Cana's long journey of discovery — right back to her beginnings 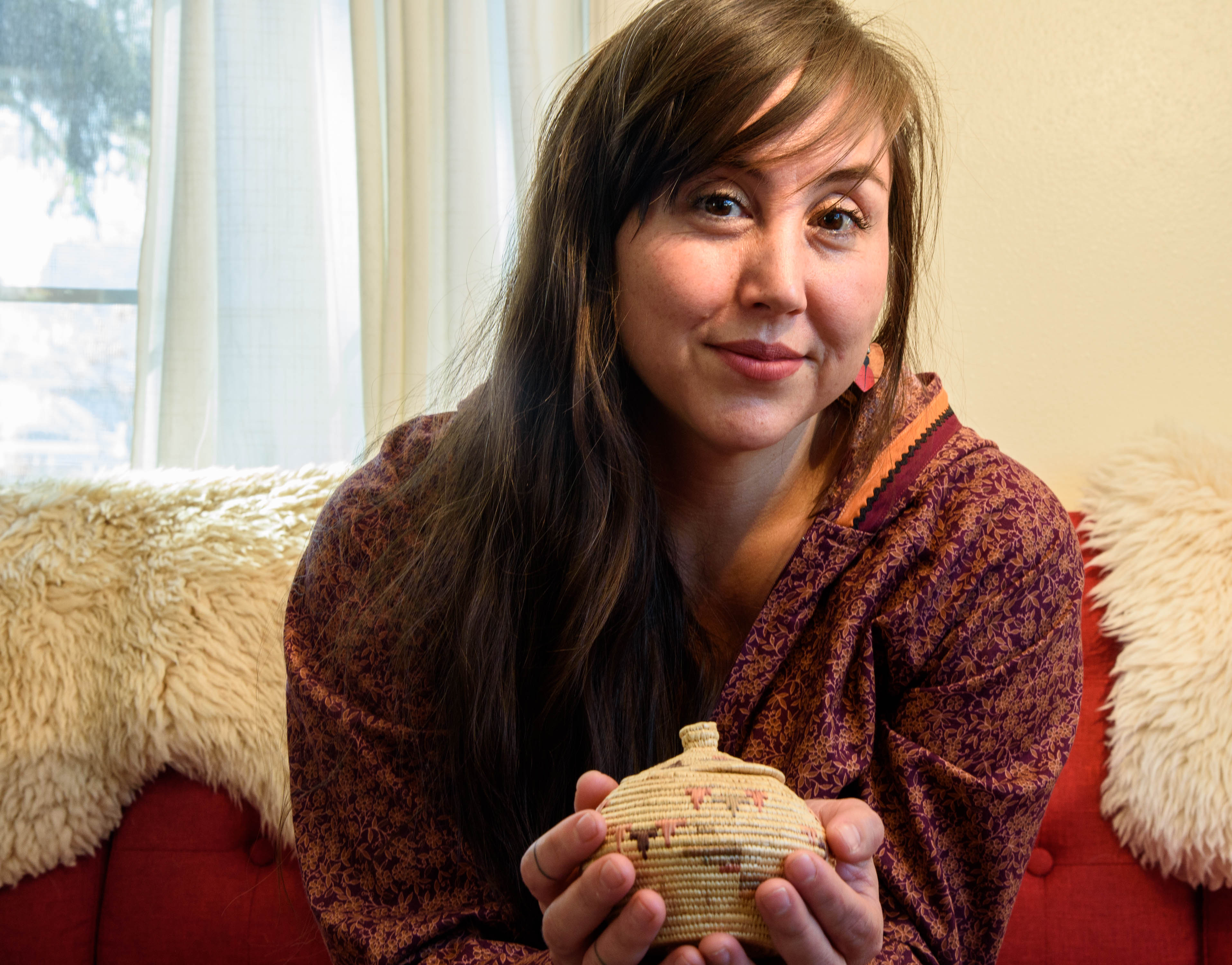 Technical Communication graduate student Cana Itchuaqiyaq has seen no representation of her Iñupiat culture in academia, let alone representation of other people of color on college campuses. (Photography by Jeannie Thomas)

Technical Communications student tried to avoid the 'cliche' of studying her own culture, until a professor asked, "If not you, then who?"

As a child, she roamed the willows and marshes until the sun set in the early morning. In winter, when day was only dusk, she walked along shrouded paths with the confidence of an owl.

She worked alongside the women in her family, preserving salmon, gathering berries in the slim summer months, harvesting seal meat in season.

It was only when she left her home on an isolated Alaskan peninsula and traveled south of the Arctic Circle to attend high school did Cana Uluak Itchuaqiyaq feel the tinges of what she now understands to be shame.

Although her teenaged self couldn’t put a label on it, she felt diminished — by her otherness, her culture, herself.

Cana, a member of the Iñupiat Tribe of NW Alaska, had begun to spend school terms with her biological father, an Alaska Native from the Yupik tribe, after he moved to the Bay Area.

She did well in school and in her senior year was accepted at the University of California Berkeley. “Everyone was talking about these fancy colleges they were going to,” she remembers. But at Cana’s own good news — Fiat lux, Berkeley! — others responded with a nod and whispered, “Ah, affirmative action.’”

That college experience didn’t last long — she soon dropped out. Looking back now, she says, “I just didn’t realize how much I had embodied shame, this expectation that I would be ‘less than’ as a student, that I didn’t deserve a place at that university.”

The disconnect grew in many small ways.

For one thing, she noticed that people never talked about her Alaska Native culture, as if it doesn’t exist. Now in the Department of English’s doctoral program, and a student for many years, she remembers only a couple of instructors who were people of color, and never a fellow Alaska Native. In her many Native American Studies classes, never once did an instructor mention Alaska’s indigenous people, she said.

And she’s had to be a consistent defender of her Iñupiat culture, which was well established well before Julius Caesar came to power. A description of her family’s traditional subsistence farming and hunting lifestyle often elicits a comment from a listener like, “But … seals are so sweet.”

It was only at Utah State University that her mentors in Technical Communications encouraged her to identify and confront those “less-than” feelings and find a purpose in her experiences.

Privileges of being ‘white passing’

“I had embodied, like, a cultural shame,” Cana says. “I hadn’t realized it.”

Further complicating her self-image was the trait that sets her apart from other Iñupiat people, even her siblings: She’s what her indigenous community calls “white coated” or, sometimes, “white passing.”

But while that complicates an already complex social situation, it also provides clarity.

“The privilege that’s been given to me as a white-coated Native person changes everything,” she says. “I’m very aware of how privilege works in my life, in good ways and negative ways.”

Cana married, changed her surname to a solid Scots-English name, and moved to Boston where her husband worked on a doctorate in geology at Massachusetts Institute of Technology.

If, at that point in her life, she let others make their own assumptions, it was because it was “easier” and, sometimes “safer,” she says now.

In Boston, Cana was accepted at Harvard University and earned an undergraduate degree in environmental studies, focusing on how climate change reshapes indigenous communities, as well as how carbon pollution affects subsistence hunting.

But job opportunities moved the family back west in 2006, this time to Idaho. In the years that followed, Cana earned a master’s degree from Idaho State University in Technical Communication, the study of how meaning is conveyed in the written texts — instruction manuals, web sites, job application forms — we encounter routinely. Cana zeroed in on aging, she said, “and how aging tropes can be oppressive.” She thought she’d found a real passion.

Scholarship with a focus on social justice

USU’s Technical Communication and Rhetoric program, housed in the Department of English, is solidly oriented around social justice and the ways formal, business and technical writing can inform, but also harm, vulnerable groups. In 2016, this attracted Cana to USU because it fit neatly with her continued analysis on seniors and how they’re addressed in documents and forms.

Though still ostensibly studying aging, Cana’s spare time was often spent on Native social media, and her contributions to discussions and online forums always seemed to drift to something like, “Well, at home in my village, this is what I see.”

Soon, this tendency of Cana’s to circle back to her Iñupiat culture and related themes was noticed by her mentors, Dr's. Keith Grant Davies and Jared Colton (professor and associate professor, respectfully, of Technical Communications).

“I didn’t even realize it until we had conversations about it,” Cana laughs now. “But it started becoming really obvious that this is where my heart is.”

Perhaps, the professors suggested, she should shift her research focus to the impacts of official communication, of any kind, on Alaska’s indigenous people.

But she remained hesitant, she says. “I was, like, I don’t want to be this cliche, ‘I’m a Native person studying Native people.’”

She remembers very clearly the response from Davies: “If not you, then who?,” he told her. “Who else is going to talk about this?”

Cana points to a “deep lack of representation” of people of color throughout academia — both in front of the classroom, and in the desks.

This lack of representation exists not only on university campuses but in the vast majority of decision-making groups, whether federal, municipal or academic.

And underrepresentation, said Cana, can result in written communication that perpetuates oppressive outcomes.

One looming example, says Cana, is the 2020 U.S. Census and the debate about including a question on citizenship.

The question is not just about being counted, but about “feeling safe or not feeling safe,” she said. The census form “carries meaning about what is valued in the United States — citizenship. It is not neutral,” she said. Indeed, such a question actually “shapes reality.”