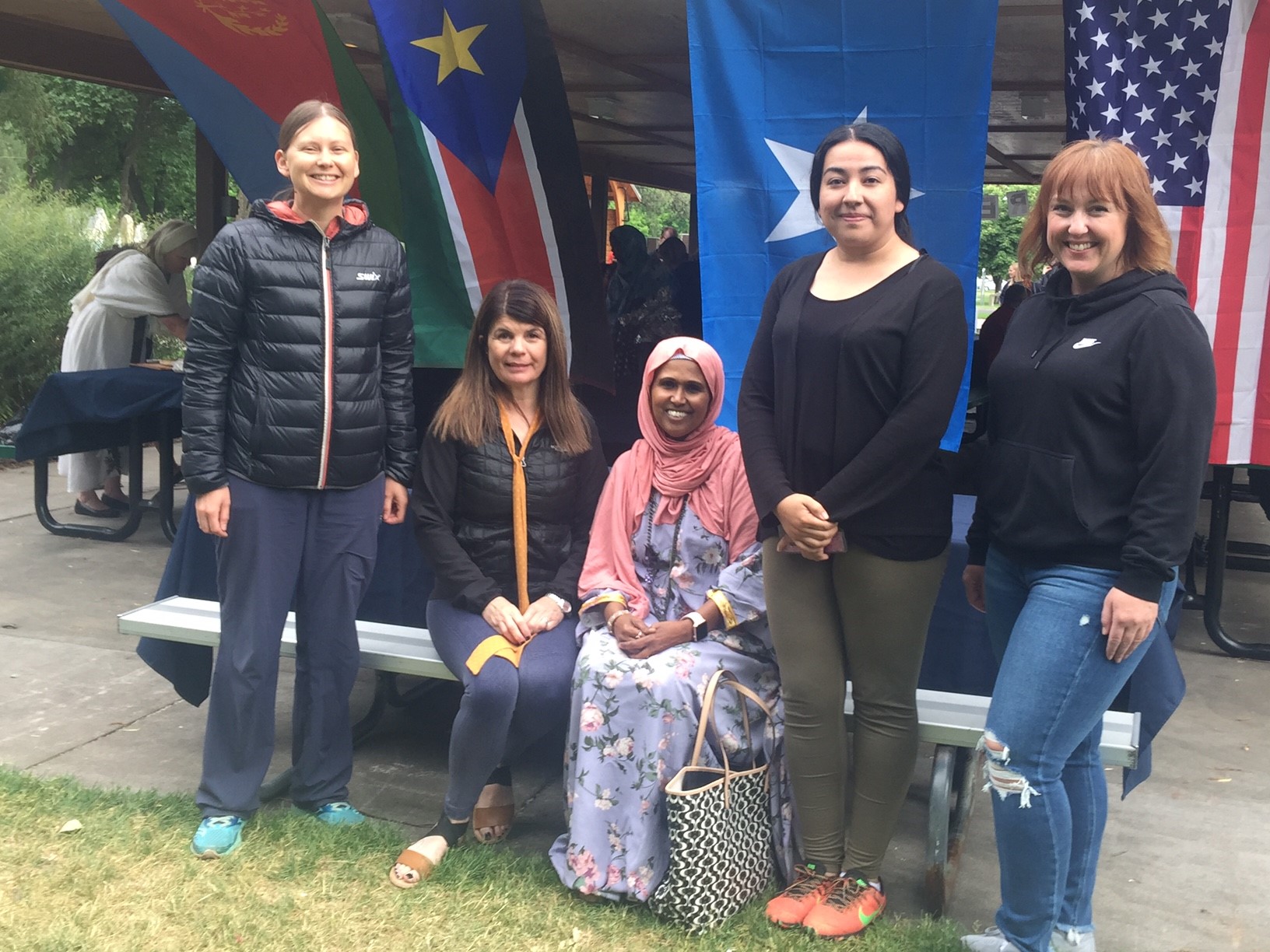 Amid the hugs, waves and ethnic dishes at a recent Cache Valley summer gathering, something else stood out:  a sense of community. People clad in Levis and T-shirts and those wearing vibrant tropical colors were eating and laughing together.

The occasion was the First Annual Cache Valley World Refugee Day celebration at Logan’s Willow Park. A crowd of more than 100 people, as estimated by co-organizer Randy Williams, snacked, gamed and chatted.

June 20 was designated in 2000 as World Refugee Day by the United Nations General Assembly. The intent was to draw attention to the millions of refugees and others who have been forced to flee their homes due to war, conflict and persecution.

And although Cache Valley has been home for refugees for those two decades, this is the first such gathering hosted by the Cache Refugee and Immigrant Connection (CRIC).

CRIC, a non-profit, was formed in 2013 by an all-volunteer refugee community council to help bridge gaps in services felt by local refugee members who relocated to Cache Valley and as such lost the social services offered in the Salt Lake area, said Williams. Operating out of a car and gracious partner locations, like the Logan Library, several churches in Logan, and Neighborhood Housing Solutions. In 2017, CRIC opened the doors to their own space located at 429 S. Main, Suite 1, Logan.

USU is well-represented in CRIC leadership. Along with Williams, the board includes its current president, Jess Lucero, an associate professor of Social Work; Nelda Ault-Dyslin, CRIC founder and secretary and coordinator for USU’s Val R. Christensen Service Center; Eduardo Ortiz, a researcher with USU’s Center for Persons with Disabilities; Amanda Barrandey, a social worker and therapist with USU’s Sexual Assault and Anti-Violence Information (SAAVI); Lorien Belton, who works with a variety of USU departments on communications and strategic planning efforts; and Flora Shrode, retired USU Librarian. Board members include Halima Ali, a community organizer and advocate for the Somali refugee community; and Teri Painter, a retired Logan City School educator.

Williams defined a refugee as an individual “who is forced to leave their country of origin because of persecution, war, or violence.” A refugee petitions to enter the United States from outside its borders, such as from a refugee camp, while asylum seekers are already in the United States when they file for permission to stay.

As an example of the latter, Halima Ali and her husband left Somalia in 1989 to attend USU. A short few years later, however, the Somali Civil War made their return too perilous, and they sought asylum, Ali explains in an interview at the dinner.

Ali said the majority of refugees who arrive in the United States are shocked and malnourished. She points to a woman standing nearby, who is wearing the traditional scarf-like guntiino. Halima explains that this mother of eight children came to the United States from a refugee camp where her husband had died. The husband, she said, “was getting little money. It was not enough to buy food for the whole family.” So he gave up his mite to better feed his children, and died before the family realized his sacrifice.

Salt Lake  City is a designated “resettlement city” by U.S. refugee rescue organizations, and it’s the only one in Utah. However, Cache Valley attracts many refugees because of job opportunities, desire to join family members, education, and safety, said Williams. Of the millions of refugees in the world today, only 1% of refugees are eventually resettled. In 2018, the United States allowed entry to 23,000 refugees.

Along with hosting community events, CRIC offers weekly walk-in hours at an office in downtown Logan, where staff and volunteers work with refugee and immigrant community members to apply for jobs, fill out forms, and other social network, said Williams. CRIC also offers a citizenship and driver’s license clinic. In addition, CRIC operates a thriving community garden, where refugee families are able to plant and grow foods they are familiar with while they build community with other gardeners.

Refugees are actually a gain for a community – they strengthen the fabric of Cache Valley as they contribute to the economic, social, and cultural vibrancy  of our community. “The refugee community and the larger community,” Williams said “support each other by sharing homeland information, friendship, and, like with the World Refugee Day celebration, food. Like all friendships it’s a reciprocal endeavor.”

Read more about, including how to get involved, the Cache Refugee and Immigrant Connection at https://www.cacherefugees.org/.