Understanding Love in the Swenson Way 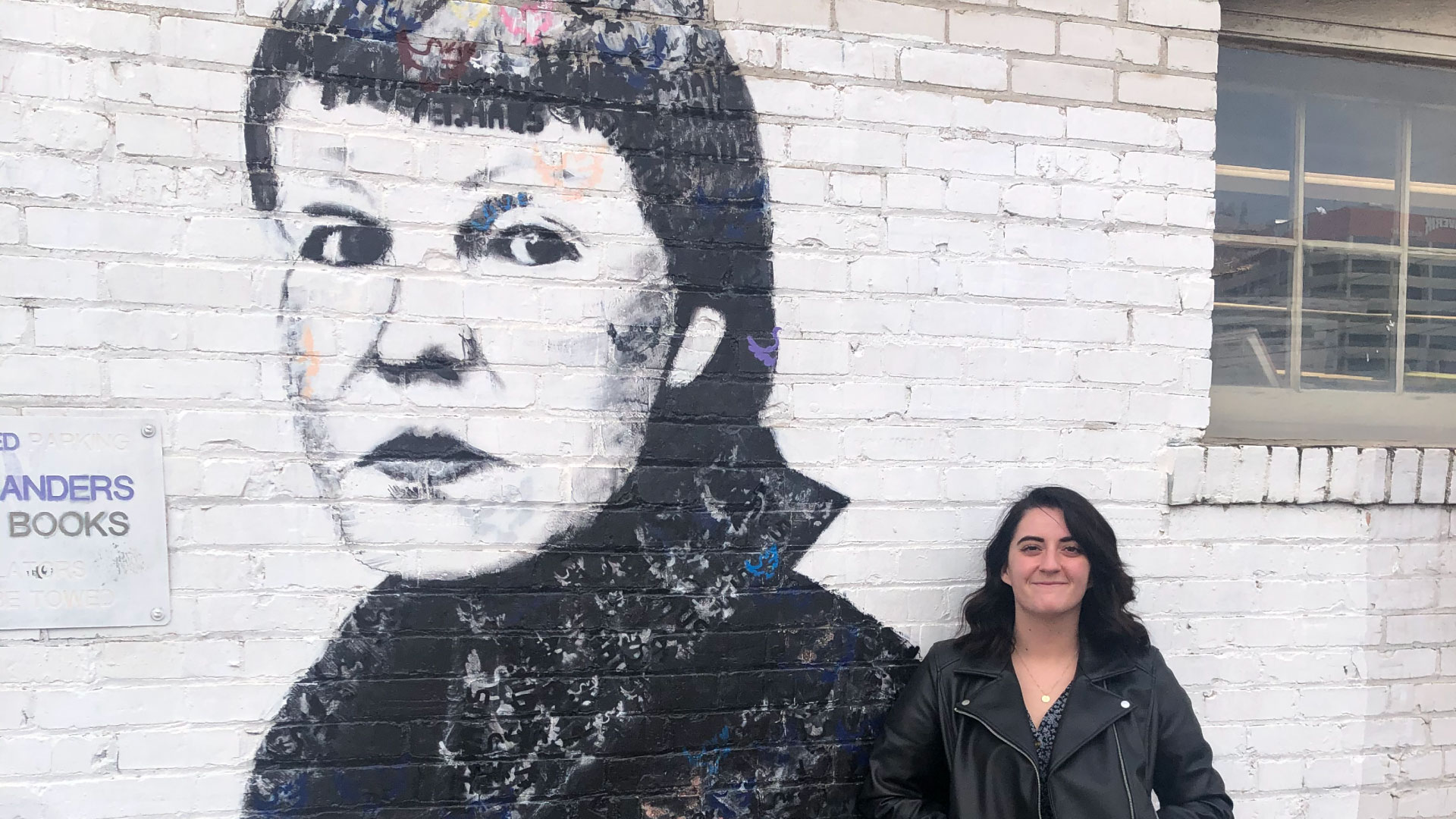 Photo: Tegan Durfee, senior at USU majoring in English literature, next to wall art of USU alum May Swenson.

Tegan Durfee’s undergrad research project explores the evolution of May Swenson’s lesbian sexuality as exhibited in her poetry.

To Durfee, a senior at Utah State University studying English Literature, Swenson’s work embodies the struggle of LGBTQ+ community members recognizing and accepting their identity while also wrestling with the battle of meeting expectations and pleasing others.

“At the end of the day, May Swenson was like the rest of us,” said Durfee. “She just wanted to be in love and feel comfortable in her relationship. Without meaning to, but not without wanting to, she became an icon that people can look to and say, ‘If she can do it, so can I,’ and ‘If she believes in love in any form then I can too.’”

Swenson identified as a lesbian and showcased her identity through her work, especially in her later years. In the early years of her poetry, Swenson used ambiguous pronouns to describe love but became more forthright in later work.

Want to see this student research yourself?

Through her research, Durfee specifically learned about two of Swenson’s four known relationships by studying her poems during each relationship, specifically the poems about love and identity.

“She was a long-term relationship person. She only had four romantic relationships in her lifetime,” said Durfee. “The first one I focused on was when she was an up-and-coming author. Her poetry was very heteronormative with guarded language. It was ambiguous on purpose because she knew they wouldn’t publish her work if they knew it was about women.”

“Her poetry really began to change during her last relationship,” said Durfee. “That’s when it became more explicit, powerful and engaging. People were starving for that kind of literature during the 70s and 80s.

Durfee believes that Swenson came to find herself in her later poetry.

“The question I asked myself was ‘When did she decide that it was okay to say it out loud?’” said Durfee. “I think she was always internally comfortable with her relationships, but I wanted to figure out when she was comfortable expressing it through her art.”

Swenson grew up in a family that belonged to The Church of Jesus Christ of Latter-day Saints. Therefore, her experience with recognizing her lesbian identity may be like many USU students who are members of the LGBTQ+ community.

“The way she deals with sexuality, nature and spirituality are very relevant today,” said USU professor Paul Crumbley, author of “Body My House: May Swenson’s Work and Life” and research mentor to Durfee. “These three facts of her work are very fascinating in our current moment.”

Born in 1913 and passing in 1989, Swenson lived during the rise of the gay-rights movement. She spent most of her adult life in New York, an arena for the many pivotal events in gay rights.

“Durfee was interested in how Swenson, as a lesbian writer, dealt with the many cultural forces that she had to contend with, such as her family and the publishing world, which was and is largely patriarchal,” said Crumbley. “Later, Durfee became enthralled with the courage that was required of Swenson and her determination to be honest with herself and with her readers.”

Swenson’s example can provide strength to members of the LGBTQ+ community and their allies.

“She never set out to be a pillar in the community but because of her experience as a lesbian artist, she realized it was important to expand on that representation,” said Durfee. “She realized that it was important to her community to know they could succeed regardless of their sexual orientation, gender identity or anything else that society was saying would hold them back.”

Swenson is a prominent historical figure in Logan, Utah’s history. She was raised at the bottom of Old Main Hill and received a bachelor’s degree from USU. Due to her immense success, Swenson later received an honorary doctorate degree from USU in 1987.

USU is currently beginning two projects which will pay tribute to Swenson and support the LGBTQ+ community.

A memorial to Swenson’s work, Swenson Park, is to be constructed at 669 E. 500 N. in Logan, the site of Swenson’s childhood home. The park will be designed as a place for public readings, gatherings, events and as a place for individual thought and creation.

USU is also leasing land to the Encircle organization to build an LGBTQ+ resource home adjacent to Swenson Park. The Encircle House will allow members of the LGBTQ+ community in Cache Valley to gather. Its design will pay tribute to Swenson’s life and artistic work on the outside by being constructed as a likeness of her childhood home and, on the inside, with architectural features inspired by her work.