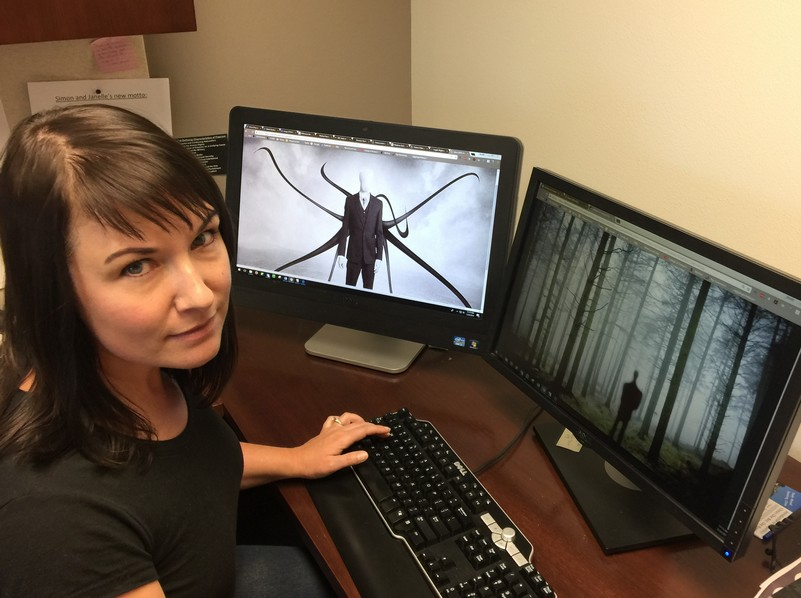 Lynne McNeill, an assistant professor of folklore, is director of the 2018 Fife Folklore Workshop this week. The workshop's theme is the sinister internet horror figure of Slender Man, known for this tall, faceless figure with long arms and who is often portrayed lurking in the woods.

If you’re 12, Slender Man lurks in the woods beyond the playground fence, faceless, taller than a slippery slide, arms and legs weirdly long, black-suited and silent.

If you're Lynne McNeill, an assistant professor of English, Slender Man is a living, evolving, endlessly fascinating example of folklore in the making.

And plus, “he is pretty creepy,” she says.

This supernatural creature — bogyman? — is “an internet horror legend,” she says. Slender Man “often shows up in the background of photos the way a ghost or apparition might. And he has an interest in children that can be nefarious.”

So it’s understandable that nonbelievers might scoff at the choice of Slender Man by the respected and internationally known Fife Folklore Workshop as its theme for the 2018 gathering.

“Folklorists like to go in and look for the patterns that form in that grass-roots culture,” staid McNeill. “And Slender Man is just an unbelievably fascinating pattern that emerges,” she said

The June 18-22 conference brings folklorists from around the country to spend a week at Utah State University mingling with undergrad and graduate folklore majors. For these students, it’s a three-credit class. For the rest of us, the workshop is an opportunity to hear public lectures by such experts as Amanda Brennan, the “meme librarian” for Tumblr, where she’s responsible for cataloging trends for the popular micro-blogging platform.

McNeill directs the workshop, which is now in its 40th year. It’s named after Austin and Alta Fife, whose fieldwork collections are the foundation for Merrill-Cazier Library’s Fife Folklore Archives, one of the largest repositories of American folklore in the United States.

McNeill and fellow folklorists have brought the folklore project into the internet age with the Digital Folklore Project, which McNeill cofounded and directs with English Department head Jeannie Thomas.

McNeill has another reason to celebrate this week: Slender Man is Coming, a collection of scholarly essays she’s co-edited, has just been published by Utah State University Press.

The legend of Slender Man is as adolescent as the children he spooks. He was created in 2009 by Eric Knudsen, a Canadian artist who accepted a challenge on the “Something Awful” website to create a supernatural creature. Knudsen’s genius, she said, was in placing the lurking, tentacle-armed creature he’d created in ordinary photos of children playing.

The seemingly innocent images were “a perfect blend of creepiness and ambiguity,” she said. “The minute they came out, people just ran with it.”

Legends, the bread and butter of folklore, thrive on ambiguity, McNeill said. Unlike the genre of fairy tale, which readers know to be fiction, a legend teeters on the edge of believability, like Bigfoot. So it is with Slender Man. Its creator gave us the basic image.

“He’s tall, he’s thin, he’s dressed in a black suit, and his arms and legs maybe, might turn into tentacles, you often can’t tell. And he has some sort of unsettling interest in children,” she said. “But Knudsen left just enough room open that people could start filling in the blanks.”

Slender Man fits another folklore standard. By definition, folklore arises from grass roots, she said. Folklore is “bottom up,” not “top-down” like books and newspapers. “Once a book is published, that’s it. That’s how it exists,” she said.  ”But with folklore you’re always recreating it, which injects this dynamism into it.”

Slender Man “qualifies as folklore because the stories, the beliefs, the images — all of these cultural artifacts — are circulating entirely in a word-of-mouth culture, person to person,” she said. 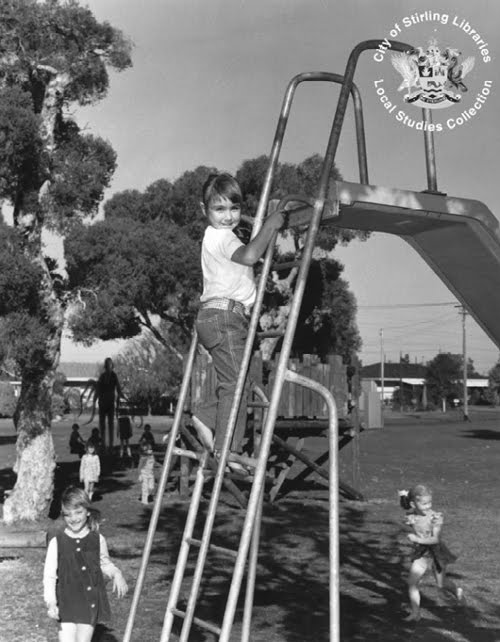 This is the original 2009 image of Slender Man created by Eric Knudsen. The caption of this seemingly innocent photo read as follows: One of two recovered photographs from the Stirling City Library blaze. Notable for being taken the day on which 14 children vanished. Deformities (in the rear of the photo) are cited as film defects by officials. 1986, photographer: Mary Thomas, missing since June 13th, 1986.

Slender Man rose to the surface of public attention when, in 2014, two 12-year-old girls in Waukesha, Wisc., lured a third friend into the woods and proceeded to stab her 19 times. The youngster lived. When police asked for a motive, the two adolescent attackers claimed they were proving their dedication to Slender Man, a task that required murder.

Slender Man has found a following among middle-schoolers and even elementary-age students, McNeill said. “They’ve heard of him — not from the internet, from their friends. He’s jumped off the screen and into our lives in this very interesting, different way.”

Indeed, some observers are noting a new phenomenon that’s been described as “slender sickness,” McNeill said. “You get the chills and you feel shaky, nervous and tired. That’s a sign that Slender Man is near you.”

If those symptoms sounds at all like a child’s reaction to bullying, well, it likely is.

Folklore not only speaks to our needs and fears, it reflects the issues of the day. If it didn’t, it wouldn’t be repeated and reshaped. That’s why many folklorists prefer to study contemporary circulating traditions, said McNeill, “because so much of the meaning of folklore is in the context — who shares this folklore? What’s their tone when sharing it?”

As for her own interpretation of the legend’s meaning, McNeill gives a slight shiver. Slender Man is just genteel enough that he’d fit in in a corporate boardroom.

“You see a lot of surveillance culture,” she said.  “He’s watching. He’s rarely attacking in the pictures -- he’s standing in the background watching. It sort of reminds you of how Amazon is constantly tracking you online and then reaching for you, seeming like a business, but maybe with this scary wilderness of danger and intrigue.”

The workshop features several presentations by folklore experts that are free and open to the public. All will be held in Old Main room 119.

Public lectures on many aspects of folklore:

More about McNeill's edited volume, Slender Man is Coming, can be seen at https://amzn.to/2HRWeTc.