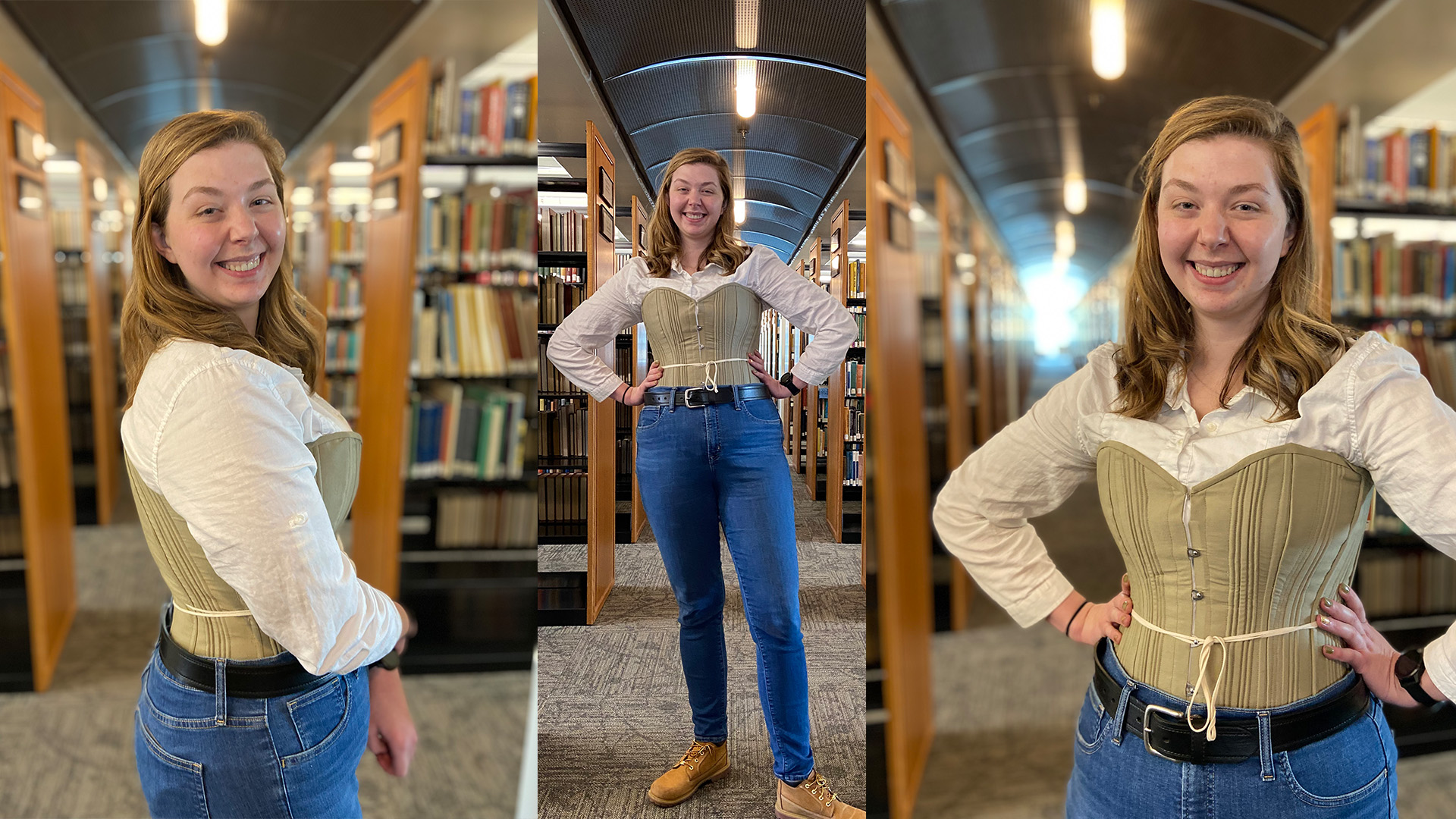 A woman clutches the frame of her canopy bed while her maid, using all the strength she can muster, tightens her corset so tightly it seems as though she cannot breathe. We hear the breath rush out of her and the zipping of laces as they brush together to do the corset up.

Sound familiar? You may have seen this scene in Gone with the Wind, Titanic, Pirates of the Caribbean, or any number of historical movies. For Rachel Walker, a history and anthropology undergraduate student at Utah State University, this cliché movie scene was the beginning of an academic journey.

“I have seen many movies and TV shows set 100-200 years ago, and there’s frequently a scene where a woman is being placed into a very tight corset,” Walker said. “I wondered how realistic that was.”

She is now months into a research project to understand the mentality surrounding corsets and their physical and emotional impacts, a venture funded by an Undergraduate Research and Creative Opportunities grant.

Her first step was collecting background information through news articles, medical documentations, first accounts of those who wore them and more.

“As a kid, I always wanted to know more about how people used to dress and why fashion has changed so much over time,” Walker said.

Through her reading, she found a common theme. Most documentation of corset wearing is from secondary, male doctor sources and political cartoons from the 19th and early 20th centuries. Interestingly, the secondary male documentation is much more disparaging of corsets than the accounts of women who wore them.

“Corsets are not the symbol of oppression that we tend to think of them as,” Walker said. “There’s a larger narrative about control, and how we think about women's bodies. I believe it’s a problem when it becomes about punishing women for doing one thing and punishing them if they don't do that thing.”

According to Walker, this phenomenon in women’s fashion still exists, in part, by the unregulated medical education in 19th-century America. Religious ideologies were frequently taught during medical training.

“I think it's time to question why these men had such a huge problem with the fashion choices of women,” Walker said. “These articles condemning corsets were written by people who believed that the uterus could wander through various abdominal cavities like a cartoon ghost. Realize this, and their arguments go out the window.”

Walker isn’t content to just read accounts of corsets, however. She’s taken her research a step further by constructing an 1890s-style corset which she is now wearing one week on and one week off for a period of three months while she records their effects on her own body.

During the three months Walker plans to wear the corset, she’ll use a smart watch to monitor her heart rate and pulse oxygen levels. She will also keep track of her level of discomfort and difficulty breathing during various activities. She’ll compare this data to baseline data she collected with a smart watch.

She hopes her research will provide historians with first-hand insight into what women experienced while wearing corsets during everyday life rather than the secondhand, male documentation that currently narrates modern views of corsets.

“I'm interested in material culture and how we infuse meaning into objects,” Walker said.

For the corset, Walker chose a pattern that was frequently sewn and worn by women in the 1890s, a pattern called “The Pretty Housemaid.” She’s now finishing up the mockup stage and hopes to begin sewing soon.

Walker is applying to national conferences where she plans to present her research findings. After graduating, she intends to continue following that passion for fashion history to graduate school.