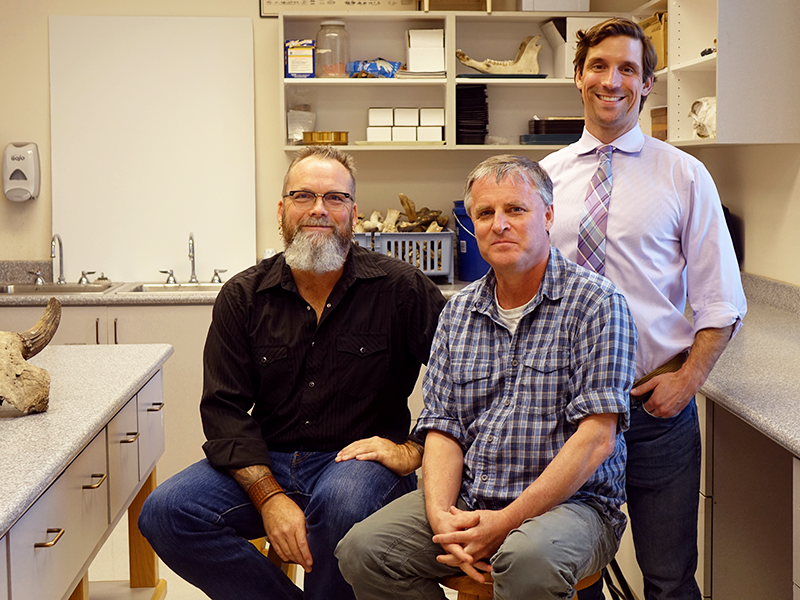 Scientists have long studied humans and their relationships with each other and their environments.

But for the first time ever, a group of anthropologists and sustainability scientists has, in a single effort, crunched data reaching back 10,000 years and over four continents.

The project began with a simple question: “Do human societies grow and decline at the same rate.” Now, following two years of research by scientists in the United States and Chile, a peer-reviewed article in one of the world’s most-cited and comprehensive multidisciplinary scientific journals reveals some conclusions.

“Synchronization of Energy Consumption by Human Societies Throughout the Holocene” was published Sept. 17 in Proceedings of the National Academy of Sciences of the United States of America (PNAS). The Holocene epoch began 10,000 years ago following the earth’s last Ice Age and continues today.

Lead author Dr. Jacob Freeman, a human ecologist and assistant anthropology professor at Utah State University, said the research pulls together radiocarbon dates analyzed in recent decades into a single model. The article hypothesizes, he says, that the process of societies creating connections and becoming interdependent affecting our modern world, known as globalization, also played out among human society millennia ago.

“If every culture was unique, you would expect to see no synchrony, or harmony, across human records of energy consumption,” said Freeman. “That’s not what we see. We can show over 10,000 years that the more interconnected societies become, their fates become more interconnected.”

Primary authors are, in addition to Freeman, Jacopo Baggio, a sustainability and political scientist at the University of Central Florida, and Erick Robinson, an anthropologist at the University of Wyoming. This work was produced as part of PEOPLE 3000, an ongoing study of the long-term growth and synchronous collapse of human societies by an international team of scholars, including archaeologists David A. Byers and Judson Byrd Finley of Utah State University.

“This is a highly collaborative effort because we’re comparing so many different regions that allow us to do this kind of big global comparison,” said Freeman.

Freeman expects the article to be a springboard for future research. “We’re cracking the door” to allow scientists to look at societies in a new way, he said.

Ironically, the charred food and bone scraps that humans throughout the Holocene discarded as worthless are the foundation of this significant research. Garbage levels reveal a society’s energy consumption and whether it’s growing or shrinking, said Freeman. “The waste we produce is a function of us living and using resources and doing all the things that we do,” he said.

Freeman and his colleagues correlated some 50 years of radiocarbon dates on prehistoric garbage and other data. The knowledge base was largely gathered through federal Section 106 laws that since 1966 have required environmental and archaeological testing on many construction sites. The decades of data were synthesized over the last five years by the National Science Foundation-funded project Populating a Radiocarbon Database for North America, led by anthropologist Robert L. Kelly at the University of Wyoming.

Because the study was so large and far-reaching, the authors brought in experts in the cultural and physical record of societies in each location. USU archaeologists Finley and Bayer are both experts on early Utah and Wyoming societies prior to European settlement.

The earth’s climate has been relatively stable since the start of the Holocene era 10,000 years ago. For some reason, though, the world’s human population exploded about 3,000 years ago, a trend that continued until 800 AD, about the time of the Little Ice Age.

This new research, said Freeman, reaches back in time beyond larger human populations, seeking to analyze the entirety of the 10,000-year-long Holocene. It’s research that’s not been feasible before.

The scientists found “the long-term trend is the same all across the globe,” said Freeman. “The story that’s telling us is that human societies over the last 10,000 years — whether they were hunter-gatherers or farmers or developed societies — have been growing in size and appropriating more and more biomass in their ecosystems. That’s been true everywhere we looked.”

They found the pattern differed for shorter-term fluctuations, those caused by such phenomenon as famine, disease or climate change. The closer societies were in prolixity, said Freeman, the each affected the others. “For societies more intertwined with each other and closer to each other,” he said, “those high-frequency events tend to ripple more.”

The authors believe their research highlights the importance of long-term perspectives that can lead to novel insights for today’s societies and help prepare us for changing global environments.

“One of the key things about our project is it’s built on really 50 years of public investment in archaeology,” said Freeman. “We’re just getting to the point where we can put these data sets together and ask big questions like, ‘Was the population in Chile between 10,000 and 400 years ago growing and declining the same way as populations in Utah?’

“We’re just now starting to ask those kinds of questions,” he said.

Freeman, along with archaeologists Finley and Byers, are part of People 3K, a working group that involves scientists nationwide seeking answers on human-environment relationships for the last 3,000 years. Visit https://anthropology.usu.edu/projects/coevolutioncpfs for more information.