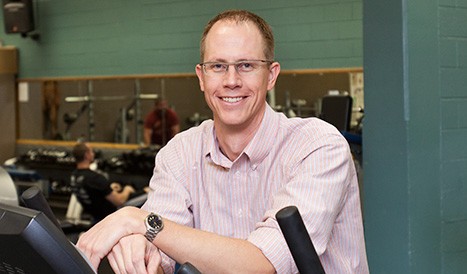 Dr. Eric Reither, a sociologist and demographer, has received a large grant from the National Institutes of Health to research whether poor sleep can result in weight gain.

A demographer in the College of Humanities and Social Sciences has received a $2.1 million National Institutes of Health grant for a subject that may seem straightforward: Are you more likely to gain weight if you’re a poor sleeper?

Straightforward, that is, until you read the grant’s actual title:  “Long-term trajectories of subjectively -- and polysomnographically -- assessed sleep patterns as predictors of neuroendocrine dysfunction and weight gain in adults.”

Perhaps surprisingly, there’s been little research on the link between long-term sleeplessness and obesity, said Eric Reither, the grant’s primary investigator and a professor of sociology in the College of Humanities and Social Sciences.

The National Institutes of Health is funding the four-year-long grant, because of the research’s potential to change public health recommendations on sleep in adulthood. If research shows “that long-term sleep deprivation leads to weight gain and higher odds of obesity, then it will provide people with another tool to help manage weight,” said Reither.

In Utah alone, adult obesity rates have jumped from 9 percent in 1990 to 25 percent in 2015. Clearly, current curtailment efforts aren’t working.

“Part of the motivation for the study is that successful weight management is more complicated than just telling people, ‘Exercise and watch what you eat,’” he said. “That hasn’t been a very successful approach.”

Because of the NIH’s reputation and influence, its research grants are highly competitive. According to Reither, the NIH seeks to fund the most innovative and scientifically rigorous research across a wide range of health issues. Its goal, he added, is research that has “the potential to make a real difference in terms of both the quantity and quality of life for U.S. citizens.”

Among children and adolescents, the evidence for a link between sleep and obesity is well established. But for adults, several short-term studies have provided conflicting results. Reither seeks to pin down the long-term effects.

“There are unanswered questions about how sleep impacts weight gain among adults in midlife and later life,” said Reither.

While most sleep studies focus on duration, Reither will also look at the more elusive issue of sleep quality.
“There’s data indicating that sleep in the United States has deteriorated over the past few decades,” he said. “That might just be a coincidence with the obesity epidemic, but it suggests there could be some links between those things.”

Reither and his co-investigators have access to an unusual and remarkable database that provides a stable, long-term perspective: the Wisconsin Sleep Cohort Study (WSCS). In 1988, researchers selected a random sample of 1,500 Wisconsin state employees and have followed them ever since. Now, 30 years later, this population of public employees has hit retirement age.

The result is a “large, population-based sample with unparalleled measures of sleep duration and quality,” said Reither.  “We also have quite a bit of statistical power, which gives us the ability to detect associations between sleep patterns and weight gain over time.”

Reither is working with a team of scholars at the University of Wisconsin-Madison who are associated with the WSCS. Reither is also collaborating with researchers and lab technicians at Stanford University who will retest  the frozen blood samples of WSCS participants to identify hormones that were not included in earlier testing. This information is important because, he said, appetite-regulating hormones may provide a crucial link between sleep and weight gain.

For example, ghrelin—a hormone produced in the stomach that alerts the brain when you’re hungry—tends to increase in response to sleep deprivation. In addition to ghrelin, Reither’s team will study half a dozen other hormones that may link sleep problems to adult obesity.

If such scientific research and major funding from the nation’s primary biomedical and public health agency seem a misfit in the world of humanities, Dean Joseph Ward of the College of Humanities and Social Sciences said the social sciences are vital to deciphering data to help actual humans. The grant, he said, “highlights the significant contribution that social scientists can make to promoting health and wellness research.”

Reither estimates that gathering and organizing these biological data will consume about two years of the four-year grant. Once the new, raw data is collected and added to WSCS databases, Reither will use his skills as a statistician and epidemiologist — an individual who researches the causes of diseases.

The grail, he adds, is determining whether “sleep habits have clear connections to weight gain over long periods of the adult life course.”

If such a link is established, the public health implications would be significant. “It should help us better understand the U.S. obesity epidemic,” he said, “and what part of that is attributable to sleep.”