Partnered with a professor. Better prepared for life. 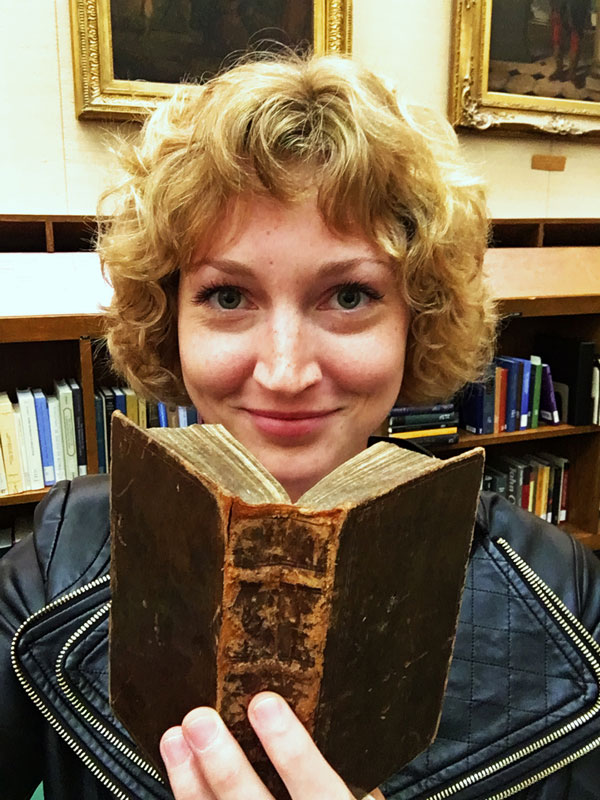 It took only a summer for senior Arie French to transform from a guy taking history classes to a researcher confident in his ability to analyze centuries-old census records — in French.

College to career, learner to doer: It’s always a leap of faith. And for many of us, the transition is fraught with uncertainty and indecision.

French crossed safely, however, using stepping stones and the helping hand of a mentor, thanks to a new program offered by the College of Humanities and Social Sciences. The initiative, Faculty-Student Summer Mentorship Grants, partners student scholars with professors for a deep dive into research and collaboration.

For French’s part, he was “instantly hooked” by the idea of working with Julia Gossard, an assistant professor of History who researches the daily lives of children in the 17th and 18th centuries.

French invested long summer hours in culling and translating census records to trace French children who were forcibly transported to North America. He gained a solid footing in research methods, and his mentor, Gossard, acquired new research for an upcoming academic book.

With the program’s first summer concluded, CHaSS administrators say they’re pleased and satisfied at the response and results. All told, nine student-teacher teams received research grants; one other team earned a teaching grant that resulted in a summer camp for young Chinese-language learners.

The program awards grants of $2,000 to students who apply and are accepted as a team with a faculty member. The grant buys them the time they’d normally be clocking in for a summer job to pay for tuition. Especially appealing to Dean Joe Ward is that the grants open the unmeasurable benefit of mentorship to students whose life circumstances don’t allow them the luxury of a summer off.

Faculty members receive $1,000 to compensate for their additional time.

Matt Sanders, an associate professor of Communication Studies and a CHaSS associate dean who with Dean Ward created the program, describes the grant program as “college plus.”

“The classroom is a great opportunity to learn and connect with professors,” said Sanders. “But there’s something different when you’re working one-on-one. It can transform a student into a learner and independent scholar.

“As I’ve talked with students coming back from these projects, they’re really …,” he pauses to search for a word. “They’re different.”

The idea is to place students at the right hand of professors as co-researchers in new and significant research. In the case of Communication Studies professor John Seiter, for instance, the research he and student Megan Chandler completed will result in a co-authored academic paper.

Seiter himself is pleased enough that he’s planning future summers as a mentor. “How many students actually get that opportunity to work one-on-one with their professors?” he asked. “Not many.”

Sanders was fortunate enough to have a mentor while an undergrad at Brigham Young University. He still shakes his head in wonder at the life-changing magic it worked. “It really changed my identity as a person and as a thinker,” he said. “I started to see myself differently.”

With the award of the grant, said Sanders, a student “becomes a part of the professor’s work. As an undergraduate, they see that as a big deal — this is a person’s career, and they’re being asked to help push this research forward. It gives students more confidence.”

While research itself is the means of the program, the end is something entirely different, said Sanders. “It’s more about the relationship than the research,” he said.

Together, the relationship and the research help the student establish a bank of skills. Sanders lists a few: understanding process, asking good questions, finding data to answer those questions, building a well-supported argument and communicating that to an audience.

Even as technology changes seemingly daily, such skills will remain vital in the realms of business, nonprofits, public education and more. “All of these competencies from relevant research projects will translate into anything they do,” said Sanders. “That’s really the goal.”

Faculty-Student Summer Mentorship Grants fit neatly with the university’s focus on undergraduate research. USU, adds Sanders, “has a long, long history of undergraduate research, one of the longest in the country.” That’s among the reasons the CHaSS program has been embraced by the Honors Program.

The future of the CHaSS program will largely be determined by whether sources of permanent funding can be found, said Sanders. “We want to give this to as many students as we can.”
Stories about two of the many mentor-student partnerships forged in the new Summer Mentorship Grant Program.

Stories about two of the many mentor-student partnerships forged in the new Summer Mentorship Grant Program.

Research subject: What do parents hope to convey through the types of stories they tell about their children? 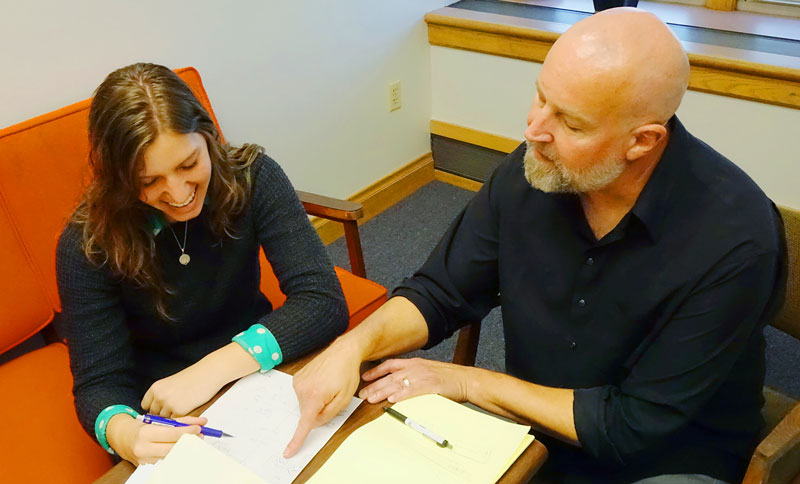 Were you a rascally kid who stole the whole cookie jar? Or maybe a grade-school reader who sneaked a flashlight under the covers?

Your parents had you pegged. And these are likely the stories they told to others about you.

The question is, how do those family stories — called “third-party impressions” by researchers — affect you later on.

John Seiter studies the give-and-take between individuals. Lately he’s specialized in interactions within the hospitality industry – what, for instance, makes you leave a smaller-than-normal tip.

The Communication Studies professor teamed with student Megan Chandler during the summer on another ongoing project, this one relating to third-party impressions.

There are plenty of people in everyday life who try to influence what others think about us. These third-party impressions might show up in gossip and office chit-chat.

Seiter and Chandler decided to take a closer look at a specific kind of third-party impressions — the stories parents use, often unwittingly, to create impressions in others’ minds about their children.

Now, a few months later, Seiter and Chandler are still busy analyzing the results, sorting stories into categories and drafting conclusions. They’ll be compiled into a proposal — tentatively named “Insert Fancy Sounding Title Here” — that will be submitted to a conference. If accepted, Chandler will present the research at a 2018 conference in Toronto.

Chandler and Seiter conducted more than 60 interviews with research subjects. Their target question, said Seiter, was: “What are the identities that parents are assigning to kids and the impression they want other people to form about their kids.’”

It’s all part of a larger project Seiter is co-researching with Kristina Scharp, assistant professor of Communication Studies. Scharp herself participated in the new Summer Mentorship Grant program with student Sidney Williams, exploring the related question of what stories are told by parents of deaf children.

Seiter said he suggested the Summer Mentorship Program to Chandler because of her thoughtful responses in class. “She is quietly insightful,” he said. “Megan listens very carefully, and she’s super good at applications.”

As they finalized the parameters of the research during their brainstorming conversations, said Seiter, “many ideas emerged through Megan’s insightfulness.”

Chandler says she’s still undecided about attending graduate school. But if she chooses that route, said Seiter, “having done this project, she definitely would be more prepared.”

Research subject: The forced immigration of French girls to North America, looking at two separate historical incidences: girls transported to Canada in the 17th century and a group sent to Louisiana in the 18th century. 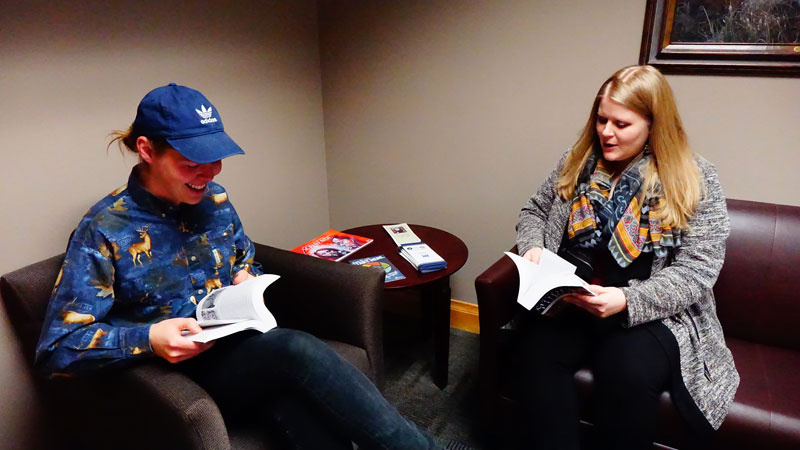 In one of those oddball quirks of history, the young women who arrived in New Orleans about 1720 and then housed in a Catholic convent were, according to legend, vampires. “I’m trying to figure out why they thought these women were vampires,” says Julia Gossard, assistant professor of history.

More than likely, she speculates, these women had taken sick with dysentery and scurvy during their rough sea voyage from France. “They would have been very pale, blood shot eyes,” Gossard said. “But to a foreign observer, seeing these women brought in and sequestered in a religious place, it would have looked like: ‘Clearly, the nuns have to keep the vampires in.’”

Well, perhaps not that clearly, as senior Arie French discovered scouring 18th-century census records written in scrawled and cramped English punctuated with French creole. After a summer transcribing and translating old census records, French (the student) has become a pro at using French (the language) he picked up in high school and during a study abroad.

The database that’s expanding with French’s detailed-focused work is vital to ongoing research that will become part of a book manuscript, says Gossard. The book, to be titled Coercing Children, discusses “children who acted as agents of social reform,” she said.

Hiccups are common, says French, because the records were inconsistent — some documented whole households, including slaves, while others just noted the profession of the man in charge. “So you’re taking all these things and putting them into one spreadsheet,” he said. “That was a challenge: How do you get all these different records to say something that’s worth saying?”

The research will hopefully answer at least one question: Why were these young women compelled to sail to Louisiana against their will? One possible reason, says Gossard, was that “they were poor and living in charity hospitals, and the state couldn’t take care of them anymore.”

That’s one mystery about exiled French women and girls under the research partners’ microscope. (Gossard notes: Although some of females in both historical instances may have been up to 25 years of age, they were considered children because they were unmarried and often wards of the state.)

The second riddle involves the transport of girls to Canada, then New France, in the 1620s. Perplexing, the girls were all citizens of Dieppe on the northwestern coast of France and emigrated within the same timeframe.

Some records tantalizingly hint that the female prisoners were part of some “active protestation” in Dieppe. Plus, says Gossard, French documented patterns in the database indicating that “these were super-wealthy, probably socialite women who were being sent over forcibly.”

What was this intersection of politics, religions, migration and perhaps economics? “We’re trying to fill in the gaps,” said Gossard.

These women have come down through history as the “mothers of Canada,” she added. “Canada has a long history of revering these women. So we’re trying to give them names, faces and stories.”

At the time he was awarded the mentorship grant, French had already taken classes on research methods and theories. “I was thinking I had a good idea of how to do research, how to database and how to document everything,” he said.

“But, I swear, after my first hour of doing this databasing project, I realized I had no idea of what any of it was,” he added. “You can think of it in an abstract way, like someone else is doing the work. But it’s so different to actually be the one who’s spending hours upon hours databasing and digitizing these records that are all in French prose.”

French is considering graduate school as an option, and lately, he adds, “I’ve been looking into things like the Peace Corps.” He graduates in spring 2018 with a double major (History and Religious Studies) and a double minor (Anthropology and Asian Studies). “The thing I really like about my history degree is I can go a lot of different avenues with it.”