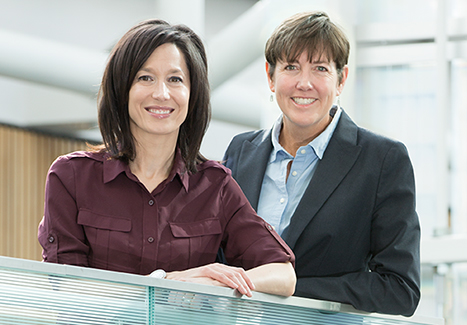 Research on women in the world of business, conducted by the interdisciplinary team of sociology professor Christy Glass and business professor Alison Cook, has been used as an authoritative source by the New York Times.

This story originally appeared in the Aug. 17, 2017 issue of Utah State Today.

In recent years, some women have broken through the business world’s glass ceiling, that invisible barrier keeping their sex from rising to such positions as CEOs of Fortune 500 companies.

But, when women executives do reach the ladder’s top rung, they’re finding “shaky ground,” according to an in-depth, front-page article in the New York Times.

In the Aug. 3 article, “Even After the Glass Ceiling Yields, Female Executives Find Shaky Ground,” writer Julie Creswell describes such recent newsmakers as Avon CEO Sheri McCoy and Yahoo’s Marissa Mayer. They are among the story’s whos. For the whys, Creswell turned to ongoing research by Christy Glass, a sociology professor, and her co-researcher, Alison Cook, an expert on team management in the Jon M. Huntsman School of Business.

It’s an issue that requires experts in both sociology and business to explain. Glass is in the College of Humanities and Social Sciences.

As Glass told the New York Times, merit may earn women these top jobs, but they often don’t receive the support or authority needed to run such companies.

Cook agrees. The many women executives she and Glass interviewed for their research said “they had to work twice as hard as their male counterparts, they were more prepared for meetings, and they were always under scrutiny,” Cook explained.

“This is one of the main issues for women in leadership, since it is such a rarity,” Cook said. “Women are under a microscope. Their credentials are superior to their male counterparts, but their authority is questioned more often, and their visibility makes any ‘hiccup’ a major occurrence.”

The New York Times article details such recent “hiccups:” Sheri McCoy, for instance, forced by activist investors to resign as CEO of Avon. Irene Rosenfeld, as well, is leaving her position as CEO of Mondelez International, maker of Oreo cookies and Ritz crackers, because of unsupportive investors.

As Glass explains in the article, women are often selected to “fix” troubled companies because, she said, they “feel they must take on the most risky, challenging roles.” But such a strategy, the article explained, is a doubled-edged sword because of the higher chances for failure.

Those New York Times readers commenting on the story were often unsympathetic to the situation of ambitious women. One common response, for instance, was that women were not ruthless enough to survive in a dog-eat-dog environment.

Cook observes that this is a “double bind” for women – they’re criticized when they do indeed take a forceful approach. “It seems that to get to the top, you need to be ‘ruthless,’” she said, “but when women are ruthless, they are penalized.

“Women are expected to fit the social norms of femininity and be more warm and collaborative,” said Cook, “but as a leader, masculine traits, such as competition and aggression, are considered superior.”

Another common theme among the New York Times readers was something Cook said she also encounters regularly. One commenter put it this way: “‘Women aren't on top because it eats at our core values.”

Indeed, said Cook, “women have been shown to be more ethical and principled leaders than men.” Their ongoing research, she added, “has shown benefits to organizations from having women as leaders.”

Such a benefit is happier employees. “We have also shown women are better for transparency of corporate governance, LGBT benefits, work-family benefits---and the list goes on,” Cook said. “Women do bring something unique to leadership that tends to be more ethically focused and more long-term focused.”