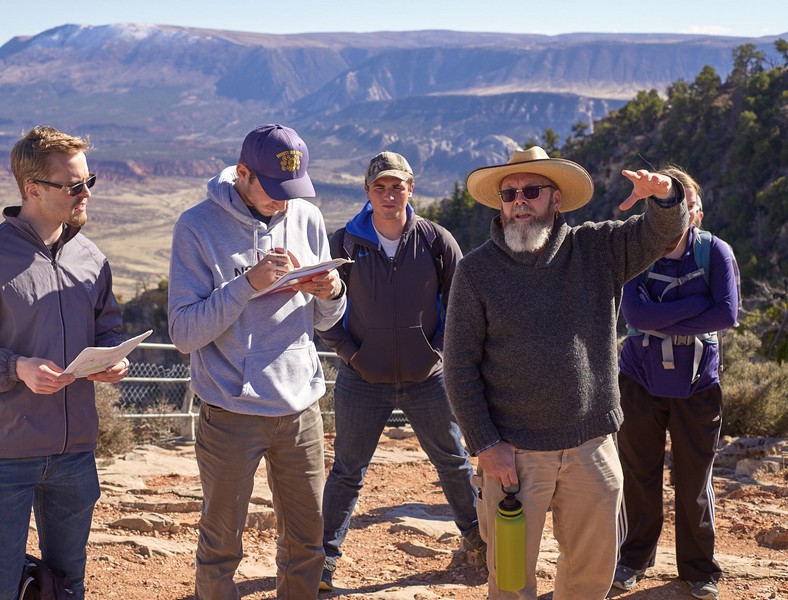 Archaeologist Judson Finley speaks with students on an outing to Dinosaur National Monument in December. Finley, an associate professor of Archaeology, is among the organizers of a seminar bringing scholars from around the world to nearby Vernal to discuss what archaeology can tell us about the future. A public  open house and exhibit at the Uintah Basin Memorial Museum will conclude the conference on May 23. (Photo credit: Andrew McAllister/USU)

View a flyer about the event on May 23

A group of archaeologists and ecologists from around the world is looking at population and climate shifts in the past to determine a path through an uncertain climate future sure to bring food insecurity.

The approximately 16 scholars will meet next week for a conference at a Utah destination where the past is always present: USU’s Uintah Basin campus in Vernal, dinosaur country.

Luckily for the rest of us, there will be show and tell in the form of an open house at the Uintah County Heritage Museum showcasing Fremont Indian artifacts.

The public is invited to the open house from 4 to 7 p.m. Thursday, May 23, at the museum, 155 E. Main, Vernal. An exhibit will feature the Leo Thorne Collection of artifacts gathered in the 1920s and 1930s belonging to the Fremont, an umbrella term given to the Native peoples who farmed and hunted in Utah between about 450AD and 1150AD.

There will also be a panel discussion between many of the scholars attending the conference, as well as local stake holders including Utah Rep. Scott Chew, a local rancher; Betsy Chapoose, cultural liaison for the Ute Indian Tribe; and James Taylor, associate vice president of USU Uintah Basin’s regional campus.

The week-long conference, centered on climate-smart food systems, is sponsored by People 3000, an initiative founded by USU archaeologist and assistant professor Jacob Freeman in 2016 under the auspices of Past Global Changes (PAGES), an international union of scientists designed to focus not so much on research, but on implementing solutions.

The working group itself is called The Paleoclimate and the Peopling of the Earth Working Group. Scholars are attending from such diverse countries as Norway, Argentina, Chile, Germany and more. Organizer Judson Finley, an associate professor of Archaeology at USU, said People 3000 looks at the last 3,000 years of human existence to trace how human population has risen and fallen in response to food insecurity and climate – and how humans have responded.

Vernal was chosen as the international group’s gathering site, Finley said, because of its “fantastic archaeology and beautiful scenery.” Finley has long studied Native settlements in Dinosaur National Monument and surrounding areas and notes that these long-ago farmers, like today’s farmers, exist at the environmental margins of agriculture. “We can learn important lessons from strategies that succeed and fail,” he said.

Finley said the People 3000 initiative was created to bring scientists from around the world who study similar problems of social change in the last three millennia. “We’re really trying to develop and use archeology as a way to inform policy as we move forward regarding climate and food security issues,” he said.