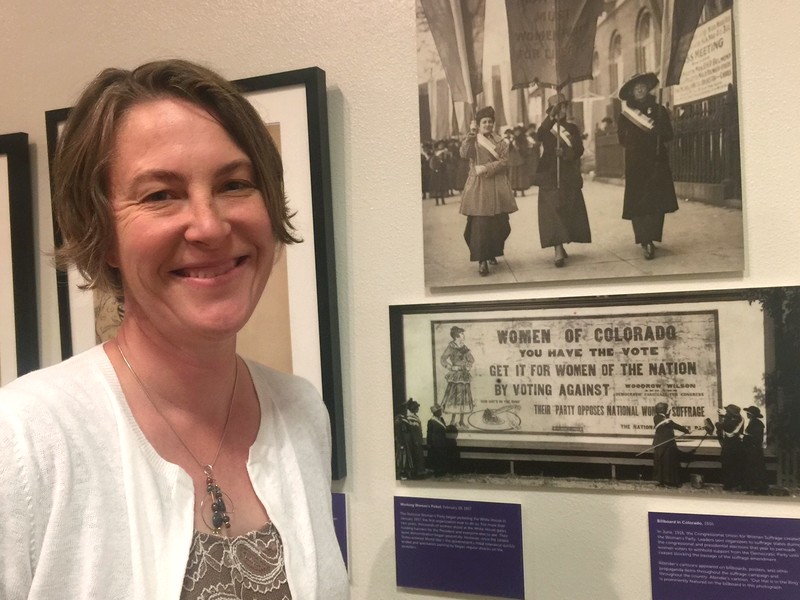 Molly Cannon, director of Museum of Anthropology, with items in the new exhibit, "Women Speaking to Women: The Political Art of Nina Allender," which continues through Aug. 30.

In the early 20th century, artist Nina Allender defied traditional American beliefs that women were only cooks and caregivers by using the pointed humor found only in cartoons.

One of her editorial cartoons, drawn in early World War I, depicts a woman in what looks like a post office, presenting a multitude of letters to the post master (Uncle Sam). The letters have such labels as patience, Red Cross, thrift, patriotism, courage, sacrifice and home fires. At the bottom, the words quote this “American woman” as saying: “Is it not enough?”

In 2020, Americans will celebrate the 100th anniversary of the 19th Amendment, guaranteeing women the right to vote. But the victory was gained in decades of brain- (and -barn) storming, public speeches and banner-waving.

A new exhibit at the Museum of Anthropology reminds us of that years-long progress with a showing of original work by Allender (1873-1957), cartoonist for The Suffragist, a weekly news tabloid published by the National Women’s Party in Washington, D.C.

“Women Speaking to Women: The Political Art of Nina Allender” continues its showing of original art and photos through the end of August.

The cartoons, said museum director Molly Cannon, explain to the public that “while the government is fighting for democracy abroad, we don’t even have it here at home.”

The exhibit is free to the public and open from 10 a.m. to 4 p.m. on weekdays. But this exhibit includes the unusual treat of docent-led tours once a week, said Cannon.

The guided tours at 2 p.m. each Tuesday will give members of the public a chance to go beyond the usual museum read-and-see. Each tour will be about 20 minutes long.

The museum has long offered docent-led tours, which can be scheduled through its website.

“But with this particular exhibit,” Cannon said, “we wanted to get a bit more exposure by offering these regular tours.”

Docents include Candi Carter Olsen, associate professor of Journalism and Communication, as well as graduate students and museum interns.

Cannon describes Allender’s drawings — she was a fine artist by profession — as funny, yet often radical and provocative. The cartoons’ regular appearances in The Suffragist, published between 1913 and 1920, did what the best editorial cartoons do: use metaphor and humor to clarify complicated  political situations.

In addition, Allender’s cartoons presented a new ideal of the American woman. Allender drew women as creatures of purpose, competence and strength. The “Allender girls,” as they came to be known, were forthright young women who were “bold and revolutionary,” said Cannon.

Meanwhile, anti-suffragists at traditional newspapers continued in their quest to poke fun at women protesters by showing “these very haggard sort of frumpy looking old women,” she said.

Unlike most museums, which use traveling exhibits to keep their audiences engaged, the Museum of Anthropology relies primarily on student-curated exhibits. (The museum offers a Museum Studies Certificate for undergraduate and graduate students seeking professional careers in museums.)

This exhibit, said Cannon, presents to students a different angle at exhibit-building. “No matter where they end up, they're going to be working with other people's curated exhibits. It’s standard practice,” she said.

For Cannon, though, it’s a challenge for a different reason: As anthropologist who specializes in material culture, she’s more accustomed to handling artifacts.

Anthropology students are also working on a companion exhibit that is expected to open in July focusing on women and their representation in societies around the world, said Cannon. “They’ll be looking at the division of labor and how societies make their choices.”

The exhibit is funded by the Mountain West Center for Regional Studies and departments within the College of Humanities and Social Sciences, as well as Merrill-Cazier Library’s Special Collections and Utah Public Radio.

The Museum of Anthropology is in Old Main 225. Read more about it at https://anthropology.usu.edu/.