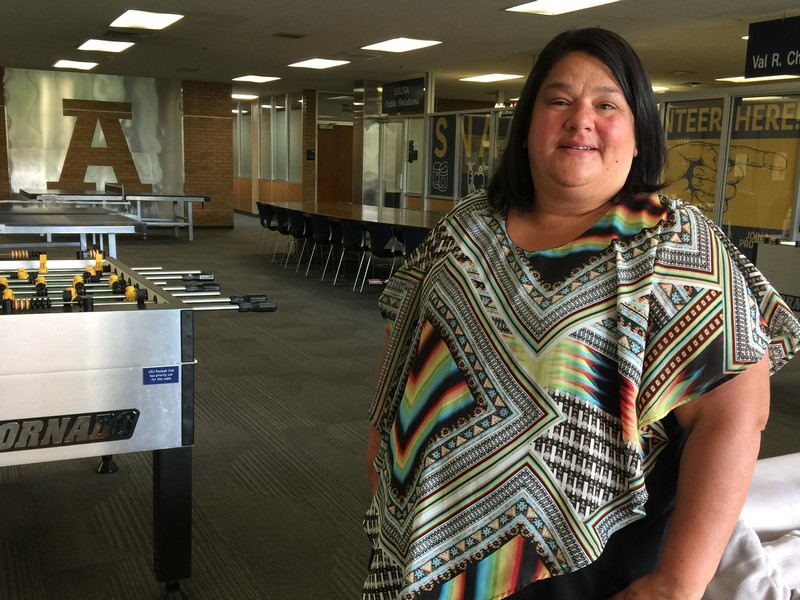 Jenny Erazo, director of Sexual Assault and Anti-Violence Information (SAAVI), has seen a large increase in the number of students seeking help after sexual violence.

You suspect you’ve been injured, but not sure how. You feel hollow, yet full to bursting. A refrain repeats, “Is this my fault?”

For a student who’s undergone some sort of sexual assault or trauma, the search for resources — and empathy — can seem formidable, impersonal and demeaning.

Utah State University’s Sexual Assault and Anti-Violence Information (SAAVI) strives is to be exactly the opposite. Its office is designed to be a safe spot, free and confidential, for victims to regroup, reflect and redirect.

Now, a new nearly $250,000 grant from the Office for Victims of Crime will allow SAAVI to knock down a few more walls by adding a full-time advocate, says Director Jenny Erazo.

That professional will join a small staff of therapists and advocates whose job it is to guide college students safely through the thicket of recovery and to reclaim the goal they came to Utah State University to achieve: to earn a degree

In this era following the conviction of former USU football player Torrey Green for rape, as well as other high-profile cases involving sexual assault and the #metoo movement, SAAVI is a much different entity from its grass-roots beginning in 2003.

Shown in this video are Kourtney Austin, an advocate with SAAVI, and Gabriela Palomino, a therapist.

National news has expanded our understanding of sexual violence, for women and men. Utah and USU are no exception. Over the last several semesters, SAAVI’s client list has mushroomed — increasing 400 percent between 2017 and 2018, says Erazo. Most of the credit goes to the university’s swift response with such awareness campaigns as “Upstanding,” which encourages bystander intervention at any sign of sexual violence.

But she also appreciates “the pipeline of students who come into SAAVI and have a good experience,” and then advise their friends to do the same when threats or actions occur.

Erazo has worked for many years to establish a complete framework capable of assisting those who need its services. The addition of a full-time advocate, as provided by the grant, she says, “provides the missing link,” she said. The advocate is the first contact with those who walk through the door, and will remain by the student’s side as they explore legal, medical and support options.

But the most important role of an advocate is to “support the person in the choices they make,” she said. “The student is always in control of their situation, and everybody's journey through this is so incredibly different.

SAAVI launched in 2003, focusing primarily on advocacy. It boasted one full-time staff member (the director) who was assisted by interns from the social work program, housed in the College of Humanities and Social Sciences. Erazo herself was one of those interns as she worked to earn a master’s in social work.

Over the next half-dozen years, SAAVI grew not only in the number of clients, but in its purpose. Along with advocacy, Erazo says, “there also became a need for therapy to address the trauma these students had experienced.” In 2013 when Erazo was named director, little had changed — she was the sole full-time, university-funded staff member.

She had, she discovered, joined an organization whose mission far overreached its capabilities. “It was incredibly overwhelming,” she says now.

“For the majority of the students, the one thing they came here to do was to get their degree. They fight to hang on to that last piece they have control over."

Erazo built the staff, grant by grant, including monies from the Utah branch of the federal Office of Violence Against Women and the Utah Office for Victims of Crime.

2018 was a banner year, however. SAAVI was moved from the Division of Student Affairs to the College of Humanities and Social Sciences, where it is now under the auspices of Social Work. And it relocated physically from the Student Health and Wellness Center to the third floor of the Taggart Student Center.

Derrick Tollefson, head of the Department of Sociology, Social Work and Anthropology, said the intent was to place SAAVI closer to Social Work’s specialized and related services.

Sexual assault and domestic violence advocacy is complicated,” he said. “We’ve worked in the field and done research in this field for years and are very passionate about this.

More importantly, though, the 2018 changeover came with a boost in university funding for a special projects coordinator and a part-time therapist. A federal grant from the Victims of Crime Act provides for a part-time victim advocate. This most-recent grant will fund a full-time advocate, bringing SAAVI’s staff to four full-time positions and two part-time positions.

An individual who has undergone any kind of sexual violence has several immediate options, some of them scary for a traumatized individual, said Erazo. The victim can report to law enforcement, whose job is to investigate and find the perpetrator, or to USU’s Title IX Coordinator for a potential violation of the university’s policy on sexual misconduct.

An initial stop at SAAVI, however, will present victims with all possible avenues, broken into bite-size pieces, said Erazo.

We help them understand their rights and how to navigate that process.” Alternatively, she said, SAAVI can do nothing, other than just be a safe harbor.

SAAVI works in the gray area of sexual trauma, the non-absolutes, that make defining it so difficult.

When people think of sexual assault, they think of ‘Law and Order’ or the person hiding in the bushes,” said Erazo. But a 2017 Campus Climate Survey on Sexual Misconduct sponsored by USU found that nine out of 10 of those who experienced sexual trauma know their assailant.

Their stories frequently begin with something like, “I was studying with a friend” or “I went with some friends to a party.

Oftentimes, they can't really define what it is that happened to them, right?” Erazo said.

“I’ve had some who the minute they walk through the door know they want to make a report and just need help making the phone call,” she said. “And for others, it’s like, ‘I’ve got to get my feet underneath me again.

SAAVI assists anyone who’s encountered “interpersonal violence,” including stalking, hazing or dating and domestic violence. The office also has resources to help the neglected “secondary survivors,” like parents, spouses and roommates.

The majority of students who use SAAVI services are women, said Erazo.

“But we’ve seen an increase in the number of males coming in to seek services,” she said, noting that the staff includes a male advocate.

Recent numbers indicate an expanding client list. During fall semester of 2017, 31 students sought services. That increased to 59 in fall 2018 and, most recently, 68 new students in spring semester 2019.

Erazo said SAAVI works with students (and staff or faculty) for as long as needed — whether it’s therapy, direction, or basic support services like making sure the trauma victim gets out of bed and makes it to class. All contacts, exchanges and actions are strictly confidential.

The college environment adds some unique angles, particularly on a smaller campus like USU. The perpetrator may be a fellow student, and “the likelihood of you running into them in the Hub or TSC, or even in class, is fairly high,” said Erazo.

For someone focused on the demands of college schoolwork, an incident of violence becomes a strobe light in the periphery.

“And so they're fighting to hang on to this piece.”