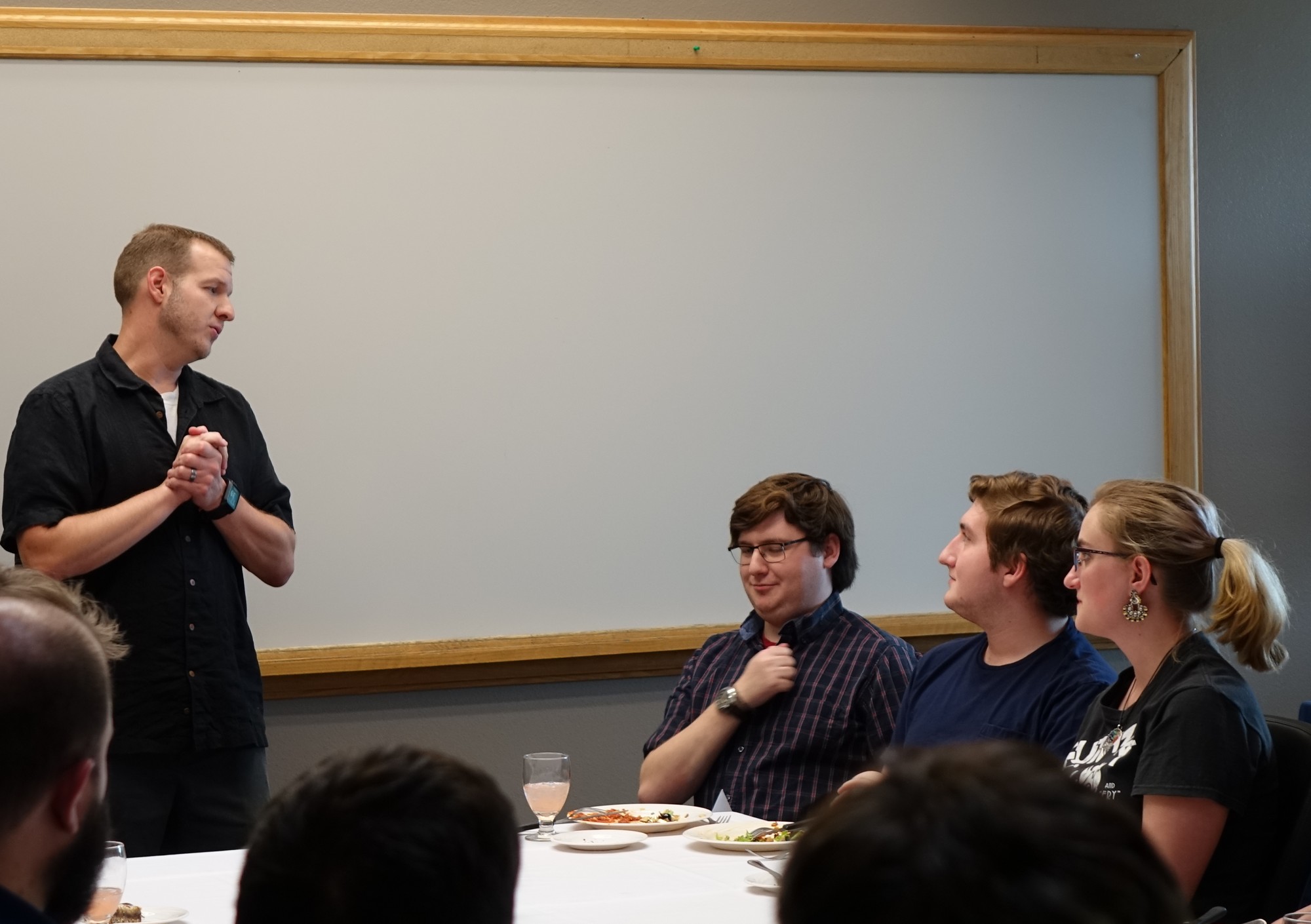 Chuck Oughton, who has completed a two-year position as a post-doctoral fellow in Classics, recognizes the students who assisted him during the USU Summer Intensive Program in Greek. From left, Jacob Hayden, Alec Smitten and Jessi Mellinthin, who attended a graduation luncheon following the seven-week course.

Classics professor and student of history Mark Damen should probably know better, but he is willing to place money on this bet.

Ancient Greek, he states, “is one of the hardest languages to learn.”

Not only has it been a couple of millennia since ancient Greek has been spoken daily, but it’s ultra-complex in its syntax and grammar. According to Damen, a professor of Classics, “learning ancient Greek takes real commitment.”

For that same number of centuries, scholars seeking to master the language of Homer, Greek tragedy and the Bible have had to resort to memorization. Such efforts, says Damen, get pretty intense when students are confronted with a “gigantic chart” of, well, tenses.

That’s why he is delighted with the successful conclusion in late July of the USU Summer Intensive Program in Greek. The seven-week immersive plunge into ancient Greek  introduced to Utah an entirely new and different path to learning Greek.

According to Damen, youngsters in ancient Greece did not sit around on rock benches  memorizing “is”, “was” “were” or “will.” They grew up learning instinctively that, for instance, “will” indicates something in the future, he said.

That innate ability to absorb meaning is the crux of a new form of ancient Greek instruction that has traditionalists like Damen shaking their heads.

Called “Lexis,” the Greek word for reading, the intensive learning system was introduced at the University of Texas at Austin in the 1970s by linguist and classicist Gareth Morgan.

Damen marvels as the effectiveness of Lexis, which crunches what a student normally learns in one academic year into a tenth of the time. A student who completes the summer course is basically propelled into upper-division Greek study, skipping an entire year.

Although the method has been internationally successful, it’s rarely been taught outside of intensive summer courses on the Austin campus. When its creator died in the mid-1990s, the linguistics system went fallow for a while, said Damen.

There are several reasons Lexis has not spread in popularity. Ancient Greek is a “monstrosity” to learn digitally, said Damen, because it doesn’t use the alphabet we do. But, most importantly, Morgan, the system’s creator, never published his textbook, instead relying for decades on his handwritten hand-outs and a small group of graduate students trained to teach Greek his way.

Fortuitously for USU, one of those grad students just completed a two-year post-doctoral fellowship in the Classics program. Indeed, Chuck Oughton is the co-author of a new textbook, Lexis: Reading Ancient Greek, based on Morgan’s method.

Oughton recently accepted a tenure-track position in Classics at Brigham Young University in Provo — a distance close enough that Damen hopes the summer class will continue in future years, possibly as a state-wide endeavor.

The Lexis system is so different from traditional forms of teaching ancient Greek that Damen frowns and shakes his head when asked if he could teach it. “It works better to get younger people who are simply more flexible in their thinking,” he said.

Like most classicists, Damen learned ancient Greek by “memorizing hundreds of paradigms,” he said. Lexis instead uses the “markers” that children instinctively learn as they grow older. Then, said Damen, “students learn the irregularities as they run into them.”

Traditionally, ancient Greek is a two-year endeavor. By the end of the first year (two semesters), the typical student has mastered grammar and started reading basic ancient texts. In contrast, by day 11 Lexis has students reading the words of Herodotus, the “father of history,” in their original form.

This 2018 summer seminar graduated ten students, said Damen. Among them were a couple of philosophy majors who wanted access to Plato, Aristotle and other great philosophers. Others were Religious Studies majors who were interested in reading the New Testament in Greek. And then, he adds, “we had some people do it because they’re just nerds.”

The Greek language has so evolved over the centuries, just as English has, that its ancient form would be unrecognizable to modern Greeks. Socrates, a 5th century BC resident of Athens, could not read a 21st-century newspaper any more than a modern newspaper reader could slog through Old English.

Worldwide, programs in ancient Greek have fallen victim to budget cuts and interest, said Damen. That’s why he excitedly describes the summer camp as a “wonderful thing.”

“We’re building something that ties us to these essential elements of our civilization. The Bible? Greek tragedy? Homer? These are huge,” he said. “These are foundational structures of our civilization — and now students can have direct contact with them in their original context and language and expression.”