Tom Worthen: His Achievements are Undebatable 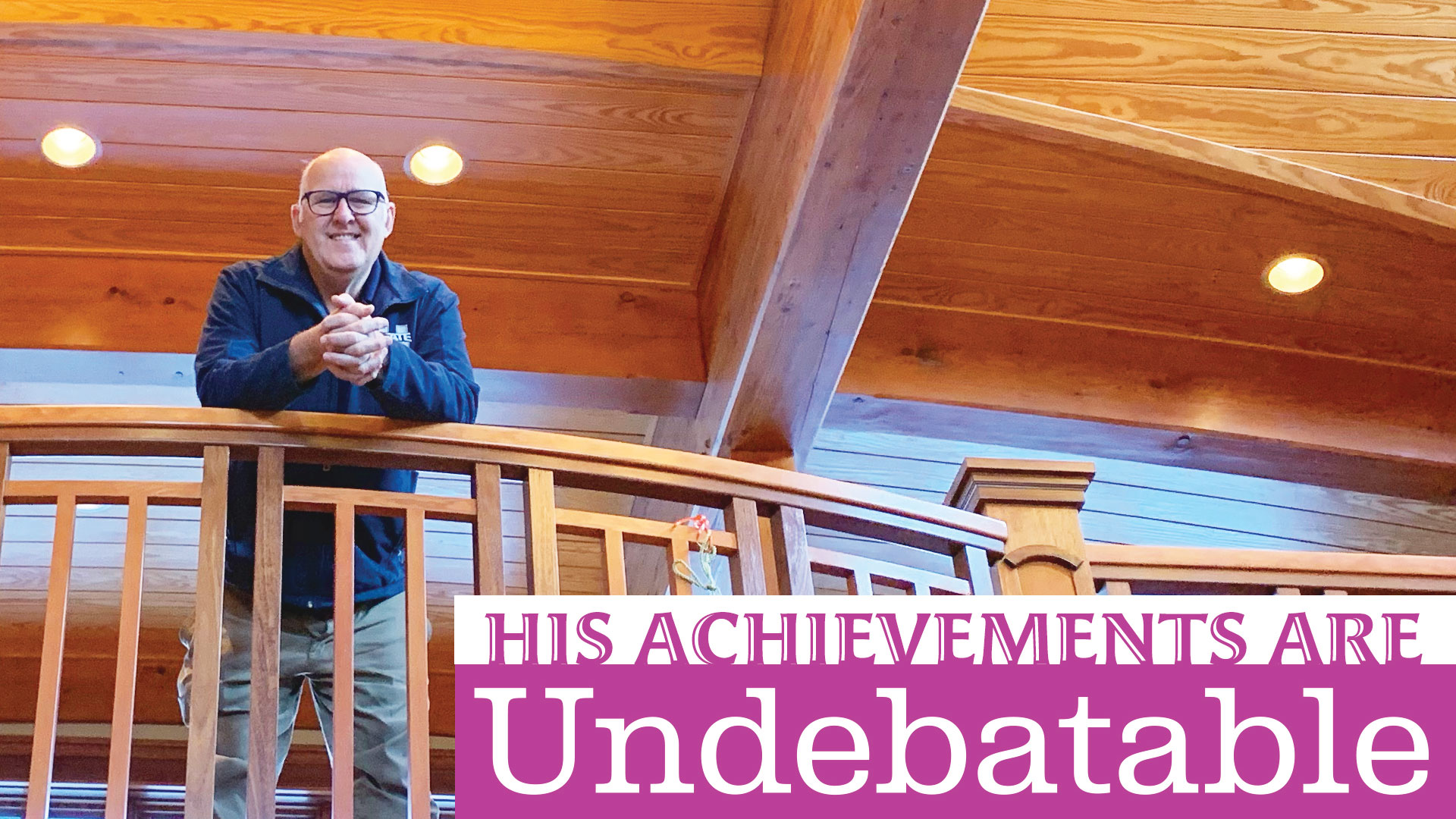 Yeah, showmanship is important. So is memorization, logic, clarity, argumentation. The capacity to stare down fear.

But the key precondition for joining this team is: “Hey, we’re splitting some Subway sandwiches and sleeping on the floor. Are you in?”

Everything else, says retiring coach Tom Worthen, can simply be learned.

Utah State University’s Speech and Debate Team is — um, looking for the most descriptive word here — scrappy. But scrappy in the heroic sense, as in “bigger doesn’t necessarily mean braver.” This is a team defined more by what it can do than what it has.

What it doesn’t have is a lavish, or even middling, budget. What it does have is a tough-love coach who now, as he retires after some 40 years, has laid out a precedent and path for future debaters.

Worthen is handing the countdown timer to Chantelle Gossner, who last year at this time was a nationally ranked member of the team. She graduated in 2019.

“Coach Tom,” she says, “was always encouraging and always gentle enough that we kept wanting to come back. But at the same time he was a great teacher and gave great critiques and feedback.”

Worthen, she adds, “strikes the perfect balance of tough love.”

In these days following his retirement at the end of 2019, Worthen surveys the team’s many trophies that now cover half of the table in his Smithfield home. Each award is topped by a hefty bronze eagle. They represent more than 10 conference championships in the past 13 years. And the 2019 special: a national championship.

USU’s Speech and Debate Team competes in the Northwest Forensic Conference, which consists of over 30 colleges and universities from Alaska, Oregon, Idaho, Montana, Washington, Utah, and California. USU generally floats a team of between seven and 12 participants. Their rival teams, says Worthen, are usually more robust in both number and budget.

That’s been the theme Worthen has maintained in press releases and other news over the years. Worthen’s recent letter to prospective sponsors read, “We are proud of our underdog status,” particularly “when we beat up on larger, better-funded teams with budgets, paid staff and scholarships.”

That’s vintage Worthen, who is retiring to spend time with family and a small publishing company he runs with his wife, Gaylin. None of the debaters and speech-makers he’s coached over the years is coddled. Convenience-store food is high cuisine.

Also, no specialization or favoritism is allowed; all debaters and their speech counterparts must cross the aisle. “You have to do both,” Worthen states. “That's one of the criteria to be on the team, and that keeps our team small and compact.”

Another factor could be the team’s seven-passenger van. (Although the “bench” sometimes reaches as high as 10 or 12.)

A student who does speech but not debate, or vice versa, he said, “takes twice as much food and twice as much room on the bus over a person who does both.”

Worthen has ever been a Scrooge with dollars. But he’s a Mr. Rogers regarding praise and acceptance. “I’ve never turned anyone down,” he says. “If you have the will and desire, we’ll find a space for you.”

The evidence seems to supports this.

No debate about a legacy

Gossner recounts a “funny story about Coach Tom’s coaching legacy here at Utah State.” Worthen completed with the Speech and Debate team in his junior and senior years as a student at USU. Then the coach took a new job and quit. So, says Gossner, rather than see the team’s good works go to naught, Worthen sought permission to move into the role of coach himself.

“He ended up giving up his last year of collegiate eligibility to coach the team,” she said. “And with only a couple of breaks, he coached here for the next 40 some odd years.”

That’s the way Worthen, too, remembers the story.

Worthen hails from southern Idaho. “Our family joke,” he says now, “was we moved from one damn job to another — because my dad worked on dams” as an engineer with the U.S. Bureau of Reclamation.

Ironically, as Worthen neared his high school graduation in St. Anthony, Idaho, the dam literally broke. In 1976, the Teton Dam, about 15 miles away, collapsed, resulting in massive and historic flooding that killed 11 people and caused billions of dollars in damage.

Worthen came to USU, eventually graduating in 1982 with a Theater major and a Communication Studies minor. The eventual news of the coach’s departure was a life-changing event for the college student — he just didn’t know how much it would affect his life.

After commencement, Worthen looked around. His theater buddies were off pursuing acting careers, but Worthen instead went for his master’s degree — in education. His appeasement: “I get to perform in front of a classroom every day. I have my content and my script, and I perform and interact with the students. It’s been a joy for me.”

After teaching gigs around the country, Worthen headed back to Logan to run his small but growing publishing house, Creative Communications. A true Aggie, Worthen couldn't help but go back knocking. To get his foot in the door, he says, he coached debate, essentially for nothing. He did eventually join USU as a faculty member in Communication Studies, teaching such classes as argumentation and interpersonal communication.

A few years later, Professor John Seiter, then department head, asked Worthen if he’d like to start a new speech and debate program. But the offer came with some bad news: “We can't pay you,” Worthen remembers Seiter saying, “because we have no money for a budget.”

Worthen didn’t wait a heartbeat before responding with an enthusiastic “Yes!”

That year, with unpracticed competitors and little prep time, he took his fledging team to a tournament. With no small amount of satisfaction, he adds, “every one of our students broke into the (top-rank) elimination rounds.”

Worthen is giving up coaching as of late 2019, but he’ll likely continue teaching as an adjunct professor for another year or so. He’ll also be busy with Creative Communication, which opened in 1994. Creative Communication specializes in writing contests among elementary and secondary students nationwide. According to its web site, “Students get published, win prizes, and teachers earn school supplies.”

The company’s most famous contest alumnus is singer and songwriter Taylor Swift, who as a fifth grader in Reading, Penn., won the Creative Communication prize for her poem titled, “Monster in My Closet.”

Debate, or speech: What is it?

Members of the speech and debate team are extraordinarily loyal, are willing to put in the hours (practice at 8 p.m. every Wednesday?), are friends with all intra-team rivals, and are resilient to torture.

Maybe it’s the fascination with a very personal competition that brings students in. Some, like one engineering student, said Worthen, wanted to overcome his greatest fear and weakness. Team members come from across campus seeking a universe of careers — all requiring skills not necessarily found in books.

Worthen offers one example: “The doctors that have the most malpractice are the ones who are poor communicators,” he said.

Gossner, however, give us what’s likely the strongest reason for debate’s draw: “It gets your blood pumping,” she said. “It’s s sort of akin to a runner's high.”

And along with that adrenalin comes “a very special energy,” she said. “What we do is scary, and it’s difficult. But it also brings a certain kind of warmth and life that I haven’t found anywhere else.”

That feeling is what has also kept Worthen enthralled for years with speech and debate. Or, is it debate and speech?

Even those among us who were too terrified to join the high school debate squad understand that speech and debate are, at some level, different animals. But as Gossner and her players will tell you, they’re completely different species. On different planets.

Speech, for example, offers a cupboard of yummy choices. There’s impromptu, a cogent 5-minute speech by a team member who’s been handed three quotations and a prep time of 120 seconds. Its bigger sibling, extemporaneous, takes on current affairs and international policy, for instance, requiring a 30-minute speech based on 7 minutes of preparation.

Some speech categories verge on the theatrical — scripted performances of poetry, prose or drama refined and polished over the eight-month season, because adds Worthen, “We’re pretty picky.” In the public speaking category, there are informative speeches, persuasive speeches, after-dinner speeches.

And then there is debate.

Debate is a formalized and sometimes fierce back-and-forth in which two competitors are assigned to the pro or con side of an issue. This intense match with the small amount of prep time turn ordinary students into experts within minutes, said Gossner.

“You’re quoting policy, citing sources, quoting experts to try to persuade the judge that that topic is either true or shouldn't be done,” said Worthen. And that half hour or so of preparation — a whirlwind of Goggle, digging for statistics, laying out arguments, predicting cross examination questions — is “like a war room,” said Worthen. “It’s fun.”

Debate is the most prestigious of the two, but also much more fraught. That’s because there is a winner, and there is a loser, at the expense of much emotion and stress.

Even a judge’s notes that “it was a really close round” are too little too late, said Worthen, “it’s tough. But you have to go on.”

And go on they do. On to another leg of a three-day tournament, 8 in the morning until 9 at night. “It may be tiring emotionally and physically,” says Worthen. “But it's rewarding.”