2019 Digital Trends of the Year 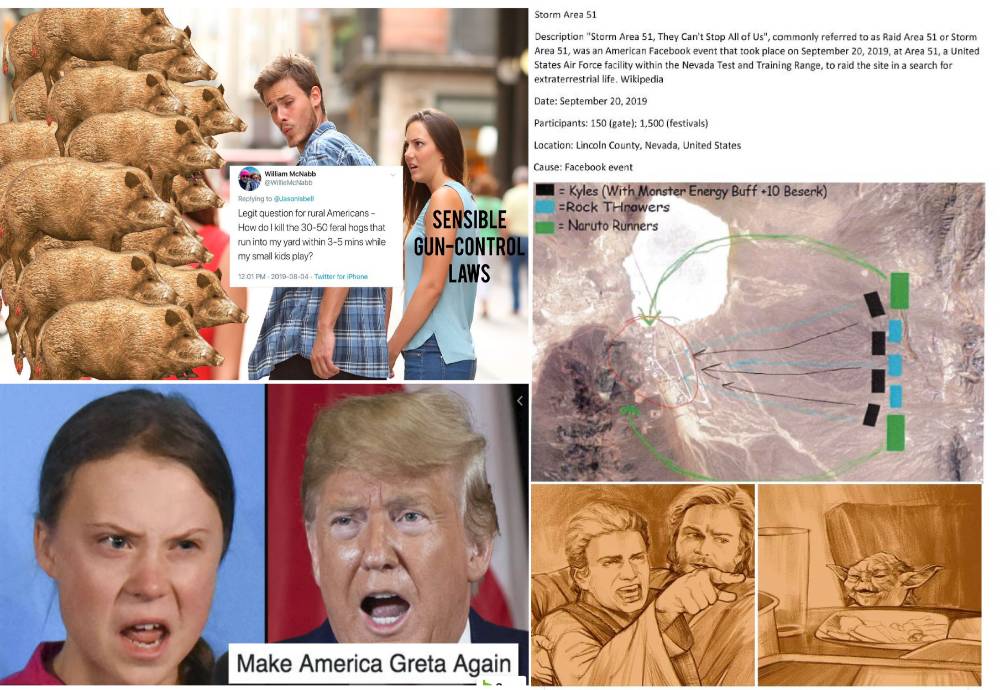 By: Alison Berg, Student Reporter at The Utah Statesman

Two Utah State University folklorists have announced the most influential digital trends of 2019 -- “Greta Thunberg vs. President Trump” in the social justice category and “Storm Area 51” in the serious fun category.

After a year of internet jokes, silly trends and serious social movements rooted in social media hashtags, a group of USU folklorists choose a series of “memes” they felt were influential for the year, write ballots explaining the meme’s significance and send the ballots off to be judged by folklore and internet scholars around the country.

Lynne McNeil, USU English professor and co-chair of the project, said the project is often ahead of social trends before they completely blow up.

Notably, the team chose “Greata Thunberg vs. President Trump” before Thunberg was named TIME magazine’s “person of the year.” Similarly, in 2014, the group chose “#BlackLivesMatter” before the hashtag became as much of a social movement as it is today.

While several media outlets and scholars conduct “meme of the year” contests, the two women heading the project said theirs is different in that it has nothing to do with numbers and everything to do with social sphere.

“One thing that differentiates us is grass roots,” said Jeannie Thomas, English department head and one of the two co-chairs of the project. “We’re really interested from the ground up, from the everyday person sort of thing, what do those people latch onto, as opposed to a corporation or an influencer that’s really trying to get this out there.”

Since the contest began in 2014, the project has highlighted popular and easily recognizable memes, but McNeil said it’s entirely possible judges could choose a meme only recognizable to niche corners of the internet.

“We may end up highlighting a meme that was limited to a small group of people,” she said. “It may be small, but for the people who share it, it’s a big deal.”

Both folklorists said their field of study is unique in that it focuses on studying topics other fields have traditionally considered trivial.

“The academic study of folklore is a little bit of an exercise in convincing people that the things they thought were unimportant are actually important,” McNeil said. “On the internet, it’s easy to dismiss memes and viral challenges...but just like with any folk culture, if there is some form of content or idea that absolutely everybody knows but it’s not something they’re getting paid to know or getting tested on or have to know for their jobs, that’s significant.”

McNeil added digital trends are a form of “valuing the grassroots voice of everyday people.”

Both also agreed internet memes are often a way for people to talk about serious issues in a more informal way.

“Sometimes we really need that laugh, or we need to think about something where the stakes aren’t so high, and the internet lets us do that,” Thomas said.

Other contenders for the 2019 winning title included “30 to 50 feral hogs,” “feeling cute, might delete later,” “Epstein didn’t kill himself” and the “table cat.”

While the beloved Baby Yoda didn’t make the 2019 cut because it came along late in the year, McNeil and Thomas are confident it will be on the 2020 ballot.