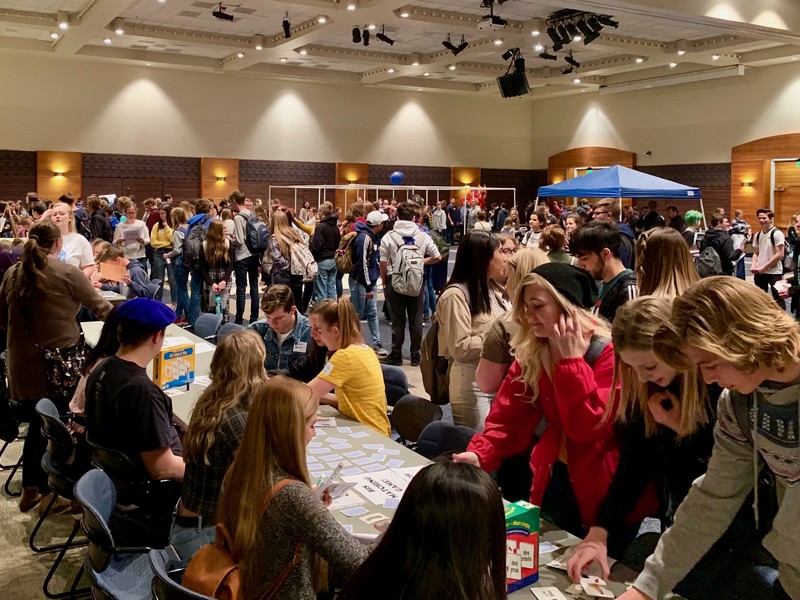 Hundreds of language students from Cache Valley high schools gathered at USU March 18 for the Cache Valley World Languages Fair 2019. In between intervals of fun and play, they interacted with ‘experts’ -- USU language faculty and students, as well as high school teachers and community members.

They came for the adventure. They stayed for the conversation.

And the macaroons. And the Chinese dragon. And the board games.

The halls of the Taggart Student Center were ringing Monday with the buzz of nearly 1,000 high school students — all of them foreign language students in the Cache Valley.

Who knew, said one observer, the two school districts based in Logan were teaching a thousand-plus language students?

And, the teenagers were definitely speaking, all at the same time, as they practiced skits, triumphed at board games and spoke with “experts” — Utah State University faculty and language students, as well as some community members.

The March 18 event was the first time USU has played host to the Cache Valley World Languages Fair, which was launched in 2018  on the district level. 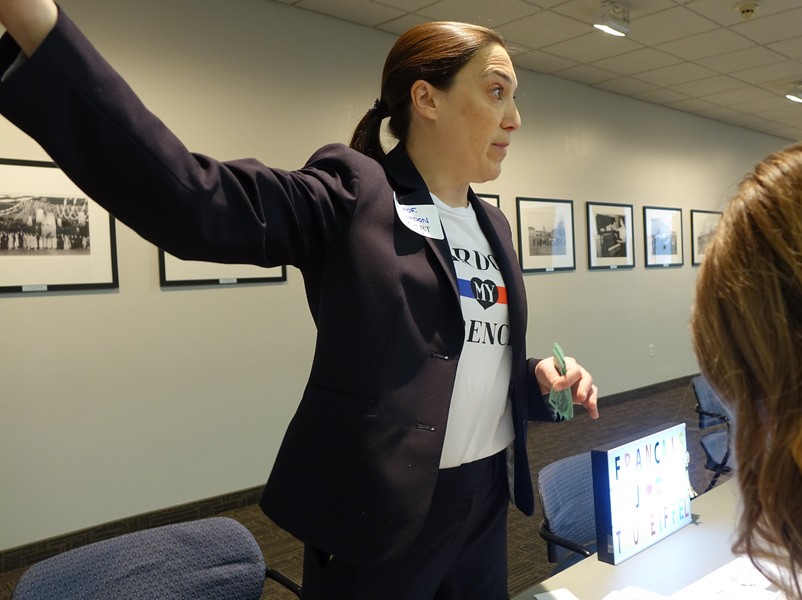 Sarah Gordon, an associate professor of French and an ‘expert’ to hundreds of high school students attending the Cache Valley World Languages Fair 2019, directs newcomers during the March 18 event.

Bringing in USU, said co-organizer Joshua Thoms, gives university language students the opportunity to be teachers themselves. Thoms is an associate professor of Spanish and Applied Linguistics in the Department of Philosophy, Languages and Communication Studies. “This event brings learners together to engage in different activities,” he said.

The languages heard at Monday’s events were French, Chinese, German and, carrying the majority of speakers, Spanish.

Each student underwent that scariest aspect of acquiring a language: speaking with someone, as Thoms explains, “who knows the language better than you do

He adds, “We want students to move beyond that intimidation of speaking to an expert who is not one’s teacher.”

In addition, USU adds a spectrum of language nuances. “Being a teacher myself,” he said, “it’s nice to expose students to different accents in each language and different regional dialects.”

Thoms was delighted with the hundreds of high schoolers filling the TSC ballroom. He’s looking forward to next year, with the arrival in high school of the first cohort of the Utah Dual Language Immersion program.

Started in 2008, the program immerses first-graders in a half day of regular subjects taught in a foreign language, with the same group advancing year to year. Cache Valley has five Dual Immersion programs, one each in Chinese, French, Spanish, German and Portuguese. Each class has about 60 students, he said.

Such celebrations of languages as the Language Fair are important, said Thoms, especially since he worries that the study of languages is becoming less valued is our society. “There are some survey studies going on since 1950 that show we’re seeing a trend for the first time where numbers are going down nationally in terms of foreign language majors,” he said. “And for the first time that’s touching Spanish in particular.”