That most effective of weapons, shaming, is focus of upcoming Ethics Slam 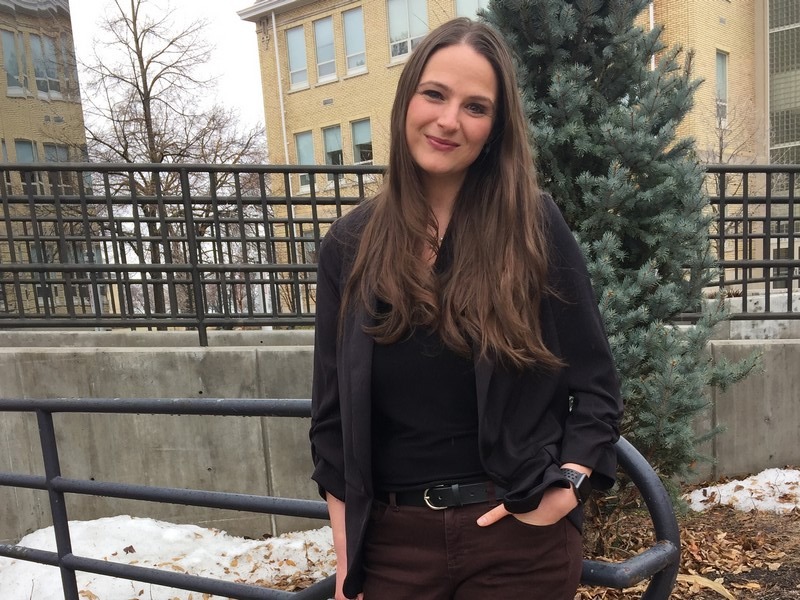 Rachel Robinson-Greene, a post-doctoral fellow in Philosophy, teaches courses on ethics. She’s also the force behind the first-ever community-wide Ethics Slam set for April 3 in Logan.

Whoever said sticks and stones may break my bones got that right.

Even as the smallest kids on the playground, we understood that words could be destructive and names everlasting.

These days, words seem to be the cheapest artillery in political and cultural skirmishes. And, while there have always been angry words, adds USU philosopher Rachel Robinson-Greene, now they’re louder than ever.

Nobody doubts the effectiveness of words as weapons; but Robinson-Greene is hoping students and community members can go further to ask: “Yeah, but are such actions ethical?”

“The Ethics of Shaming” will be the ball-in-the-air at the first-ever Ethics Slam in Logan, set for 6 p.m. Wednesday, April 3, at the Crepery restaurant, 25 W. Center St.

The gathering is free and open to the public. Robinson-Greene, the organizer and a post-doctoral fellow in Philosophy, says the goal is to encourage amicable and non-shaming conversation.

Indeed, “slam” is not an instruction. Robinson-Greene said the ethics slam actually takes inspiration from the poetry slam, where the mic is passed, thoughts are shared and efforts are appreciated.

“One of the reasons we do ethics slams is to get the community to have a conversation that they otherwise aren’t having — or they’re having it online in really ugly ways,” she said.

This coffee-and-crepe informality has worked well for some earlier Ethic Slams Robinson-Greene organized in Ogden with her husband, Richard Greene, a professor of philosophy at Weber State University.

Topics ranged from public protests like taking a knee, for instance, to the ethical dilemmas posed by technology. At one forum discussing guns, she said, “We had people who were very pro-gun there and people who were very anti-gun. They were at least willing to behave kindly and respectively.”

Granted, Robinson-Greene is a philosophy wonk, but she says philosophy is very useful for workaday people in breaking down and understanding complex issues.

First off, we should agree on the definition of shaming. “One of the reasons conversations may get ugly to begin with is that we’re all working from different assumptions about definitions,” she said.

And, once we’re clear on the concepts, she added, “we can sort out and identify different instances of shaming and what they have in common or don’t have in common.”

Finally, she said, philosophical tools “allow us to really start looking at what are the best arguments and what kind of behaviors we should perform based on those arguments.”

This idea of practicality was among the reasons Robinson-Greene shifted her research focus to practical ethics after completing a Ph.D. at the University of Massachusetts Amherst in meta-ethics, which studies complex, broad-scale ideas.

“Philosophy should be about how you live your life,” she said. So she shifted her focus to how ethics — a branch of philosophy that seeks to identify what is good and bad, or right and wrong — can be applied in everyday life.

Theory may be “great,” she says. “But I’m most interested in how theory can impact action. Ultimately, ethics is about action.”

Take shaming for instance. In theory, says Robinson-Greene, shaming is a moral emotion could have some benefits. “It may be important that people feel shame so they can modify their actions,” she said.

In reality, though, “shaming can also be used as a political tool to silence voices,” she says.

For some people, shaming others can carry subtle rewards. “It can be a way of increasing the level of self-esteem of the person who’s pointing the finger,” she said. And, in our current political climate, public shaming is being used as a tribal dog whistle. “Shaming is also used to identify who’s a member of what group, as in, ‘I’m in this camp,’” she said.

“Social media makes it easy to carve out tribes, to identify with others who are like-minded, and to put yourself in a bubble where you don’t have to care about other people,” she said.

Robinson-Greene is practiced at unraveling a philosophical issue and providing helpful insights. For instance, she and her husband have collaborated on a number of books in the Popular Culture and Philosophy series published by Open Court Publishing. The titles include The Handmaid’s Tale and Philosophy: A Womb of One’s Own and Twin Peaks and Philosophy: That’s Damn Fine Philosophy!

For now, though, she’s focused on the philosophy of Cache Valley residents.

“We want to foster a community that’s listening to one another and responding to what they’ve heard,” she said.

“I think — and maybe this is just optimism — that people want that back.”

The Ethics Slam is sponsored by the Utah State Philosophy Club, USU’s Society for Women in Philosophy, and the Richard Richards Institutes for Ethics at Weber State University.