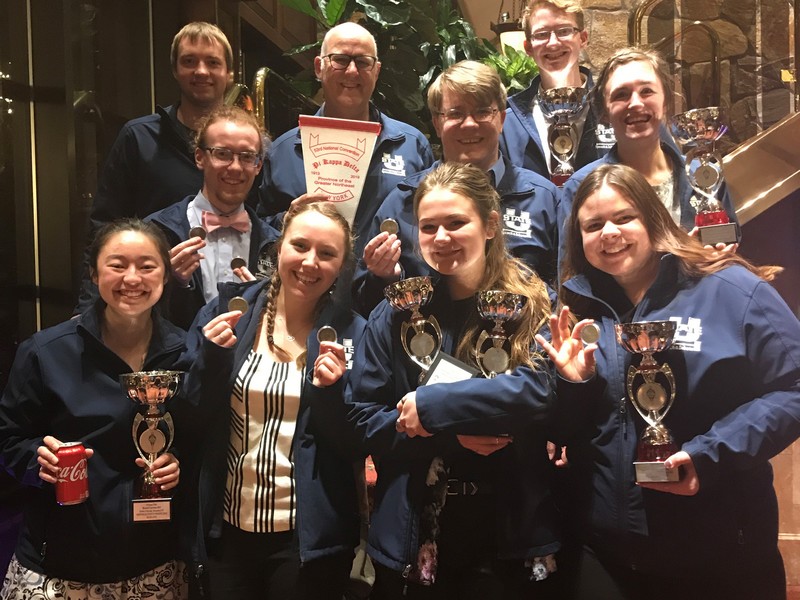 It’s March Madness for USU Speech and Debate, which scaled the brackets to earn its ranking as the nation’s best at the country’s largest comprehensive speech and debate tournament, according to Coach Tom Worthen.

The nine-member team  finished in first place at the Pi Kappa Delta National Tournament, sponsored by the International Public Debate Association and hosted at Hofstra University in Long Island, N.Y.  The debate team is housed in the Department of Languages, Philosophy and Communication Studies within the College of Humanities and Social Sciences.

Two USU debaters, junior Sam Hendricks and senior Chantelle Gossner, earned first and second place at the tournament, closing out the entire open division of IPDA debate, said Worthen. Open Division is the top division of debate with the most experienced debaters, he said. All told, USU’s competition included 77 other universities and colleges.

"This is the March Madness for speech and debate,” said Worthen. “As we worked our way through the brackets, we ended up taking first in the nation — again.”

The USU team entered this competition as the defending national champion following its success at the 2018 national tournament at Boise  State University. That competition ended with six USU debaters receiving top prizes. Worthen added that at the close of six debate roundsr, USU held the No. 1 and No. 2 seeds for the elimination rounds.

Although USU was the top seed, the team “as a whole is more like the Cinderella team of the collegiate debate world,” Worthen said. “We compete against universities with large  budgets, paid coaching staffs and students on scholarships, and yet, with none of these things, we consistently come out as tournament champions.”

Worthen launched the university’s debate team in 1981 and coached it for a year until lack of funding closed it. In 2003, he restarted his efforts to build a team, which has been successful since then.

Other individual students placing at the tournament were:

Zoe Hall: placing in the top 20 percent in Broadcast Journalism and Impromptu Speaking.

Earlier this year, USU took first in the Northwest Forensic Conference in Debate and second in Speech events.  The conference consists of over 30 colleges and universities from Alaska, Oregon, Idaho, Montana, Washington, Utah and California. Worthen noted that, in total, the team has won over 10 conference championships in the last 13 years.