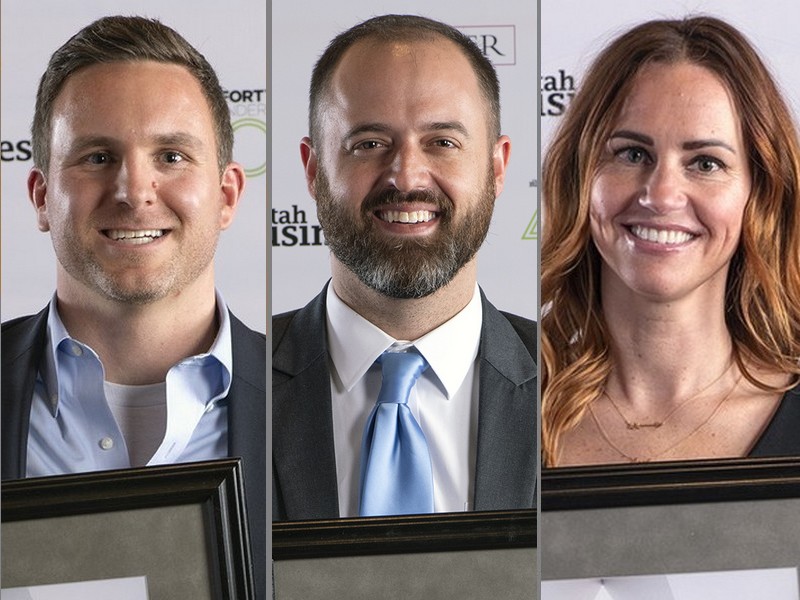 Three alumni of the College of Humanities and Social Sciences are among the “Forty Under 40” business leaders honored by Utah Business magazine. They are Tyler Buswell, Ben Kolendar and Jessie Lynn Richards.

Three alumni of the College of Humanities and Social Sciences are among Utah Business magazine’s 2019 “Forty Under 40” business leaders.

Tyler Buswell (American Studies/Political Science, 2005), Benjamin Kolendar (Philosophy, 2010), and Jessie Lynn Richards (English/Technical Writing, 2004) were among the honorees the magazine described as “innovating the future of the business landscape in Utah.” Richards is also a member of the CHaSS Dean’s Advancement Board.

Buswell is a shareholder and attorney specializing in commercial real estate with Kirton McConkie in Salt lake City. According to the magazine, Buswell’s “knowledge and understanding of key legal issues is demonstrated not just in the complicated transactions he works on, but also in being a frequently requested presenter on legal issues.”

His interest in pro bono legal services for people who can’t afford attorney fees was transformed to  Serving our Seniors, a project he founded that provides certain free legal services to indigent senior citizens across the State of Utah.

Kolendar represents Business Development & Economic Development, a department he founded and now directs for Salt Lake City. The magazine notes that the department has seen “tremendous” growth since it was created in 2016 by Mayor Jackie Biskupski, retaining over 9,000 jobs and nearly a billion dollars in capital investment. “He played a critical role in updating Utah’s Foreign Trade Zone process, as well as bringing the 68th United Nations Department of Public Information NGO Conference to Salt Lake City in 2019,” according to the nomination.

Kolendar will be a guest at the next CHaSS Alumni Lunch Series, which features alumni conversing with students, offering guidance  and career hacks. The event (and free lunch) will be at 11:30 a.m. Thursday, April 4, in Old Main’s Champ Hall Conference Room. (Seating is limited; RSVP through Handshake.)

Richards directs of the non-profit foundation Fight Against Domestic Violence, which focuses on increasing education, awareness and resources for victims, survivors and the community. She also teaches business and professional communication and writing at the University of Utah and Westminster College.

Richards is the founder of the new Jessie and Jared Richards Scholarship Endowment, which provides a full-tuition scholarship for four years to low-income students interested in studying issues of family violence.

The Utah Business article can be found at https://www.utahbusiness.com/2019-40-under-40-honorees/