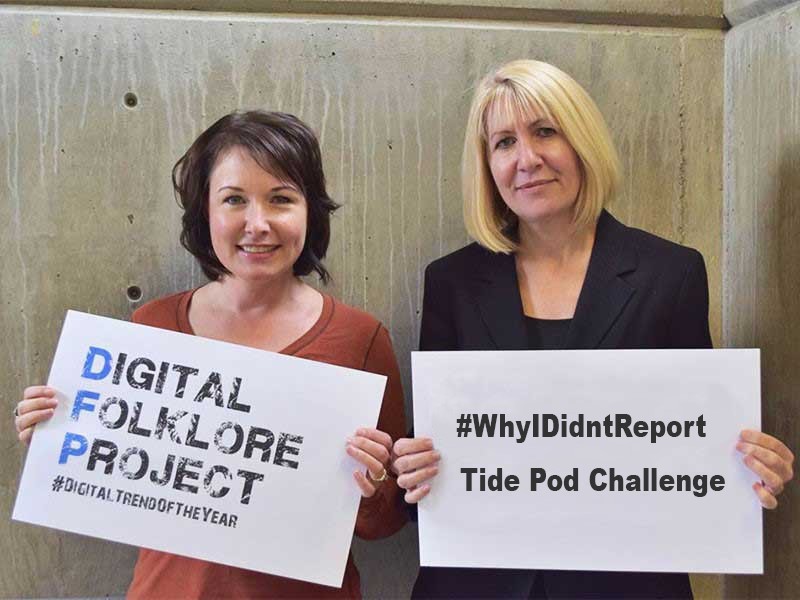 Lynne McNeill and Jeannie Thomas, co-directors of the Digital Folklore Project, announce the 2018 Digital  Trends of the Year, which recognize the most influential and widespread memes of the year.

The internet is our modern-day sandbox for shaping folklore. And this year, the millions of neighborhood kids sifting through the World Wide Web dug into some serious sand.

That’s according to directors of Utah State University’s Digital Folklore Project in an announcement of the 2018 Digital Trends of the Year.

The most far-reaching and influential meme of 2018 was #WhyIDidntReport, a Twitter hashtag that continues to give survivors a platform to speak to the difficult issue of sexual assault, said Jeannie Thomas, who co-directs the DFP with Lynne McNeill, an assistant professor of English.

In the lighter-hearted but no less significant category of Serious Fun, the Tide Pod Challenge bubbled to the top, said Thomas, who also serves as chair of the English Department.

The annual survey, conducted since 2014, is drafted by students in USU’s Folklore Program and judged by a nationwide panel of professional folklorists who assess such factors as cultural significance, persistence over time and whether the trend fits the grassroots, common-people usage that identifies it as folklore, said Thomas.

A couple select memes from the past year

Folklorists are great fans of the internet, where they can track the evolution of folklore almost in “real time,” said McNeill. She’s the co-author of the 2018 book on perhaps the internet’s greatest folkloric phenomenon: Slender Man is Coming: Creepypasta and Contemporary Legends on the Internet (Utah State University Press).

Today’s online community is much like yesterday’s backyard-fence conversations, said Thomas, where pre-digital-age folks once shared and spun gossip and wisdom. In fact, the internet “functions like a ‘digital campfire’ that draws people together to share their stories and lore,” she said.

#WhyIDidntReport first trended in September during the hearings for Supreme Court nominee Brett Kavanaugh. Sparking the trend was Trump’s harsh Twitter assessment of Christine Blasey Ford, who came forward to accuse Kavanaugh of sexual assault many years earlier. “If the attack on Dr. Ford was as bad as she says,” he tweeted, “charges would have been immediately filed with local law enforcement …”

2018’s winning meme reflects 2017’s top digital trend, the Twitter hashtag #MeToo. The continuing conversation is “deepening in an interesting way and becoming more nuanced,” said Thomas. Like #MeToo, she adds, #WhyIDidntReport is a grass-roots reaction to a national issue. It’s “clearly folkloric because it’s made up of personal experiences,” she said.

Thomas acknowledges that Twitter may seem to an unconventional venue for such a discussion, “but that seems to be happening with this one,” she said. These ordinary people behind the tweets “are actually educating people about an aspect of sexual assault that’s not well understood. It’s a teaching moment.”

McNeill agrees. “The distilled micro-narratives that people share over Twitter – and aggregate by using hashtags – are some of the most powerful individual expressions we encounter,” she said.

On the goofier side, the gimmick of an edible challenge, albeit it of laundry soap, first appeared on the satirical news site, The Onion, in 2015. What was first an ironic take on the squishy, colorful appearance of a Tide pod — a “forbidden fruit” in other words — evolved in January 2018 into something more aggressive, according to the ballot written by USU student folklorists. The expanding internet-based challenge called for people to bite into Tide pods and post their inevitable #fails on such social media platforms as YouTube.

The trend presented older generations with a handy dartboard for mocking teenagers for months.

Runners-up in the Social Justice category were:

No. 2: Black Hogwarts, a look at the Harry Potter world through the lens of black culture. Tweeters assigned the movies’ roles to a variety of black celebrities. Former President Obama as the Minister of Magic? Or Morgan Freeman as Dumbledore?

No. 3: Presidential alert hashtag, a take-off on the first-ever tweet from the Federal Emergency Management Agency. The Oct. 3, 2018 tweet from President Trump read: “Presidential Alert of the National Wireless Emergency Alert system. No action is needed.” The millions of people who received the tweet were soon responding in folklore fashion.

No. 4: The Momo Challenge, featuring an eerie image of the bird-like “Momo” that in July, 2018, was linked to a WhatsApp phone number that would allegedly send disturbing photos and comments to those who contact it. The specific details vary by meme, but all are dominated by themes of suicide and self-harm.

No. 5: Parodies of the Nike ad featuring controversial former pro-football player Colin Kaepernick with the text, ‘’Believe in something. Even if it means sacrificing everything.”

As for the Serious Fun category, it’s grown from cat memes to something much more, said Thomas. Fun, she said, “is almost always meaningful.”

These memes allow us to chuckle, but at the same time dip into a message “that gets at something real or serious,” she said. “We started out just referring to them as ‘fun,’ but we soon came to see they were always more than just mindless fun.  They start a dialog, change behavior or raise an issue that people care about,” she said.

Runners-up in the Serious Fun category are:

No. 2: The Baby Shark children’s song, a form of the often overlooked category of children’s folklore that allows watchers to join with hand motions. It’s also an “incredible earworm,” notes Thomas.

No. 3: Marxist Gritty, the floppy, orange-furred mascot of the Philadelphia Flyers hockey team that became a darling of antifascists and left-wing types.

No. 4: Elon Musk mocking, which basically involves making fun of the inventor and “pretentious and craziness,” said Thomas.

No. 5: American Chopper, based on a specific scene from the TV reality show about custom motorcycles that portrays the father and son stars in a wild argument that ends with the father firing the son. Unlike many memes, this meme presents a multi-faceted argument.

Or you can visit https://www.facebook.com/digitalfolkloreproject