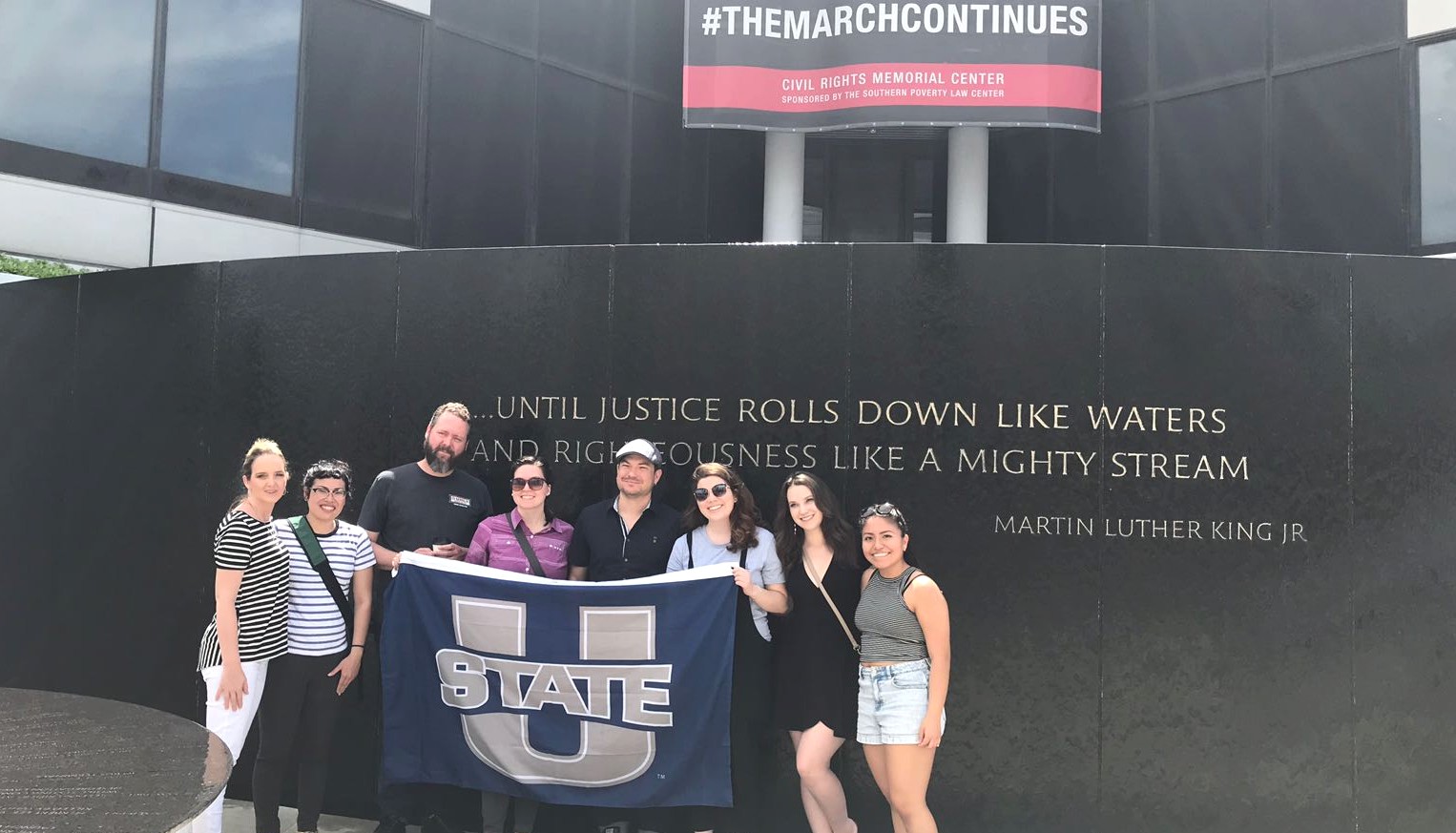 At exactly 6:01 p.m. on the evening of April 4, bells throughout Memphis, Tenn., began to chime.

The bells marked the time when, 50 years ago to the minute, Dr. Martin Luther King was gunned down as he walked along the balcony of the Lorraine Motel.

The five students who formed the Utah State University Civil Rights Pilgrimage gathered with hundreds of people in downtown Memphis at the Lorraine Motel to record, absorb and reflect the day-long MLK50 tribute.

They returned to USU with a sense of hope and enthusiasm to carry out the “positive actions” they learned, said Anna Petersen, a cultural anthropology major.

They also share with us the quiet, eerie moment of striking bells, which can be heard in a new original radio series from Utah Public Radio, “King’s Road: Where Do We Go from Here?” The broadcasts retell the insights and voices gathered by these students as they traveled throughout the American South as part of the Civil Rights Pilgrimage. The series features on-the-road interviews were conducted by the student team, who attended MLK50 as student journalists for UPR, complete with press credentials. 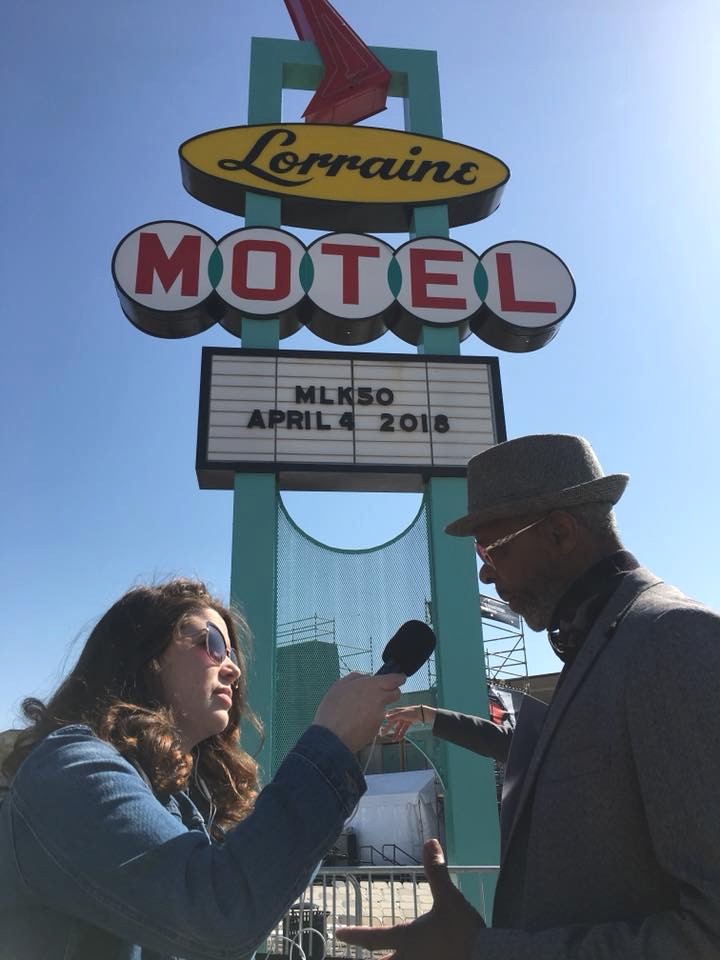 Brianna Johnson, a student journalist reporting for UPR, conducts an interview at the Lorraine Motel in Memphis, Tenn. She and other students, part of USU Civil Rights Pilgrimage, attended a tribute marking the 50th anniversary of Martin Luther King’s 1968 assassination. Their reporting  can now be heard on UPR (FM91.5)

In the days prior to the anniversary, the students explored King’s Road in Alabama and Georgia, stopping at sites visited by King in the months before his April 4, 1968, murder. The Lorraine Motel site itself now houses the National Civil Rights Museum.

“We call it a pilgrimage rather than a trip because it transforms our understanding of things in a way that you don’t get from reading a book,” he said. “We engage with the spaces and feel the energy of those spaces, both in history and now.”

The Civil Rights Movement of the 1950s and ‘60s remains in American consciousness largely in the form of a slogan: “Rosa Parks sat down, and MLK stood up.”

But journeys like this allow students to “delve deeper” into the fraught and complicated history of civil rights in America, said Gilmore. In 2015, he accompanied students to Selma, Ala., to take part in the 50th anniversary of “Bloody Sunday, so called because peaceful marchers were assaulted by state troopers. In 2013, he and students participated in the half-century mark of the Children’s March in Birmingham, Ala.

For this 2018 journey, “I think the important thing our students have honed in on is how many nameless voices there were — the foot soldiers of the Civil Rights Movement — who don’t get fame but who put in the work day after day,” said Gilmore. “So much just gets lost in history.”

In the years following King’s assassination, the Civil Rights Movement lost much of its steam, particularly as Americans turned their attention to such headlines as the Vietnam War. Gilmore is encouraged, however, that this 50-year mark comes at a time when civil rights is becoming a “rejuvenated conversation.”

The current conversation, he adds, is not necessarily centered in such movements as Black Lives Matter. “We’re now seeing a surge of civil rights activism for LGBT communities, women’s issues, disabilities. A number of different communities are seizing this national moment to voice their concerns and champion their causes,” he said.

Peterson, the anthropology student, plans to turn her focus on helping people with disabilities.

“I’m passionate about learning from this movement and seeing how people took action — positive action,” she says in a radio segment.

The pilgrimage is part of an Independent Studies course within the College of Humanities and Social Sciences. Class members met regularly in the weeks before the trip, studied historically important documents and reflected on how the events of 50 years ago affect civil rights in 2018.

The student journalists were, in addition to Peterson,  Azalia Bocanegra (global communication), Alean Hunt (political science), and Hannah Bundy and Brianne Johnson (both  communication studies). Other faculty traveling with the group were François Dengah, assistant professor of anthropology, and Karen Senaga, a postdoctoral teaching fellow of history.

The class also went over what Gilmore calls the “pilgrimage values,” designed to help the students better “engage in difficult conversations and subject matter in a productive manner.” Those values are: wonder, grace, appreciation, agency, responsibility, contribution and courage.

Despite what may have been a somber occasion, the day-long tribute in Memphis left students full of hope and anticipation — emotions that are reflected in the interviews in the UPR series, said Gilmore. “People had a sense of hope, a sense that things will improve, a sense of empowerment and ‘What can I do?’” The series’ weekly episodes will continue through April, with all episodes available to stream at UPR.org.

Although the celebration was in honor of one man and his remarkable leadership, many of the day’s messages encouraged listeners to take action where they stand.

“One of the themes was ‘What can you do in your own community to make things better?’” said Gilmore. “Don’t wait around for a singular leader. Be inspired by all of the leaders around you and get involved in  helping to improve your own community.” The pilgrimage members will host the “Lift Where You Stand” Movie Night on April 16. Airing will be the short film “The Children’s March,” an Academy Award-Winning documentary about the  1963 children’s march in Birmingham, Ala. The event begins at 7 p.m. in Eccles Science Center room 130. Free and open to the public.

To hear episodes of “King’s Road: Where Do We Go from Here?” visit http://upr.org/programs/kings-road-where-do-we-go-here

More on the USU Civil Rights Pilgrimage can be found on their Facebook page at https://www.facebook.com/usucivilrights/