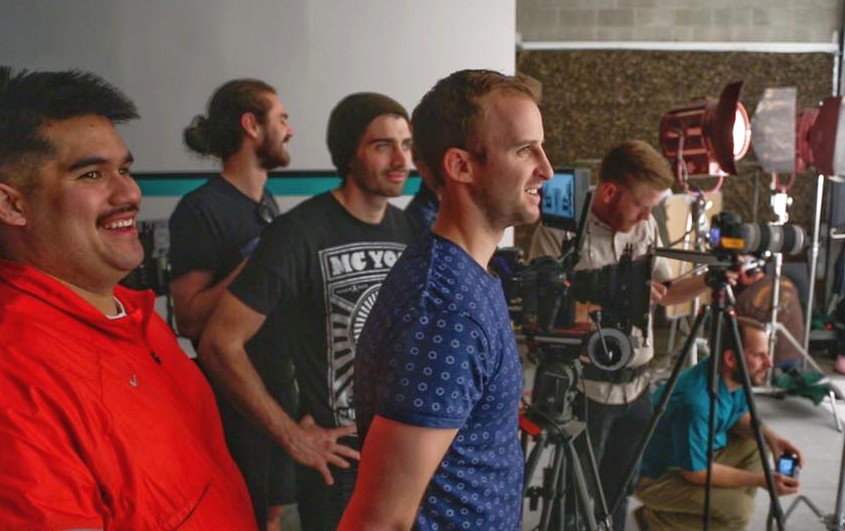 2011 Journalism and Communication graduate Travis Chambers, shown here in his Chamber.Media studio, has been named by Forbes magazine in its 30 Under 30 ranking.

If you’ve laughed at the viral video of Kobe Bryant and soccer star Lionel Messi competing in an epic battle of selfies, you were one of, oh, only 146 million people.

The creative genius behind that video is Travis Chambers, a 2011 graduate of Journalism and Communication in the College of Humanities and Social Sciences.

Chambers, who left 20th Century Fox where he oversaw social media to found his own video and advertising company, has been recognized as one of Forbes 30 Under 30, an annual list that highlights what the magazine calls “the impressive, the inspiring and the (genuinely) enviable.”

The awards, released in the magazine’s December issue, identify 30 “young stars” in 20 different industries. Chambers was included in the marketing and advertising category. Other industries range from law and policy to healthcare.

Forbes magazine cited  Chambers’ company, chamber.media, with reported revenue of $2 million in the last year, as well as the “super-viral” video ad for Turkish Airlines featuring Bryant and Mess, for which Chambers oversaw content strategy and distribution while at Crispin Porter + Bogus, an international advertising company.

In an interview from his home in American Fork, 29-year-old Chambers describes the recognition as “pretty cool.”

Chambers said he knew at an early age that he was headed for a career in advertising and by age 12 was carrying a video camera around making “funny home videos.” He was drawn to advertising rather than, say, independent film making, he said, because he liked its mix of creativity and business.

He grew up in Oregon and Washington, enrolling at USU at the urging of his parents, both Aggies. His father David Chambers now lives in Smithfield.

At the time, Chambers said, social media was beginning to be recognized as an advertising medium. As a student in JCOM’s public relations track, Chambers created his own “catered
program.”

“I decided I was going to take advantage of all the resources that were available to me,” he said. “I combined my education with internships and clubs and fraternity — trying to get all the experience I could.” Among those experiences was a year as a USU Ambassador.

He was in Los Angeles with 20th Century Fox, his disenchantment with the Hollywood culture growing, when his daughter was born. That changed pretty much everything, he says now. He took the “terrifying” leap of leaving a regular paycheck and founded his own company. He describes his decision in an essay,

Chamber.media now employees about 20 people and a constraint stream of contract writers and actors at its American Fork-based studio. He specializes in what he calls “scalable” videos. Scalable social videos, he says, are the next evolution in an industry that gave us virality and a generation of consumers who love to share videos. You may have seen other chamber.media videos, such as a gym floor of 50 exercisers frolicking on Nordic Track units or “brand awareness” ads like the “live birth of Tito.”

Chambers’ job title is Chief Media Hacker, which describes his multiple roles as writer, producer and what turns out to be the most important job: distributing the video on social media channels to reach as receptive an audience as possible.

“I do all of this in a way that’s focused on being able to sell as effectively as possible — and entertain and delight people,” he said. But that’s just the start of a process that rolls onto distributing the content on social media to reach targeted audiences. “We’re  trying to figure out what audiences to serve them to and diving into the data and all this quantitative side,” he said.

“The only way I could really sum the whole thing up is that I’m a media hacker — I’m not really just the creative director or ad buyer or producer.”