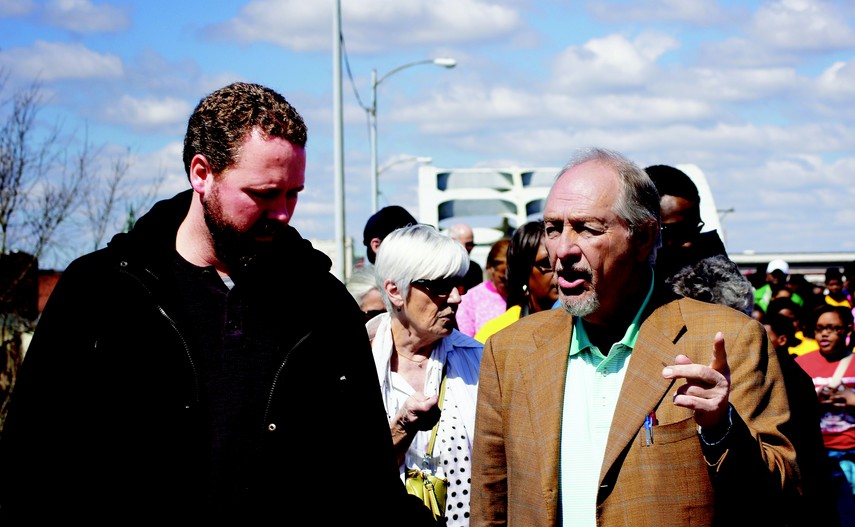 Jason Gilmore, a Communication Studies assistant professor and director of the USU Civil Rights Pilgrimage, walks with civil rights activist Bob Zellner during the group's 2015 journey to Selma, Ala., where student participated in the 50th anniversary of the "Bloody Sunday" Selma-to-Montgomery march. This year, Gilmore and students are working with UPR on an original series “Where Do We Go From Here?”

The original series, “King’s Road: Where Do We Go from Here?” is a partnership between UPR producers and Utah State University’s Civil Right Pilgrimage project,  said UPR’s Dani Hayes.

The five-part radio series that begins today will focus on King’s legacy and how the lessons from the 1950s and ‘60s civil rights movements can apply to modern-day issues. King was fatally shot in Memphis, Tenn., on April 4, 1968.

Jason Gilmore, an assistant professor of Communication Studies, has organized several student “pilgrimages” that seek to understand the “ongoing struggle” of the civil rights movement.

“We’re seeing a resurgence today in many regards,” he said, “not just with issues of civil rights for African Americans, but civil rights for a number of different groups from across gender lines, across ethnicity, for immigrants, for people labeled with disabilities.”

Gilmore and his team will be traveling to the American South April 4-7 to immerse themselves in the history of the civil rights movement from the past and observe how it has evolved today.
The history-focused excursion follows what’s known as King’s Road, a tour of sites related to King’s life. It starts in Atlanta, travels to the Alabamian cities of Montgomery and Birmingham, then ends in Memphis, Tenn.

“We want to go as journalists, as students, as teachers, to really uncover the stories that tie yesterday to today,” said Gilmore.

The question in the series’ title, “Where do we go from here?”, is the most important reason for the trip, “especially since Martin Luther King Jr. isn’t here today,” said Gilmore. “It is deeply important that we answer this question every day: ‘How do we take this forward?’  ‘How do we address the concerns of today?’”

“King’s Road: Where Do We Go From Here?” is an original series from UPR, a USU-based affiliate of National Public Radio. The series premieres March 29, and weekly episodes will continue through April. More details can be found at upr.org.

The USU Civil Rights Pilgrimage students will host a community movie showing April 16 at 7 p.m. in the Eccles Science Center room 130. The Academy Award-winning documentary “Mighty Times: The Children’s March,” is a 40-minute film about how the young people of Birmingham, Ala., braved fire hoses and police dogs during a 1963 march. The movie night is free and open to the community.

Utah Public Radio is a statewide, listener-supported public radio station with a goal to bring educational and entertaining radio content to its listeners. UPR is a service of the College of Humanities of Social Sciences at Utah State University.