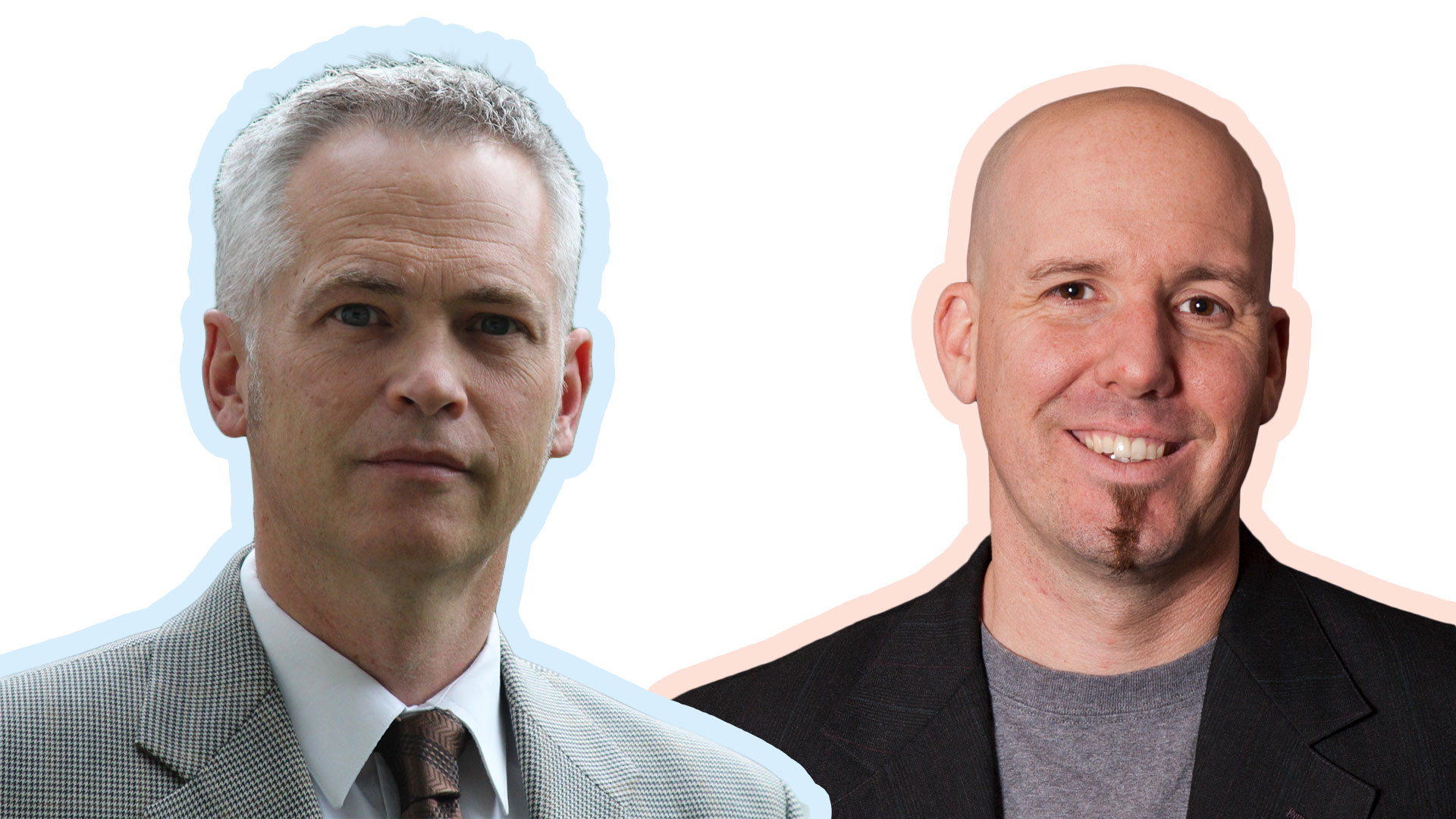 Two Utah State University professors whose classroom lectures often begin with the words “So, there I was,” were awarded for their journalistic work on Thursday.

Brian Champagne and Matthew LaPlante were recipients of multiple awards for television, radio and podcast reporting from the Utah Society of Professional Journalists.

“These awards are another affirmation that when we tell our students ‘We know this stuff because we do this stuff,’ it’s really true,” journalism and communication department head Susan Polster said. “And in a field like journalism, which is changing so incredibly quickly, it’s good to know that we have faculty members who are active in the field, doing relevant work, and even being awarded for it.”

In fact, Champagne and LaPlante won several awards in journalistic fields that are relatively new to them. Champagne, a career television reporter, was named Utah’s best radio reporter for his work with Utah Public Radio. LaPlante, a career newspaper reporter and author, is the founding producer of UnDisciplined, a science-themed program that was named the state’s top podcast.

“It’s nice to be honored by your peers, but the best part about these sorts of things is knowing that you’re still relevant to your students,” said Champagne, a frequent contributor to television news stations in Salt Lake City and the lead author of the textbook Writing for Electronic Media.

Both professors also shared awards with former students — Champagne with FOX 13 reporter Erin Cox, and LaPlante with Utah Public Radio producer Naomi Ward. Both women were working professionally before they had even graduated from Utah State.

“Most of my assignments involved going out into the community, interviewing real people, and documenting real events, which gave me valuable insight into what it’s like working in the field,” Ward said. “I think that’s one [of the things that this] department does best. It prepares its graduates for careers in journalism and really teaches them to swim before pushing them into the deep end.”

LaPlante, a best-selling writer whose recent work includes a feature article on climate change that won the 2021 American Society of Journalists and Authors’ award for science writing, said he was pleased to learn that the radio program and podcast he launched about two years ago was deemed worthy of an award.

“It turns out that you can teach new tricks to old hacks,” said LaPlante, using a term that is sometimes derisively used to describe deadline-oriented journalists. “And if Brian and I can pivot, learn new skills, and succeed in these fields, and do it while teaching, we know our students can, too.”

Among the Utah State University students and graduates who picked up top awards on Friday were Cox, who was lauded for her coverage of the COVID-19 pandemic; Jeffrey Allred, who won multiple photojournalism awards; and Matilyn Mortensen, who was honored for her profile of a woman who launched a social media movement to celebrate small acts of kindness.

“The USU journalism program taught me that the best stories not only help us learn more about the world, but more about ourselves,” said Mortensen, who has worked as a newspaper reporter and radio news director since graduating from Utah State’s journalism department. “Having professors who still work in the field meant I learned from their first-hand experiences the skills I need to work in the industry. Their investment to their craft and in me as a student was essential in shaping me to be the journalist I am today.”