Do our true selves endure over time?

If you’re seeking an answer to the most important question in the galaxy, you might track down wise, old Gandalf. He is, after all, a wizard.

Or, BBC Radio has another suggestion: his twin, “Gandalf with glasses.” That’s how Philosophy Prof. Charlie Huenemann described himself in a recent interview with the BBC. His students over the years agree with this label.

So, what is the question universally asked, especially by science fiction devotees? It’s this: When Capt. Jean-Luc Picard beams aboard the Enterprise, do the carbon atoms that make up his body make the leap, i.e., are the molecules compressed into a data stream?

Or is he basically replicated aboard ship using his cellular coding, memories and other neural impulses — basically a blueprint of “him”?

That exact inquiry was made on “Naturebang,” a BBC Radio4 program in which, according to its website, “science meets storytelling with a philosophical twist.”

Huenemann recorded the interview with the London hosts at the Utah Public Radio studio. You can listen to it at the link below.

The program’s hosts were inspired by, of all things, a sea sponge (otherwise known as a loofah”). In a weird scientific phenomenon, when a sea sponge is put through the grinder (literally) and made into mush (literally), it reassembles itself (literally). It may take a few days, but all the stray atoms combine to remake the creature into what it was before.

Thus the question, Is it really the same sea sponge? In other words, the radio hosts wondered, are we humans merely a prearranged collection of atoms?

Luckily, they found Huenemann, a philosopher and groupie of all great queries. He’d written an article in Aeon, an international digital magazine focusing on culture and ideas, that asked the same question. He titled the piece, “If I tele-ported from Mars, does the original me get destroyed?”

“The world of science fiction has been playing with the idea of teleportation devices since the late 19th century,” said host Emily Knight during the broadcast. “And as long as the idea's been around, it's been messing with philosophers.”

So, of course, philosophers like Huenemann are eager to take on this “thought experiment,” commonly known as the “transportation paradox.” And, of course, Huenemann said in a later interview, share it with students.

The thought experiment goes like this: “I'm stranded on Mars,” says Huenemann. “The fuel tanks for my return vessel ruptured, and no rescue team can possibly reach me before I run out of food. But, luckily!, my ship has a teleporter machine which scans my body and produces an amazingly detailed blueprint that is beamed back to Earth, where a new me is constructed using raw materials that are available there on Earth. All I have to do is step in, close my eyes and press the red button.”

Far away on Earth, the space traveler appears, steps off the teleporter, enjoys a shower and eats a home-cooked meal for the first time in ages.

Rationally, says Huenemann, “I can see why this should work because I'm just a particular configuration of carbon molecules. So long as they’re all organized in the same way, it shouldn't matter.”

But what about the scene on Mars? There, a duplicate (or the same) individual walks out of the telemeter, destined to starve? This is the question he poses to students.

“It’s a paradox,” said Huenemann, “because it throws up a question: Does the machine transport you across the universe? Or, does it  kill you and make a new version of you on Earth with all your memories and personality intact?”

A question for philosophy

This cosmic conundrum become a philosophical question because it’s basically asking, is there an “enduring” self that stays the same over time and space?

But, Huenemann challenges them, asking whether these two versions of “you” — one alone and starving, and the other now surrounded by friends — are really the same. “Can one person,” he asks, “experience such very different chains of experience?”

In class, he says, “It’s so interesting to see them grasp for different solutions and, as they think through the implications, realize it's not going to work. They say, ‘If I believe that, then I'm going to have to also believe this uncomfortable consequence in this other case.’”

This paradox has a particularly long history of confounding humans. Ancient philosophers considered the paradox using a ship as a metaphor, but Huenemann’s example is a car, particularly one that’s been repaired time and again.

“Over time,” said Huenemann, “you’ve changed every part of your car, but you still see it as your car because the changes have been gradual. You say, ‘I’ve maintained ownership over this. It’s my car.’”

But what, he asks, if someone had followed you and gathered up all those discarded parts? “What if they collected everything in a garage and then reassembled it all into a car? In some sense, that has a better claim to be your car because it’s all the original parts,” said Huenemann.

Not who, but where and when

Huenemann the philosopher has concluded that the “matter” of our bodies isn’t that big a deal. A carbon molecule is a carbon molecule. But we each have a personal “blueprint.” Assign your blueprint to any collection of carbon molecules, and you’ll get you — theoretically.

Actually it’s less about the blueprint than it is “the way that structure is engaged with other people and with its environment,” he said. “And that goes back to the point of how much of ourselves, how much of our abilities, are determined, not just by internal intrinsic features, but by our relationships to others as well.”

For instance, Einstein may not have changed the way we think about science if he’d lived a century earlier.

Although each of us changes subtly day to day, he says, “we kind of inherit the obligations of previous cells. So if I made a promise a week ago, I'm still obligated to make good on that promise.”

However, he adds, “there is a deep sense in which I'm not the same thing and not the same person. So you have to kind of live with the fiction of being the same over time. And that's useful and a good thing. But it is a fiction.”

The host, Emily Knight, has the final word in the podcast: “Perhaps being me is as much about where I am than what I am.” 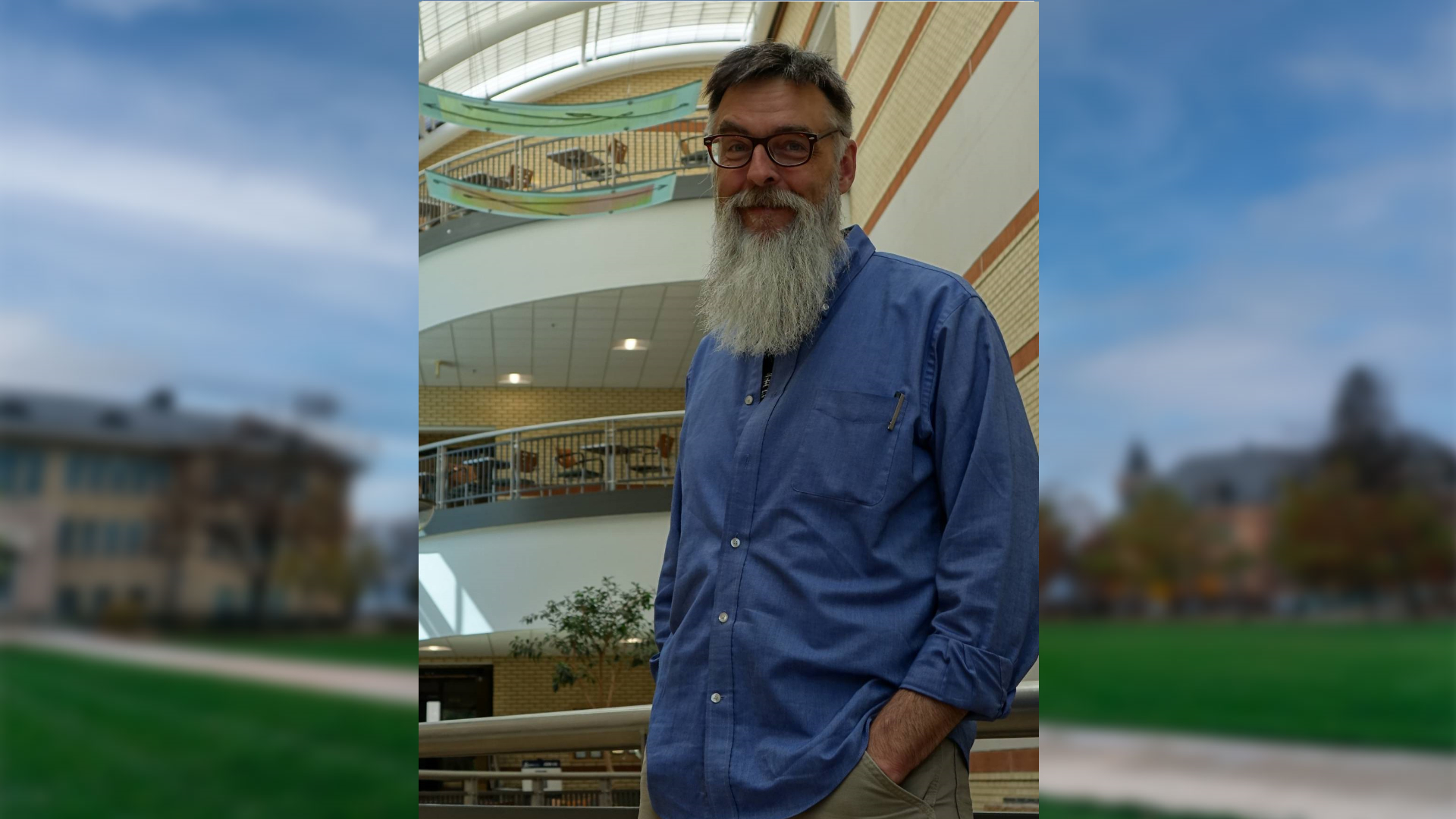 Book recommendations from the active, wacky mind of Charlie Huenemann

As a guy who can be described as ‘Gandalf with glasses,’ Philosophy Prof. Charlie Huenemann is a geek. Surprise.

"I'm a big sci-fi nerd. I read a lot of sci-fi and see a lot of sci-fi movies.
"One of my favorite sci-fi authors is a guy named Neal Stephenson. He  resists the term sci-fi, and he calls it instead speculative fiction. He defines speculative fiction as fiction that takes ideas seriously. And that is, I think, what draws me to sci-fi and draws me to philosophy is that in both genres it's about what would happen if we had this technology, or what would happen if we didn't have this idea. What would happen if these two ideas came together in a way that they didn't happen to have happened on earth?"

Other authors:
Dan Simmons: "He wrote a pair of books, Olympus and Ilium, which are retellings of the Iliad and the Odyssey, but set in a far future sort of setting that's fascinating. He's a brilliant writer."

China Mieville: "His books are very Lovecraftian and very darkly compelling in a way. I've read that he studied anthropology, so when he creates an alien culture, he's conceived it from A to Z. They have their own way of being and their own mannerisms in their own language. It's a really rich world that he creates in Perdido Station, which is a hair-raising novel."