Students, professor make history as their class is filmed for C-SPAN series 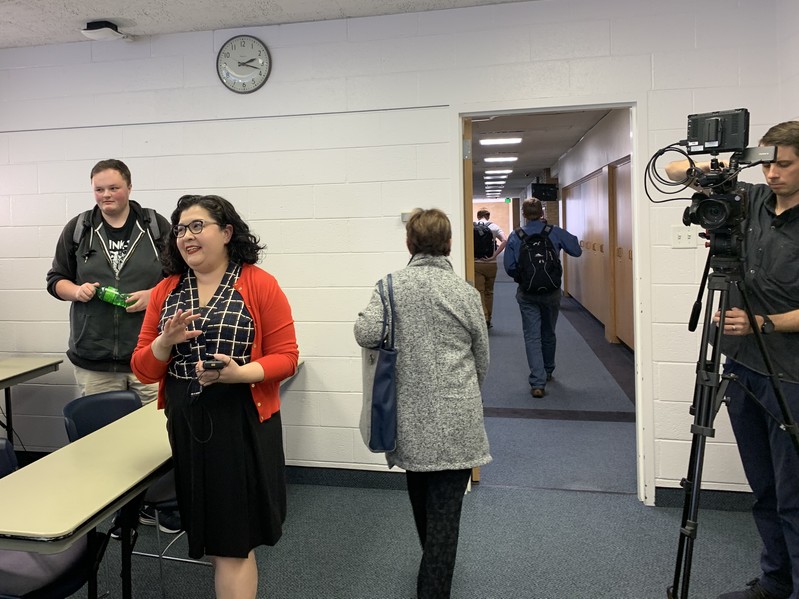 Angela Diaz, an assistant professor of History, smiles in relief at the conclusion of her lecture on Tuesday, which was filmed by C-SPAN crews as part of its American History TV series. The periodic series broadcasts lectures of university professors from across the country. At left, student David Bauman waits to ask Diaz a question.

Facts about C-SPAN's American History TV programming:
• 'Lectures in History' airs Saturdays at 8 p.m. and midnight EST on C-SPAN 3.
• C-SPAN's American History TV airs for 48 hours each weekend on C-SPAN 3, from 8 a.m. Saturday to 8 a.m. Monday.
• American History TV is broadcast on holidays and when the U.S. Congress is out of session.
• Episodes of 'Lectures in History' are also podcast and are the most-downloaded of all C-SPAN podcasts.
• C-SPAN tapes about 45 college classes each year.
• This is the C-SPAN's third such filming in Utah, with earlier ones at University of Utah and Weber State.

With two minutes until show time, she offered this plea to students, “I’m nervous I’ll get your name wrong. So just go with it.”

That brought a laugh, and the tension in the room chilled. A film crew from C-SPAN’s American History TV tweaked final details as they waited for Diaz to begin her lecture on the Civil War.

Just before the camera light  blinked on, she added, “Here we go, for better or for worse.”

It was definitely for better. All went without a hitch, said Diaz, an assistant professor of History, following the Tuesday film session. And she didn’t get a single name wrong.

Diaz’s upper-division class, “The Civil War and Reconstruction,” was chosen by C-SPAN to be included in its "Lectures in History." The periodic series records and broadcasts classroom lectures by university professors from across the country. The last such segment C-SPAN aired, for instance, was University of Pennsylvania professor Daniel Richter discussing “Native Americans and Colonial-Era Power Struggles.” 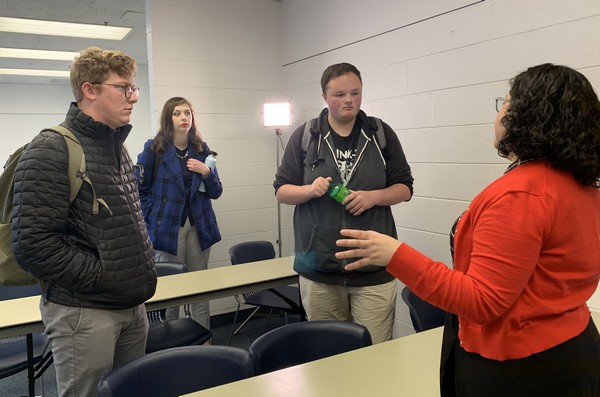 Assistant history professor Angela Diaz speaks with students following CSPAN's filming of her class and lecture. The lecture is part of C-SPAN's "Lectures in History" to be broadcast in spring 2020. The history students are Ethan Hansen, Rachel Walker and David Bauman.

According to C-SPAN producer Russell Logan, the weekly "Lectures in History" series allows viewers to go into college classrooms around the country to hear lectures on a variety of American history topics.

"Because these are real classes," he said, "they look and feel a bit different than many of our other programs, which are often talks or panels taped at public venues."

Diaz’s research focuses on American interests in Latin America and the states along the U.S.-Mexico border during the Civil War era.  The book manuscript she is finishing is titled A Continuous State of War: Empire-Building and Race-Making in the Civil War Era Gulf South.

She was recommended to C-SPAN by historian Peter Carmichael, a colleague who directs the Civil War Institute at Gettysburg College. Then, C-SPAN checked its records, said Diaz, “and they realized they had never shot a lecture at USU.”

C-SPAN producers told her she could pick the subject of her lecture, but she stayed with her curriculum and the scheduled lecture on the Civil War in the American West. Plus, she added, “We’re in the Mountain West, and I thought it would  be a nice paring.”

Many Americans don’t even put the West and the Civil War in the same sentence. “We talk so much about things like Gettysburg, but nobody really talks about what happened beyond Virginia or Pennsylvania,” said Diaz.

“It’s important for Americans to consider the full impact of the Civil War. Everywhere in the United States felt the impact of the war.”

The class has about 20 students, the majority of them pursuing majors in the College of Humanities and Social Sciences. But the subject of the Civil War draws curious students from across campus.

Even as a youngster in her home town of Kyle, Texas, Diaz was also drawn to the era because, she says now, it was “a cataclysmic moment where everything changes.”

The production and editing of each Lectures in History episode requires several months, said Logan. The program is expected to air sometime in March 2020.
During the filming on Tuesday, a crew member with a boom microphone moved about to catch questions from students. Afterward, Diaz laughs, “I was really hoping they wouldn’t ask me hard questions. And then they asked hard questions.”

She was surprised, she added, by how quickly students’ focus turned from cameras to the Civil War. “The students really did well,” she said “I'm very proud of them.”

As for herself, she said, “My brain just went, ‘OK, it's class time, and now you're supposed to teach.’” And she did.