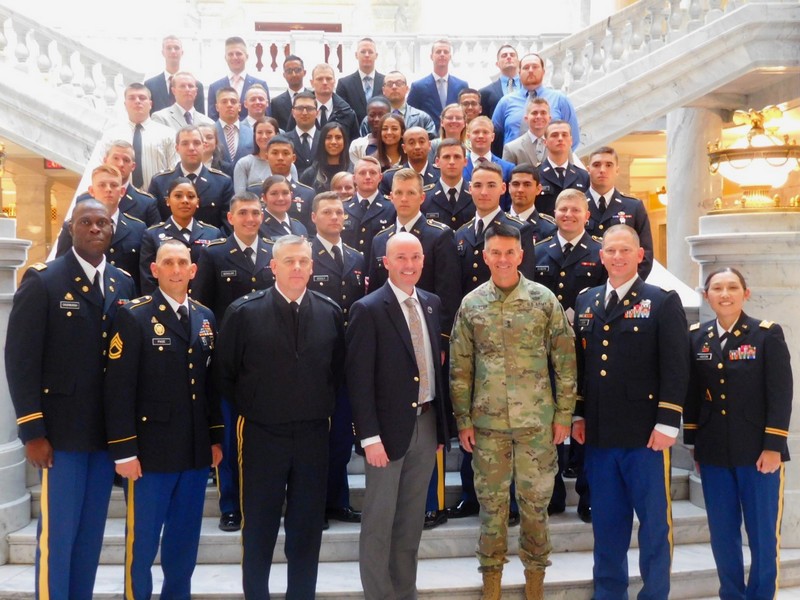 Utah State University U.S. Army ROTC cadets were reminded of the importance of positive relationships between the military and elected government officials during a recent visit to Utah State Capitol where they met with Utah’s Lt. Gov. Spencer Cox and Maj. Gen. Jefferson Burton, the highest ranking officer in the Utah National Guard.

Cox spoke to the group of about 40 cadets on the benefits of having ROTC programs at Utah’s universities, as well as how the highest-ranking officer in the Utah National Guard is chosen.

The ROTC named the visit “Operation Resolute,” said U.S. Army Capt. Emeka Chukwurah. “I felt it spoke to being able to bridge working with the military and working with politicians.” Chukwurah is an assistant professor of Military Science.

“Sometimes priorities can be different, but for us to be able to accomplish what we need to, we have to align our priorities with elected officials and others,” Chukwurah added.

This was the first excursion of its kind, and Chukwurah hopes to make it a tradition for cadets to tour the Capitol and have a meaningful dialogue with elected officials.

“It’s important for the cadets to understand that this is not just a field trip but an opportunity to appreciate how elected officials operate, including the symbiotic relationship that exists between officials and military leaders,’” said Chukwurah.

The cadets also heard from Maj. Gen. Jefferson Burton, the outgoing adjutant general of the Utah National Guard. "A good leader must always strive to improve themselves and learning new ways of doing things," Burton told the cadets.

Leaders, he added, "must read good books and strive to develop themselves intellectually."

Chukwurah said he considers Burton a mentor, and he takes to heart other recommendations the general offered, such as to always tell the truth. "You cannot go back, and more importantly you lose your credibility," he said.

Following Cox’s address, cadets were encouraged to ask questions. Many questions were military-focused, but others chose to ask about other topics. One cadet, for instance, asked the lieutenant governor about what Utah is doing to boost mental health resources.

Chukwurah said he was impressed by Cox’s open response to such an unexpected query. “He could have found such a question to be very off-putting, but he brought it back in and gave a response that made sense,” Chukwurah said. “He did not avoid the question, he answered it head on with facts and details.”

Chukwurah added that he appreciated the support Cox showed toward university ROTC programs and the military in general. Cadets, he added, were grateful to have a more personal conversation with elected officials and learn that “politicians are approachable, unlike how they are sometimes portrayed.”

Burton had this last piece of advice for the young cadets who are training to be officers in the U.S. Army and Utah National Guard: Take the time to read the U.S. Constitution. "If you are going to support and defend the Constitution, you must know what the Constitution says," he said.

'Sometimes priorities can be different, but for us to be able to accomplish what we need to, we have to align our priorities with elected officials and others.'
- Capt. Emeka Chukwurah