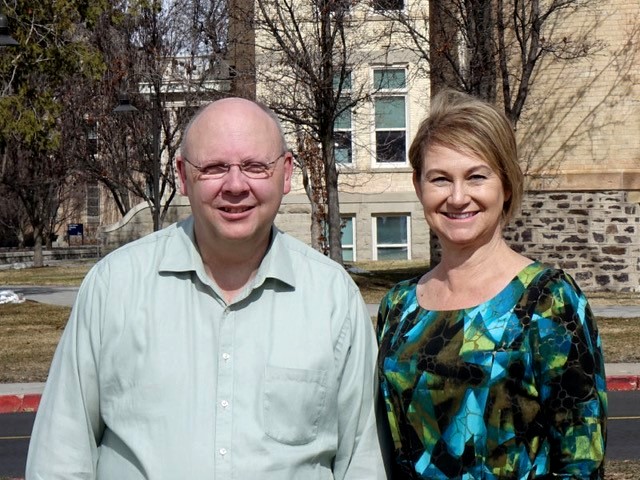 Listen to UPR at 91.5FM in Logan, or visit UPR.org

Things are changing behind the scenes at Utah Public Radio, but listeners will still hear a seamless stream of national and local news, original programs and lots of music.

Joseph Ward, dean of the College of Humanities and Social Sciences, announced that UPR news director Kerry Bringhurst and program director Tom Williams will immediately assume duties as co-station managers. Former station manager Peg Arnold, who was at UPR for four years,  is moving on to other opportunities, said Ward.

Both Bringhurst and Williams are longtime mainstays at UPR and are familiar to listeners statewide. The station, a National Public Radio affiliate, is heard throughout the state, with transmitters and translators broadcasting to many cities and towns, many of which have USU campuses or branches. UPR has a staff of nine full-time employees and is the oldest public radio operation in the state, signing on-the air in 1953.

Bringhurst, recognizable to listeners as the host of “Morning Edition,” has served as the station’s news director for over a decade and oversees daily news casts, as well as intern reporters and correspondents. Those duties will now be mostly assumed by Dani Hayes, assistant news manager and web content manager. UPR has nine fulltime staff, as well as always changing contingent of six to eight interns who report news, attend the microphone and produce programs.

Williams will continue as host of “Access Utah,” a daily, hour-long program that features conversations with local, national and international writers, newsmakers and subject experts. In his new role, he says, he’ll also take over administrative functions. Some of his previous duties will now be assumed by Chief Engineer Friend Weller and “All Things Considered” host and production manager Shalayne Smith Needham.

Coincidentally, Bringhurst and Williams, both graduates of CHaSS (Bringhurst in broadcast journalism and Williams in Liberal Arts), are also fellow Vernal natives. Williams began his UPR career in 1996 as operations manager. Always, he says, he had his parents in Vernal to keep him grounded.

Bringhurst says her transition into a fundraising capacity both excites and daunts her. After more than a dozen years on the air, she understands the fretful nature of a public radio station that relies for its existence largely on private donors.  In the near future, she’s expecting a  percent increase in the cost of NPR programs like  “Morning Edition,” “All Things Considered” and Market place morning report, some of our top programs, so we’re always looking for funding resources.

Beyond that, there’s what Bringhurst describes as the non-sexy costs, like transporting an engineer to a mountaintop somewhere to repair a malfunctioning translator – in winter. In all, the station maintains five transmitters, which generates radio waves via an antenna, as well as some 30 translators that receive the signal and rebroadcast it. The signal moves in daisy-chain style to reach such corners of the state as Woodruff,  Milford and Parowan.

UPR is also treading in a world of technology where a device just purchased is a device already outdated -- think of your cellphone. The station’s current project is replacing 10 receiving translators. It’s expensive and detailed, said Williams, “but all the listener needs to know is “What’s the signal in my town?’”

“That’s one of the challenges of a public radio station,” Bringhurst agreed. UPR greatly appreciates donations from people who specify a program they love. “But it’s a hard sell to help people understand that the technology is always changing, too, and that we need their support to maintain that,” she said.

Bringhurst deals with the stress of fundraising by anticipating a future that boasts of continuing programs from NPR and others sources like the BBC, as well as an expansion of the locally created and produced programs that connect the station with the community. “Really, we are community radio,” she said.

The two new station managers also see their role – especially at a station based at Utah’s only land-grant university -- as “bringing people together to talk about important topics,” said Bringhurst.

Or visit upr.org, which carries a listing of all power stations in Utah and all upcoming programs.