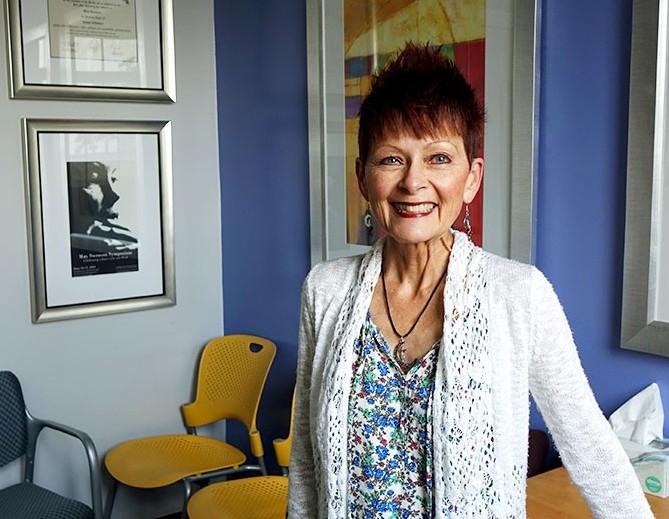 Star Coulbrooke, director of the USU Writing Center and poet laureate for Logan City, is overseeing a poetry contest to mark the upcoming groundbreaking for the Swenson House, a writers’ gathering space to be built on the site of the original Swenson family home at the base of Old Main.

“I rode on his shoulder. He showed me the moon.”

When she wrote that line in the poem “The Seed of my Father,” May Swenson was distant from her father and Logan childhood home — in both years and miles.

Now the Department of English  and other admirers of Swenson’s poetry are hoping to re-plant that seed in a poetry contest for student writers inspired by the many insightful  and exquisite lines of May Swenson poetry.

Deadline for entries to the Swenson Legacy Poetry Contest is Sept. 7. Winning authors will read their poems at the Sept. 18 groundbreaking for the newly imagined Swenson House. To be built at 669 E. 500 North in Logan, the site of the former Swenson family home, the Swenson House will be a retreat and gathering place for literary artists of all stripes, says Joseph Ward, dean of the College of Humanities and Social Sciences.

May Swenson is widely considered to be among the most influential American poets of the 20th century. And, a 1934 graduate of Utah State University, she’s perhaps its most famous alumnus. Since her death in 1989, faculty in the Department of English have continued efforts to keep her legacy alive.

The contest, said poet Star Coulbrooke, director of the USU Writing Center, is designed to do just that.

Coulbrooke and her writing students have created a list of poetry-writing “prompts” made up of lines from Swenson poems. The list can be found here.

Poets can also choose their own inspiring Swenson line, she said.

There are few other rules for the poetry entries, said Coulbrooke. “We want writers to use their creative ability. May Swenson broke all the rules and used her creative ability to expand poetry in a lot of ways people hadn’t thought of before.”

Cash prizes were be awarded: $300 for first place, $100 for second, and $50 for two finalists. Winners will read their poems at the Swenson House groundbreaking at 1:30 p.m. Sept. 18. Email entries to star.Coulbrooke@usu.edu.

Coulbrooke, who is the official Logan city poet laureate, will host a book-launch event for “Both Sides from the Middle,” a collection of her poetry released in conjunction with the Swenson House groundbreaking. All proceeds from the book sale will be donated to the Swenson House. The book launch is at 6 p.m. Sept. 16, third floor of the Bluebird Restaurant in Logan. The event is free and open to the public.

For more information on the Swenson House, see http://chass.usu.edu/swenson-house/

Suggested May Swenson poems with prompt-lines highlighted in bold

When I was little, when
the poplar was in leaf, its shadow made a sheaf,
the quill of a great pen
dark upon the lawn
where I used to play.

Grown, and long away
into the city gone,
I see the pigeons print
a loop in air and, all
their wings reversing, fall
with silver undertint
like poplar leaves, their seams
in the wind blown.

Time’s other side, shown
as a flipped coin, gleams
on city ground
when I see a pigeon’s feather:
little and large together,
the poplar’s shadow is found.

Starting at here,
and superposing then,
I wait for when.
What shapes will appear?
Will great birds swing
over me like gongs?
The poplar plume belongs
to what enormous wing?

The Seed of My Father

I rode on his shoulder. He showed me the moon.
He told me its name with a kiss in my ear.
“My moon,” I said. “Yours,” he agreed.
And as we walked, it followed us home.

Hold my hand, he showed me a tree,
and picked a peach, and let me hold it.
I took a bite, then he took a bite.
“Ours?” I asked. “Yes, our tree.”
Then with a hoe he made the water flow beside it.

When I was older he showed me the sun.
He made me a wooden wheel on a stick,
of pine wood, raw and bright as the sun.
I used to run and roll it.

A flashing circular saw was the sun,
like the one he made my wheel with.
“This little wheel belongs to me, the big one
to you?” “Yes,” he agreed, “just as we
belong to the sun”

He let me plant the corn grains one by one
out of a long hollow slip-box thrust in the ground.
“I who plant seeds for my father,
I am the seed of my father.”

And when the corn was tall, it swallowed me all up, all,
whispering over my head. “You are the seed of your father.”
And when the husks were sere, my father with a rake,
in the cold time of the year, made a bush of gold.

He struck the bush to burning for my sake.
I stood at his shoulder, a little higher.
I was the seed of my father, my father
outlined by the fire.

He made a garden, and he planted me.
Sun and moon he named and deeded to me.
Water and fire he created, created me,
he named me into being: I am the seed of my father.

His breath he gave me, he gave me night and day.
His universe is in me fashioned from his clay.
I feed on the juice of the peach from his eternal tree.
Each poem I plant is a seedling from that tree.
I plant the seed of my father.

I hope the astronauts will always have to wait
till you get off the prairie
because your kick is lethal,
your temper worse than the megaton.

I hope your harsh mane will grow forever,
and blow where it will,
that your slick hide will always shiver
and flick down your bright sweat.

Reteach us terror, weather,
with your teeth on our ships,
your hoofs on our houses,
your tail swatting our planes down like flies.

Before they make a grenade of our planet
I hope you’ll come like a comet,
oh mustang—fire-eyes, upreared belly—
bust the corral and stomp us to death.

“Iconographs.” Collected Poems, by May Swenson and Langdon Hammer, Library of America, 2013, pp. 306.

To a Dark Girl

Lie still and let me love you
with all my weight
urgent upon you
Deep-keeled elate
my body greets you a leaping boat
challenging your tide
to be the stronger
And not afloat
lie still no longer
Demand I love you
the more the more
while passion’s breakers
bear us to their shore.

What I Did on a Rainy Day

Am I the bullet
or the target
or the hand
that holds the gun?
Or the whisper
in the brain saying aim, fire?
Is the bullet innocent though it kill?
Must the target stand unblinking and still?
Can one escape, the other stop, if it will?
Will the trigger-finger obey through force?
If the hand reverse command,
will the pregnant gun abort its course?
The brain,
the brain, surely it can refrain
unclench the gun, break open
the pod of murder,
let the target rise and run.
But first the whisper must be caught,
before the shot—
the single wasp be burnt out,
before the nest, infested, swarms with
the multiple thought—
each sting the trigger pressed!