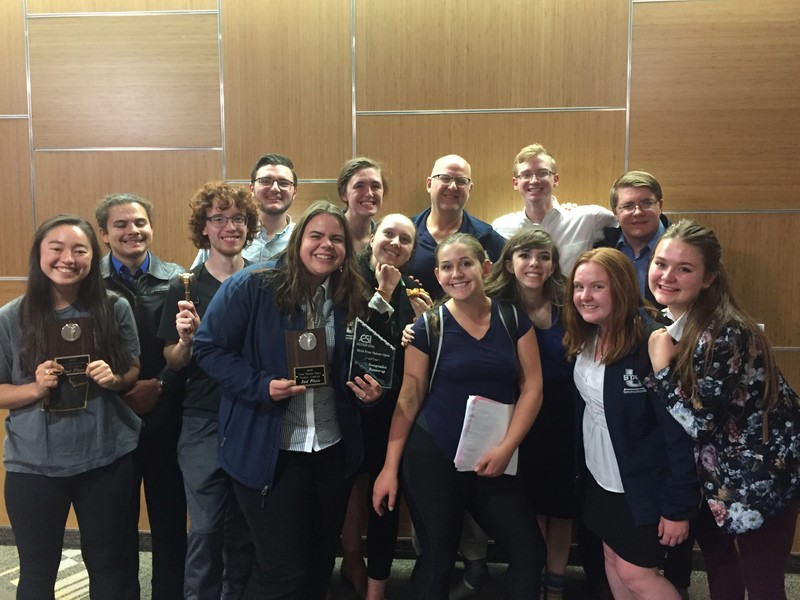 Members of USU Speech and Debate team members began the academic year’s tournament season with three sweepstakes and other top wins on Oct. 12-14, 2018, at Lewis and Clark College in Portland, Ore. The team’s coach is Tom Worthen (back row, third from right).

The Oct. 12-14, 2018, competition of 33 colleges and universities, held at Lewis and Clark College in Portland, Ore., featured what Coach Tom Worthen described as “the largest team USU has had in recent years.” His conclusion, after seeing the team in action, is that the team members “show a lot of depth,” he said.

“We have competent students who are showing they are the best in the Northwest in every division of competition,” he said. “It is a joy to coach these students.”

Sam Hendricks and Tanner Petersen closed out the final round of senior debate in their respective divisions, finishing in first and second places. Kaleb Webb and Chantelle Gossner finished as semifinalists, with Jaydin Lowry as a quarterfinalist. Darius Reddersen, Ammon Teare, Rachel McDonald, Zoe Hall and Naomi Ward finished in the top eight.

“What sets Utah State apart from other colleges is that everyone contributes to team points,” said senior Petersen. “Our percentage of competitors who break is much higher than any other school.”