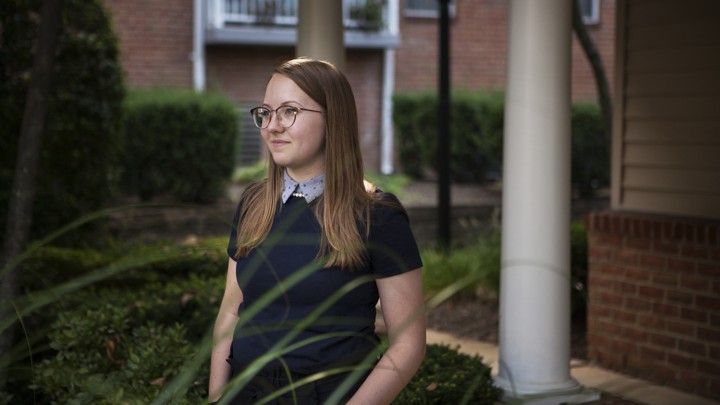 Kolbie Blume (English, 2014) is profiled in an article in The Atlantic about her years as the voice of Pres. Barack Obama. As a letter writer in the Obama White House, Blume responded to hundreds of Americans under the president's signature. (Photo from "The Atlantic" | Emily Jan).

Kolbie Blume hadn’t met United States President Barack Obama, but she had studied and was familiar with his voice. And it was her words -- in Pres. Obama’s voice -- that calmed and inspired the Americans who wrote to him with their questions, difficult experiences and hopes.

Blume’s experience in the White House’s Office of Presidential Correspondence (OPC) is now detailed in a new personality feature appearing this week in The Atlantic magazine. The article, “The 22-Year-Old Who Wrote Barack Obama’s Letters,” written by Rachael Allen, was published Aug. 28. Now 25, Blume was one of a small staff of writers who responded to hundreds of letters that Obama himself had read and indicated “reply” in his own handwriting.

Kolbie Anne Astle Blume is a 2014 Utah State University honors graduate in English, who now lives with her husband, Joshua Blume, in Falls Church, VA. Joshua himself is a fellow USU honors student and graduate of the College of Humanities and Social Sciences.

As an honors student, Kolbie Blume worked with Professor Brian McCuskey, professor of  Englis,h on her honors thesis "Educating Wonder Away: Charles Dickens's and Lewis Carroll's Attack on Victorian Education." During her years as an English undergrad, Kolbie also worked with Prof. Joyce Kinkead, on a project that resulted in the publication of an article, “Digital Literacy and Young Adult Literature,” in an issue of Utah English Journal. She noted that the research led her to examine how students learn about and through technology.

Read the Atlantic article about Blume at https://www.theatlantic.com/politics/archive/2018/08/kolbie-blume-presidential-letters/568690/.