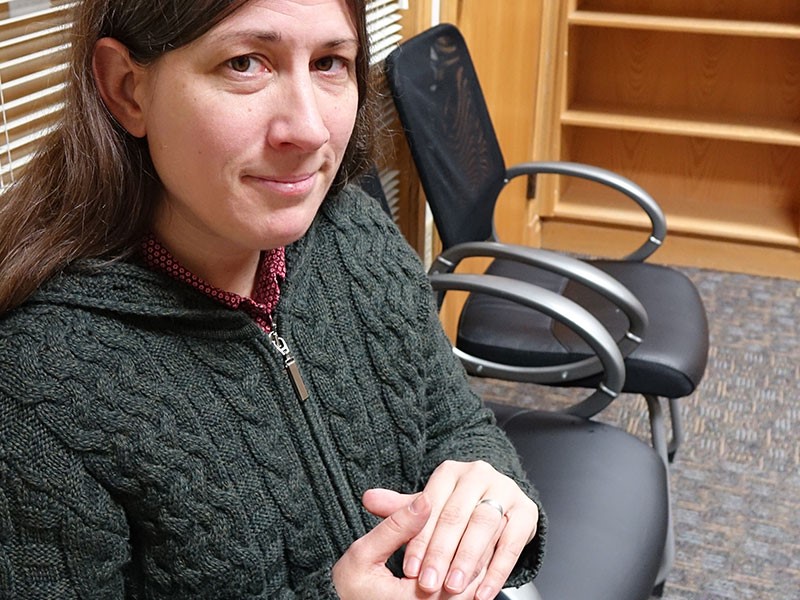 Among those displaying their family heirlooms and other WWI-era relics at Saturday's We Remember Them Roadshow will be Danielle Ross, assistant professor of history. Her wedding band was originally purchased by her great-grandfather when he was a U.S. soldier serving in France in 1917. The ring, since worn by all the women in her family, is made from a coin.

You inherited great-granddad’s steel helmet that protected his 18-year-old head in the trenches of France in World War I.

If that helmet could speak, if that gas mask or mess kit or faded telegram could whisper, we guarantee they’d be saying “Share me, remember my story.”

One of the organizers, Evelyn Funda, an associate dean of the College of Humanities and Social Sciences and one of two professors for a course focusing on 1918, describes the event as a cross between the PBS show “Antiques Roadshow” and NPR’s “Storycorps,” which shares memories of everyday Americans.

The community is invited, she said, to show off  antiques and other artifacts from the Great War and retell family lore about that era.

“The family heirloom that is so personal also gets to be a part of history,” said Funda. “It’s just meaningful to be able to say, ‘My great-grandfather‘s diary is recorded in an archive.’ It becomes a part of the documented history, but then you get to take it home and pass it on to your grandchildren.”

All community members, with relics or not, are invited to attend. Organizers welcome the curious bystander who just wants to see what other people are displaying. “It will be an opportunity to look at each other’s items and go, ‘Oh yeah, I remember one of those from my family,’” she said.

The “We Remember Them” Roadshow is part of Utah State University’s nearly month-long commemoration of the centennial of Armistice Day, the momentous moment on Nov. 11, 1918, when the Great War ended by treaty. 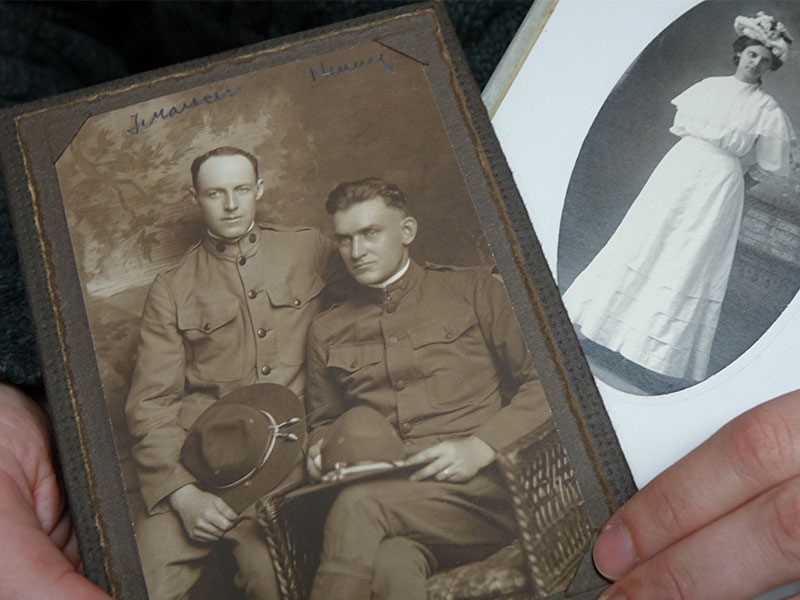 History assistant professor Danielle Ross shows off photographs of her great-grandparents. Her great-grandfather, Henry van Dyke, brought a ring home from the battlefields of France for his sweetheart, Veronica Cecilia Stay. (Van Dyke is the man on the right.) They were married in Montevideo, Minn. The ring is among Ross's most valued family heirlooms.

We Remember Them Roadshow was organized by students in a history course focusing on the culture, literature and history of that era, which is being taught by Funda, a professor of English, and history professor Susan Grayzel.

The students, said Funda, are inviting the public to consider how the distant European battles changed a small farming community in the mountains of Northern Utah. When America entered WWI, soldiers and sailors boarded ocean-crossing ships singing the most popular song of the time, “Over There.” But the war didn’t stay over there. Its ripples reached to the Cache Valley and other small communities nationwide, said Funda.

“We want to remind people of the broadness of World War I,” she said. “The world war came home. Everybody was following maps and newspapers, they were getting letters from soldiers, and women were knitting socks for the Red Cross. I think that’s the message of this event.”

The USU-based roadshow was inspired, in part, by the “Lest We Forget Online Database,” housed at Oxford University. The ongoing project collects stories, memories and objects of the First World War “before they are lost forever,” according to its website.

Funda said the purpose of Saturday’s gathering is three-fold.

Students will record stories and photograph objects, learning as much as the object’s story as possible. The results will initially be archived at the USU Museum of Anthropology.

Secondly, participants can chose to tell their stories to Utah Public Radio reporters. The recorded interviews, like “Storycorps,” will be archived and, perhaps, broadcast. The interviewee will receive a CD copy of the entire interview.

Lastly, the event features what Funda describes as a “pop-up  museum.” This new trend, she said, “embodies the idea of a temporary, ephemeral kind of display that is totally based on who is willing to participate.”

The show seeks to reflect the culture of the time and its impact well beyond the battlefield. Funda encourages community members to bring items from the home front as well as from their soldiers’ time in the trenches. But, she laughed, “I hope they leave the unexploded ordnance at home!”

Writer and contact, Janelle Hyatt, communications director for the College of Humanities and Social Sciences, Janelle.hyatt@usu.edu, 435-797-0289.