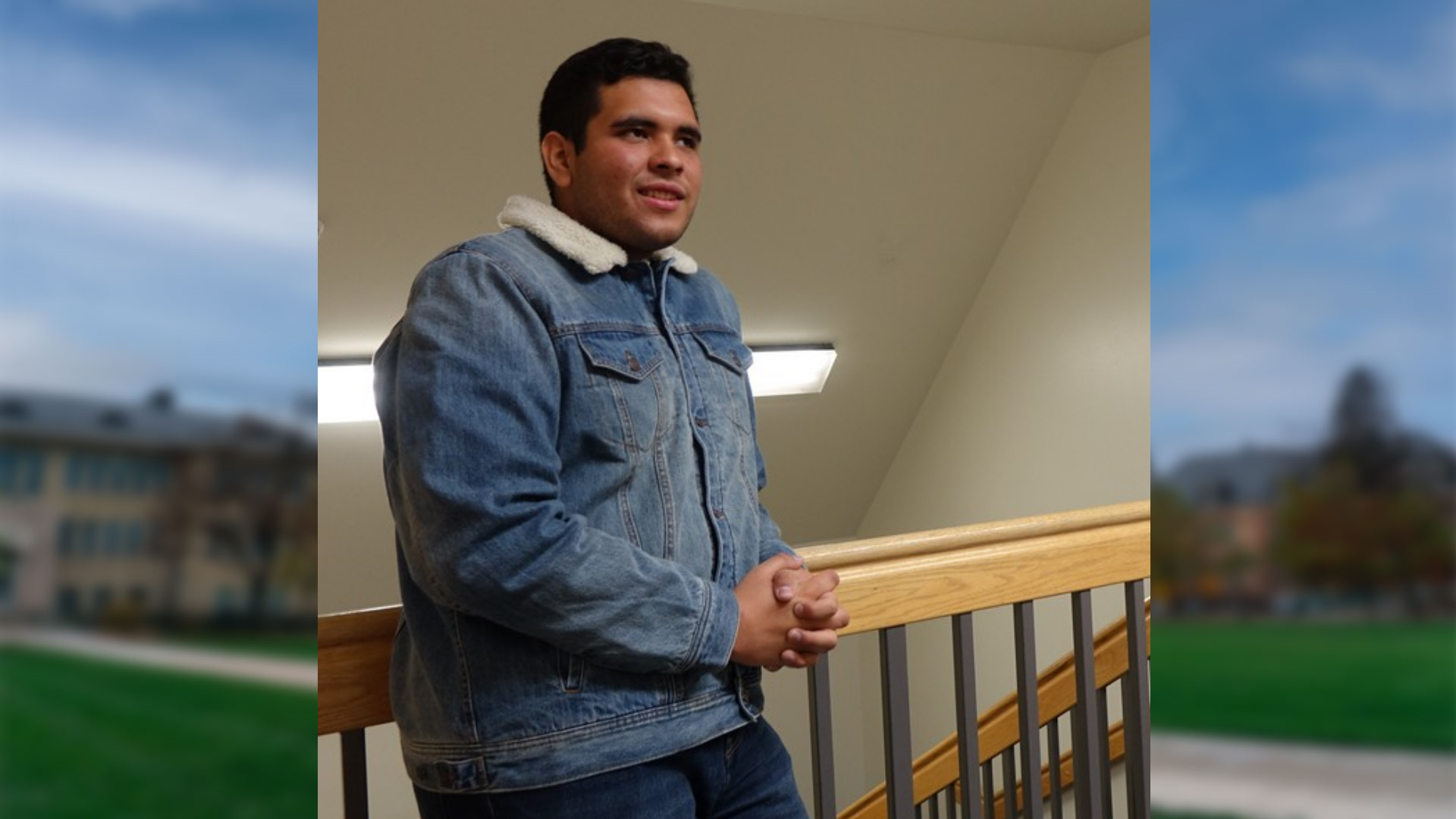 To read Carlos Gutierrez Gutierrez's winning poem, "Tu Sombra," scroll down to bottom of the story.

As the winner of  a prestigious, statewide writing contest, sophomore Carlos Andres Gutierrez Gutierrez is rethinking his future.

Now, he sees a future in which he can be a voice for other young people like himself: those living somewhere between the cultures of America and Latin America.

In October, the 19-year-old accepted the Sor Juana Award, a Utah Humanities statewide prize for original writing in Spanish. The award, now in its sixth year, was established by the arts advocacy organization Artes de Mexico en Utah before being incorporated into the Utah Book Awards.

“I wasn’t expecting to win the contest or even participate because my poetry is, like, my own thing,” said Carlos, who won for his original poem, “Tu Sombre (Your Shadow).”  “I never expected people to be interested in it.”

Carlos Gutierrez Gutierrez, now a sophomore majoring in Spanish and minoring in Political Science, came to the United States with his mother as an 11-year-old.

He was soon working in the fields of California’s Imperial Valley. His teenager’s schedule was grueling: at 3 a.m. daily he arrived for work in the fields, at 6 a.m. he hurried to school, and, after school, he headed to a second job cleaning houses. He did that for four years.

By 2014, however, such jobs were becoming scarcer, and Carlos, and he and his mother moved to West Valley City. He graduated from Taylorsville High two years later and transferred to Utah State University. At USU, he registered in a major that seemed familiar to him: civil engineering. “I used to work in construction with my dad,” he says. “I was always involved in construction, wood working, plumbing, and electricity.”

His dreams of an engineering career were upgraded to a future as an academic, perhaps a professor who is able to “promote a love for the language and the culture to other people,” he said.

Especially revealing, Carlos says, was his discovery of great writers who expressed all sorts of truths in their native Spanish.

“I tried to get my head around the classics like Shakespeare or Voltaire,” he said. “But they had their own voice of speaking to the people they were writing for.”

Soon, he was reading works in Spanish by Gabriel Garcia Marquez, Jorge Luis Borges and “even classical literature like Cervantes,” he said. “I began to really feel this connection with books. And now, I just can’t stop reading.”

Poetry, particularly, he said, doesn’t endure translation well and needs to be read in its original script. He explains, “Reading something originally intended to be read in one language loses a lot of meaning when it’s translated.”

One’s heritage language is also a richer ground for expressing intense, deep-seated emotions. Those were the very feelings that first  prompted Carlos to draft a few lines of prose as a high school senior. Ah, heartbreak. Fortunately, the experience was, he adds, “my beginner’s steps into poetry.”

Now he agrees with another favorite author, Carlos Fuentes. “He said he writes particularly in Spanish because that’s the language in which he loves, he hates, he curses,” said Carlos. “It’s the language that identifies him the most.”

Professor Spicer Escalante said Carlos had distinguished himself by his “tremendous drive to learn and grow.”

The sophomore, adds Spider Escalante, “reads voraciously and has a unique ability to recognize where he needs to fill in gaps when he lacks context, theory or general knowledge.”

Carlos’ winning poem, “Tu Sombre (Your Shadow),” describes the enigmatic attraction of a shadow that visits during the day and disappears at night. The  poem’s poetic voice, said Carlos, “talks to the shadow and says, ‘I can only see your silhouette. I can’t hold you, I can’t approach you, I can’t be emotionally attached to you. And then eventually you disappear when the sun sets.’” The poem’s theme is the comparison of a human’s seemingly immortal life to one that is so transient, he said.

In his accomplishment, Carlos sees an opportunity, even a responsibility, to be a voice for others torn between two cultures. It’s a demographic that hasn’t had a representative spokesperson, he believes. And he understands that for others, like himself, “being an American is more complex than just being from the U.S.”

He excited about the growing, flowing and changing movement of young Hispanics seeking to find their own distinct voices in American politics and culture. The movement, he says, has also swept in Latino LGBT voices and more or less solidified into a community now known as LatinX.

“It feels like LatinX is its own movement now,” he says. “There’s this new wave of identities coming upon us.”

Carlos’ mentor, Professor Spicer Escalante, sees Carlos as a new voice that will indeed contribute to all communities. “He is, indeed, a true diamond in the rough who has an excellent future ahead of him,” he said.