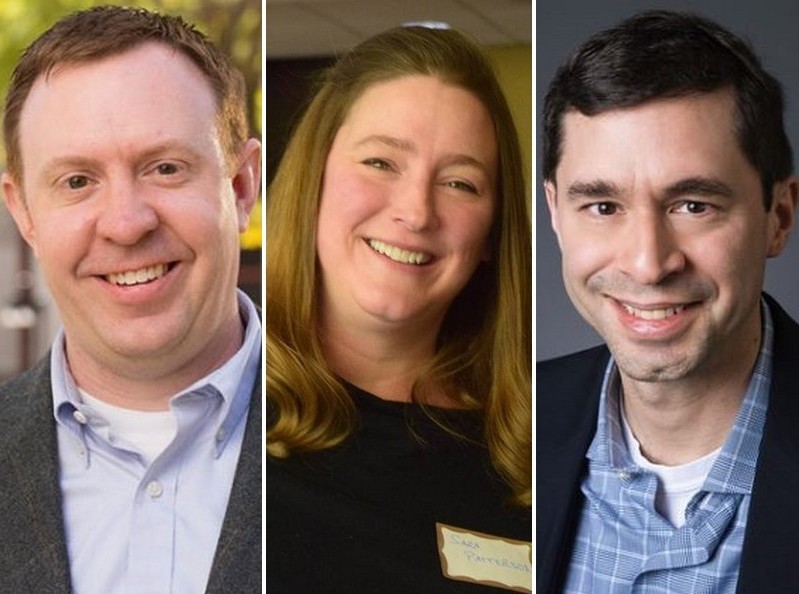 Three finalists have been named in a national search to replace Dr. Philip Barlow as the Leonard J. Arrington Chair in Mormon History and Culture. Barlow retires at the end of the year. From left, the candidates are: Patrick Mason, Sara Patterson and John Turner.

The Religious Studies Program at Utah State University has named three finalists in its search for the next Leonard J. Arrington Chair in Mormon History and Culture.

The endowed chair, dedicated to the academic study of the history and culture of Mormonism, was the first such chair in the world. The position has been held by the distinguished historian Philip Barlow since its inauguration in 2007. Following his retirement from USU in December 2018, Barlow will join Brigham Young University’s Neal A. Maxwell Institute for Religious Scholarship.

“We had a very strong pool of candidates,” said Professor Ravi M. Gupta, director of the Religious Studies Program in USU’s Department of History. “All three candidates are internationally reputed scholars of Mormonism, with different areas of emphasis in the field.”

The three finalists are:

Patrick Mason, the Howard W. Hunter Chair of Mormon Studies at Claremont Graduate University. He is the author of “What is Mormonism? A Student’s Introduction” (Routledge, 2017) and conducts research in such areas as Mormonism and politics; Mormonism, war, and peace; and American religious history.

Sara Patterson, associate professor of Theological Studies at Hanover College in Indiana. Her forthcoming book “Pioneers in the Attic: Place and Memory along the Mormon Trail” focuses on the role of place and landscape in Mormon history. The book will soon be published by Oxford University Press.

Each candidate will visit campus over a three-week period beginning in late October.

The professorial Arrington Chair is named after famed LDS historian Leonard J. Arrington, who died in 1990. A former economics-history professor at USU, Arrington is credited with encouraging and training a new generation of scholars that understands religion, its antecedents and paramount role in world history.

Former LDS Church Historian Marlin K. Jensen explained in 2016 that Utah State provides a unique setting for the independent, scholarly study  of LDS history and culture. The Merrill Cazier Library’s Special Collections and Archives houses the personal and historical papers of Arrington and other significant Mormon scholars. Over the years, Jensen added, USU has demonstrated “a lasting commitment to religious studies generally and Mormon studies specifically.”

In addition to its trend-setting chair of Mormon history and culture, USU’s Religious Studies Program focuses on a wide range of world religions, including Buddhism, Christianity, Hinduism, Islam, Judaism, and Native traditions. USU offers an undergraduate major and minor in Religious Studies, as well as an MA in history with a focus on the history of religion.

For additional information on the national search, visit https://religiousstudies.usu.edu/arringtonsearch