Alumnus shares his poetry with students in multiple languages 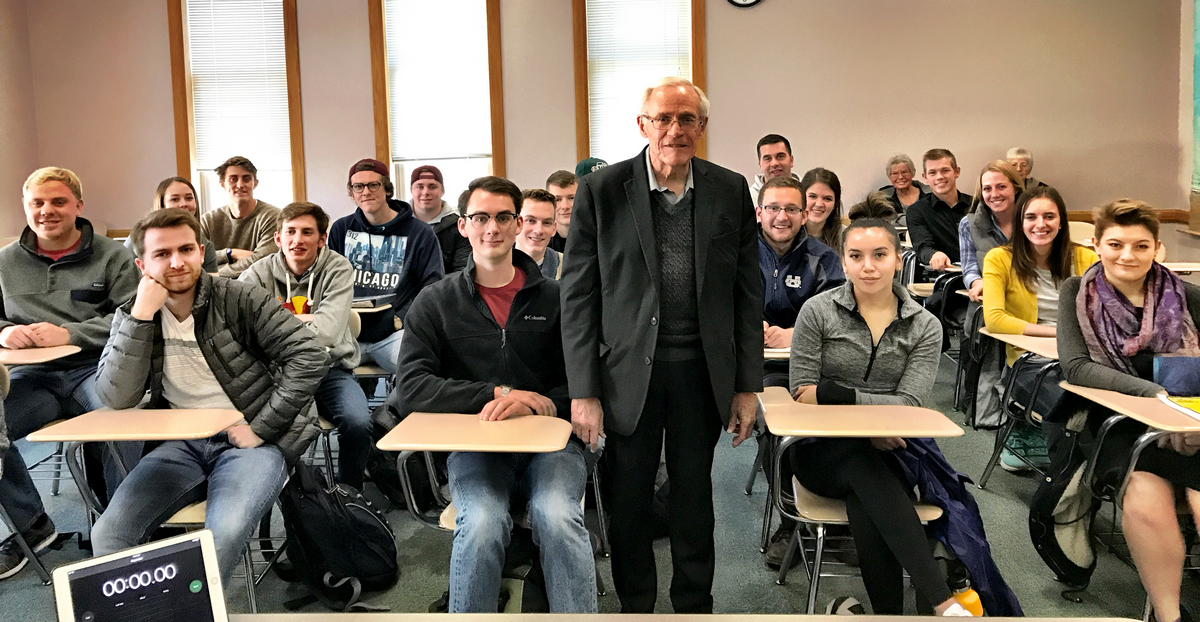 Glade Myler with students in a course on conversational Spanish and composition. He presented his poetry, which he writes in multiple languages.

A Utah State University alumnus who writes poetry in multiple languages shared his work recently with students taking a course in conversational Spanish.

Now, a video of Glade Myler's presentation can be found on the CHaSS YouTube channel.

Crescencio Lopez, the class instructor and an assistant professor of Spanish, said Myler's poetry ranges through such languages as Spanish, Portuguese and French.

Myler, now a resident of Carson City, Nev., grew up in Logan. He earned his bachelor of arts degree in Spanish with minors in Music, English and German. In addition, he speaks and reads four languages: English, Spanish, Portuguese and German in that order of fluency, also reading and speaking some French and Italian.

Following his retirement after a successful law career, Myler returned to writing poetry, a passion that began in college. His most recent book is Perspectives: Sonnets and Verse in English and Spanish. He also released another poetry book, Through the Eye of the Needle. Both are available at amazon.com or at the poet's website.See CHaSS videos, including Myler's presentation, at bit.ly/2lf1o25.

ABOUT THE COURSE: Lopez said the purpose of Advanced Spanish Conversation and Composition is to improve a student's oral and writing skills for use in academic and professional outlets in a context that examines current events within the Latin American and U.S. Latino communities. The course includes such business writing necessities as letters, memos and blog posts. It also offers instruction in conducting interviews and making presentations.

Lopez determines each student's level of proficiency at the start of the semester, he said. "I have students write a diagnostic essay and then give them multiple opportunities during the semester to write openly about personal and public topics.

"Through these written narratives, I am able to assess and help them improve their writing skills. Additionally, I engage my students in and out of the classroom by attentively listening to them speak in an effort to evaluate and make suggestions that will improve their speaking abilities," he added.