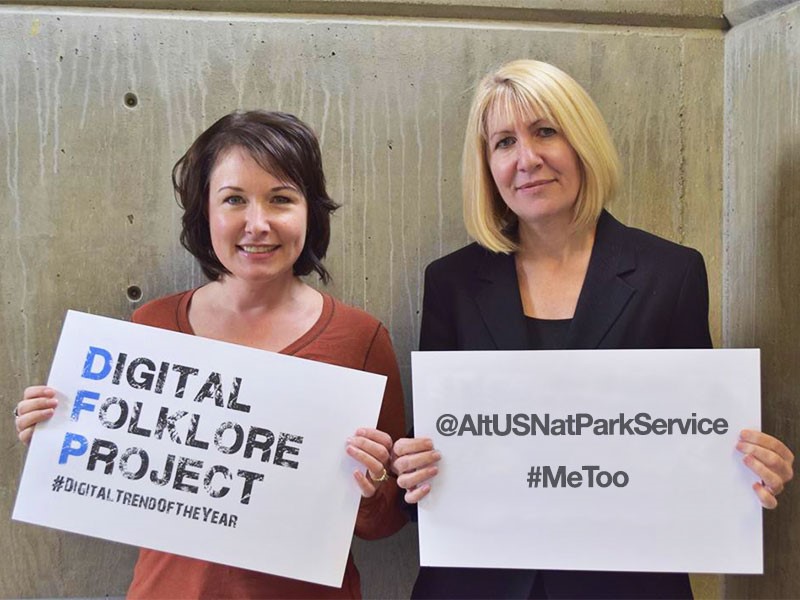 Dec. 14, 2017 — Folklore throughout history is ordinary folks’ reaction to the big themes of their time. And, in a year when climate change and sexual harassment dominate Twitter and national headlines, it’s fitting those hot topics are the 2017 Digital Trends of the Year.

The topics may be a bit more subdued than the 2016 winner, “creepy clowns,” Jeannie Thomas, who co-directs the DFP with Lynne McNeill, assistant professor of English. “Folklore is all about everyday culture, and dynamic variation is one of its hallmarks,” said Thomas, who also serves as head of the Department of English.

The internet, Thomas added, is today’s setting for folklore that was once shared over back fences. In fact, she said, the internet “functions like a ‘digital campfire’ that draws people together to share their stories and lore.”

The Digital Trend of the Year, launched in 2014, is selected by ballot among folklorists nationwide who look at such factors as cultural significance and whether the trend fits the grassroots, common-people usage that identifies it as folklore.

2017 is the first year the contest has ended in a tie. The #MeToo trend has been on Americans’ minds since it appeared in October. But the @AltUSNatParkService, which cropped up on Facebook in January 2016, also reflects this year’s overall theme of resistance, said Thomas.

The @AltUSNatParkService trend started with one official Twitter account “going rogue” in November 2016 when Badlands National Park in South Dakota began tweeting statistics of how climate has changed, said Thomas. The tweets were promptly deleted.

Since then, more than 100 “alt government” social media accounts on Twitter and Facebook have emerged. The grass-roots source, said McNeill, is in “everyday people sitting around at a computer and saying, ‘I’m going to be the rogue NASA.’”

She added, “It’s people saying, ‘I want these institutions to have a real voice that’s not hampered by a government that I disagree with.’

“I think there’s something to be said for that.”

The issue has come home to Utah with the recent announcement by President Donald Trump that the amount of protected lands in Bears Ear National Monument and other wild landscapes was being slashed.

By “this land” you mean “National Monument that belongs to all citizens.”

The Me Too movement was launched a decade ago by activist Tarana Burke, who created the slogan when she founded Just Be Inc., an organization promoting the wellness of young female minorities.

The latest incarnation of MeToo, this time as a searchable Twitter hashtag, arose from a tweet from actress Rose McGowan saying she’d been raped by movie mogul Harvey Weinstein. It was fueled by a Oct. 15, 2017, tweet by another actress, Alyssa Milano, that called upon other victims of sexual harassment, assault and rape to share their stories.

Unlike many social media trends, #MeToo has exploded from its digital origins into national headlines, said Thomas. The cultural significance continues to be measured by ongoing news prominent men losing their positions based on claims by ordinary people, she added.

Modern folklore trends often appear as memes, defined as a short video or captioned photo that reflects a social idea. Memes were the perfect format to feature 2016’s creepy clowns, including sinister Pennywise from the movie It. This is the first year the trend has been defined as an account, such as on Facebook or Twitter.

McNeill said she understands that the internet may seem an unlikely venue for folklore scholars to research. But “memes work online much like proverbs, jokes and folk art have always worked offline,” she said. Plus, she said, “Those interactions are preserved in a medium where folklorists can observe them after the fact.”

Memes not only “provide a view into what everyday people are really thinking,” added Thomas. “Often that view is massively entertaining or moving -- and may also involve cats and avocado toast.”

Unsure what avocado toast is? Ask the nearest millennial.

Here’s a list of the candidates on the Digital Trend of the Year ballot: