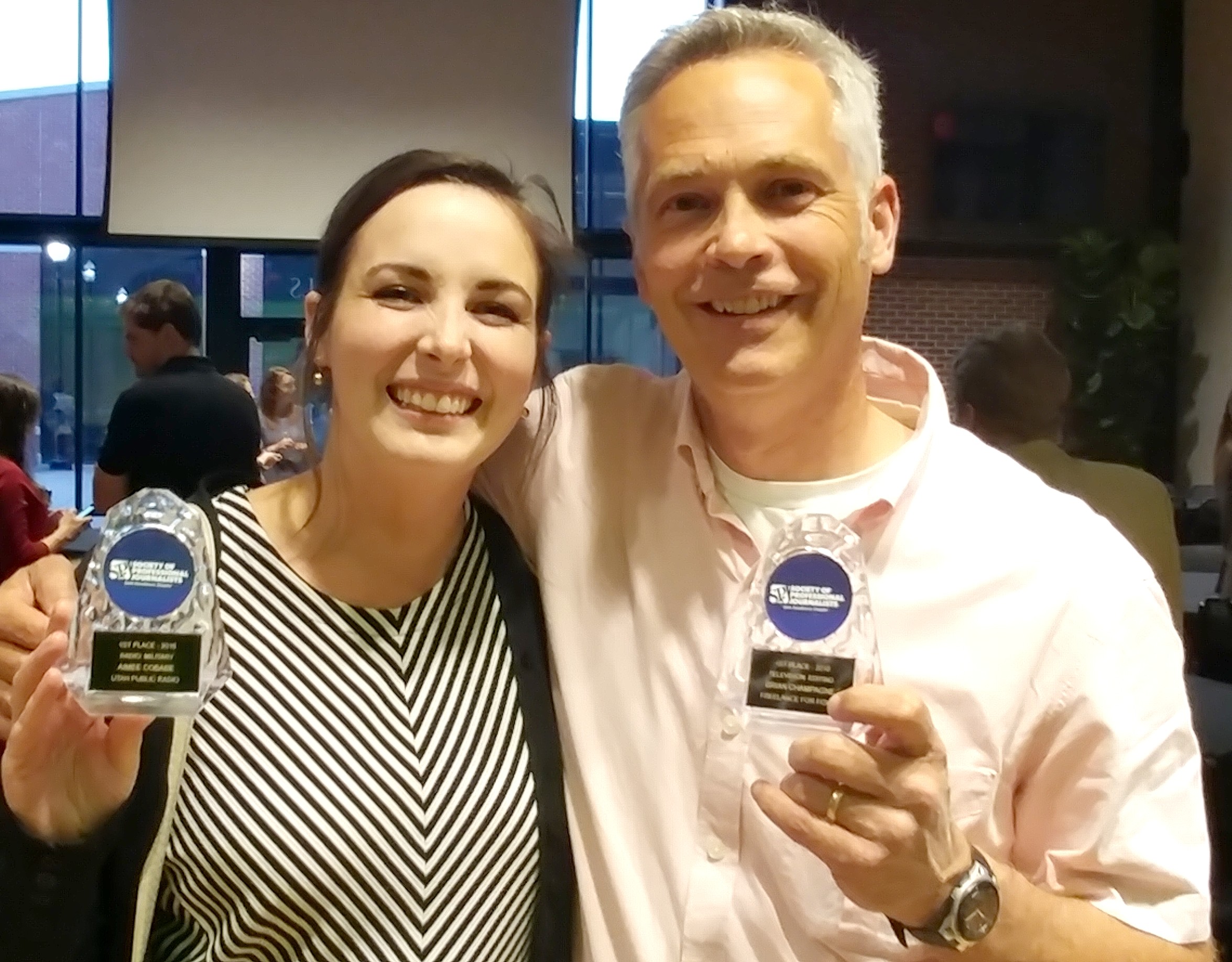 Aimee Cobabe and Brian Champagne, a lecturer in the Department of Journalism and Communication, show off their student Emmy awards at an October 2016 ceremony hosted by the National Academy of Television Arts and Sciences. (Photo from the Sanpete Messenger newspaper)

MANTI—Mid-Utah Radio has a brand new voice coming to its airwaves.

Aimee Cobabe has joined the radio group as news director at KSVC AM/FM.  Before coming to Mid-Utah Radio’s Richfield office, she worked for Utah Public Radio (UPR) as a news reporter, producer and special series director. She graduated from Utah State University with a degree in broadcast journalism in 2017.

Originally from Davis County, Cobabe won a 2016 Emmy Award for College Student Production with Aggie TV news and she also took home a Society of Professional Journalists award in 2015.

While Cobabe’s work at UPR extended across the spectrum on news and feature stories, she said one of her passions is covering land use issues in Utah — a sensitive and important topic in Sevier and Sanpete counties.

“I did a lot at UPR and took any opportunity to tell stories I felt were important,” said Cobabe. “We made some  great shows that were responsive to our listeners, and we made some  great shows about public land policy. I never thought I would be so into the story of land use, but I am excited about being in central Utah. The issues are there and are happening there. Public land use is not something you can just sit back and shy away from. There is a lot of perspective to it and a lot we can learn together because of that.”

Cobabe also lives her journalism—with what she calls a personal drive to tell the truth while working in the media and for the public interest.

“I think what is most important to me is that I report the truth,” Cobabe said. “Especially since we live in a time where stories are getting pushed out so fast, and they are becoming news, that in order to protect the trust in journalism, we need to put out the best news possible.”

“When training our students at UPR we emphasize the importance of communities,” Bringhurst said. “Having Aimee leave here to share news with residents there makes sense. She is familiar with agricultural issues and public land topics. Her reporting and production work also includes stories about economic development and tourism. Through her work at UPR, Aimee is familiar with the unique qualities and challenges that can be part of living in rural Utah. She is really good at bringing home the human aspect of what is happening. You will hear her share the basics of a story but with the added element of how decisions and discussions surrounding the topic could affect those living in her new community. That is her niche.”

Cobabe is slated to co-host the morning show and will present live newscasts throughout. She will also cut in with news briefs during the day and provide news updates on 97.7 FM, The Wolf and write for midutahradio.com.

Find the whole article at http://sanpetemessenger.com/2017/07/27/emmy-award-winning-reporter-named-as-news-director-at-mid-utah-radio/