Students from English were wishing for Harry’s Nimbus 2000 in this 2013 Quidditch game on the Quad. Broomsticks are harder to ride than one would think! The first “official” Quidditch game came out of a 5000-level medieval literature class.

It wasn’t field hockey or Aikido or Pilates. I had watched from my office window in Old Main as students on the Quad carried a mysterious piece of equipment, a staff of some kind. Now they were back for some kind of game.

The following week, the family dog served as pretext to observe the procedures from closer up. The game also involved various balls of different sizes. The dog and his person were equally intrigued.

Every so often there was a chaotic eruption of movement, the rules of which I could not make out. Students were running at high speed — chasing, catching, throwing and dodging balls. It was only when I saw three hoop goals erected at the end of the field that I finally understood: These students were playing Quidditch.

If you have been initiated into the world of Harry Potter, you know that Quidditch is a popular — and dangerous — sport played by wizards and witches flying high in the air on broomsticks. The imperturbable and resourceful Aggies down here on the Quad had replaced the magical sport’s most iconic piece of equipment, the broomsticks, with PVC pipes, which they held with one hand while they ran tirelessly up and down the grassy green.

After practice, I approached then team captain Cameron VomBaur and shared what little I could bring to the table. Besides my enthusiasm, there was my name. I am Professor McGonagill, much like Minerva McGonagall, the strict but fair head of Gryffindor house. It was McGonagall, Transfiguration teacher and Quidditch aficionado, who recruited Harry for the Gryffindor Quidditch team and gave him his first broom.

Back at my desk in Old Main, I did my homework. I learned that students at Middlebury College in Vermont were credited with inventing a real-life version of the sport. Quidditch played by Muggles (non-magical folk) resembles a combination of hockey, basketball, and dodgeball, with a refreshing dose of rugby and self-depreciating quixotism mixed in. An athletic close-contact sport, to be sure, but with a strict code and high ethics.

From the Page to the Pitch

Quidditch teams have sprung up all over the world. In the United States, during the summer months, there is Major League Quidditch, as well as a world championship. During the school year, university and community teams compete for national titles.

Like the fictional game, real-life Quidditch is played with seven players and five balls. Three chasers, wearing white headbands, try to score points by throwing the Quaffle (a repurposed volleyball) through the hoops. A Keeper, position signaled by a green headband, guards the three hoops to prevent that. Two Beaters (black headbands) are trying to “knock out” opponents with Bludgers, for which dodgeballs are used. And the Seeker, with a gold headband, tries to catch the enchanted Golden Snitch, an elusive walnut-sized ball with silver wings.

In Muggle Quidditch, the Snitch is a tennis ball, tucked into a yellow sock attached to the back of an impartial player’s waistband — another inventive way of overcoming the obstacles our muggle world presents.

As with many great movements, the exact beginnings of Quidditch at Utah State are shrouded in mystery. But there are a few names that figure prominently in the team’s Myth of Origin. Notably there was George Williams, a veteran Quidditch Keeper and head of a clan much like the Wizarding Weasleys. Also, Dakota Briggs, a famed Seeker, and Tya Johnson, History student and Beater of the first hour, laid the foundation for great things to come.

The other name that ought to be mentioned is that of Christine Cooper-Rompato, associate professor of English with an expertise in medieval literature and all things Hogwartsian.

By some “midwifery magic” of her own, Cooper-Rompato assisted the birth of Quidditch at Utah State in hitherto unsung ways and became the first and longest serving adviser and faculty contact for the team.

In fall 2014, the official Year One of Quidditch at USU, Utah State Quidditch became a registered university club. In 2015, I joined Cooper-Rompato as club adviser. In the five years since its inception, Utah State Quidditch has thrived. In fact, the team deserves a grade of “O” for “outstanding,” the highest grade in wizarding academia—followed by “E” (exceeds expectations), A (acceptable), P (poor), D (dreadful), and T (troll). The USU Quidditch Team is currently ranked first in the West, and recently won the Regional Championship.

On a cold Monday in February, three Quidditch players — Amber Zehner, Dru Smith, and Blake Rodman — meet me at the HUB and help me brush up on the latest. Last year, competitive USU Quidditch made the transition from University Club to Sports Club. The changeover offered obvious perks such as better access to athlete resources, allocation funds from Campus Recreation, and a professional trainer.

Sadly, as USU Quidditch moved from the Quad to Legacy Field, I lost the VIP view from my office window. And, just as I thought I was finally getting down my Professor McGonagall act, the team had no need any more of their old CHaSS mentors.

A sport for CHaSS to embrace

My children have always maintained that Old Main looks a lot like Hogwarts School of Witchcraft and Wizardry. (They also preferred the basement office I had at the beginning, (Old-)Mainly because they got a kick out of telling friends that their mother dwelled in “The Dungeons”— more adventurous that way, albeit more befitting to a Slytherin than a Gryffindor.)

I have come to think of Quidditch as an ideal sport for CHaSS. The brainchild of a literary author, it entered the “real word” via the side door of fictional writing and now plays an important role in many lives, emotionally and — as shown by the USU Quidditch Team — also physically. For all its tough athleticism, Quidditch is deeply humane and inclusive. It hones the social skills and, most importantly, it is about building community, bonding over something one loves, and the power of the imagination.

Professor Cooper-Rompato taught me that “Dumbledore” is an old word for “bumblebee,” another example of the many lovably whimsical details in Rowling’s book. Maybe we should take a leaf out of it and, in honor of Harry Potter’s 40th birthday next year, have a CHaSS Quidditch tournament on the Quad, complete with VIP seating in the stands and campus-wide broadcasting.

We also need a Trophy Room in Old Main. Here, we could display the numerous Quidditch awards, cups, and medals the USU Team has won. Maybe, we should have a speaking, moving (and laughing!) portrait of Christine Cooper-Rompato.

Suggestions for passwords to the Trophy Room should be sent to Natalie A. Smoot, Executive Assistant to the Dean, or anybody familiar with the spells that grant access to the Dean’s Office. 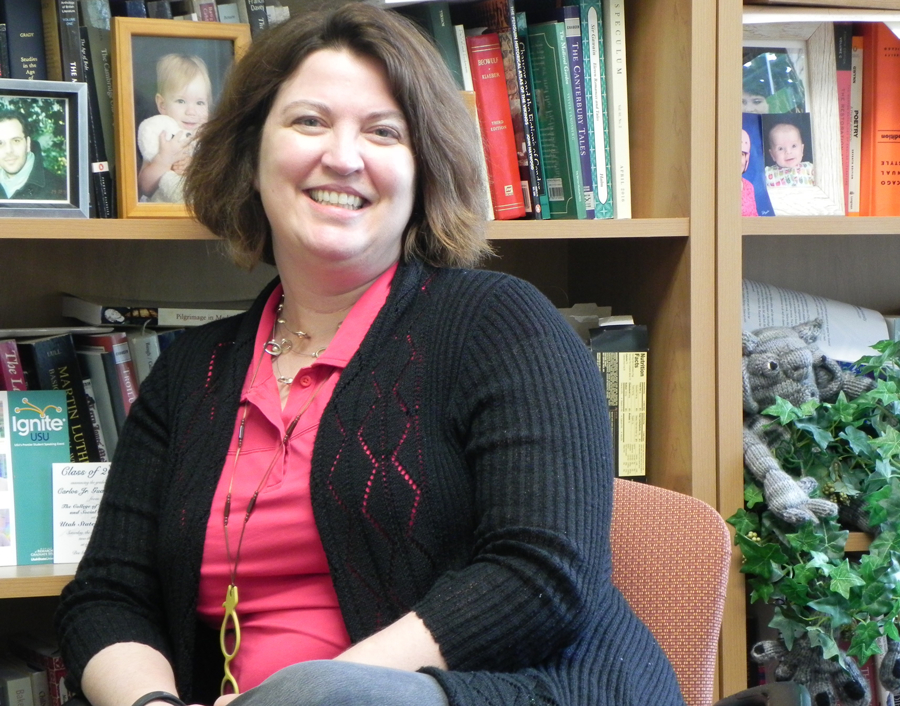 Quidditch at USU officially began in a 2013 5000-level English class on medieval literature taught by Christine Cooper-Rompato, associate professor of English. She brought brooms, balls and  hula hoops for the class activity that grew and grew, like Dudley’s tongue after eating toffee. 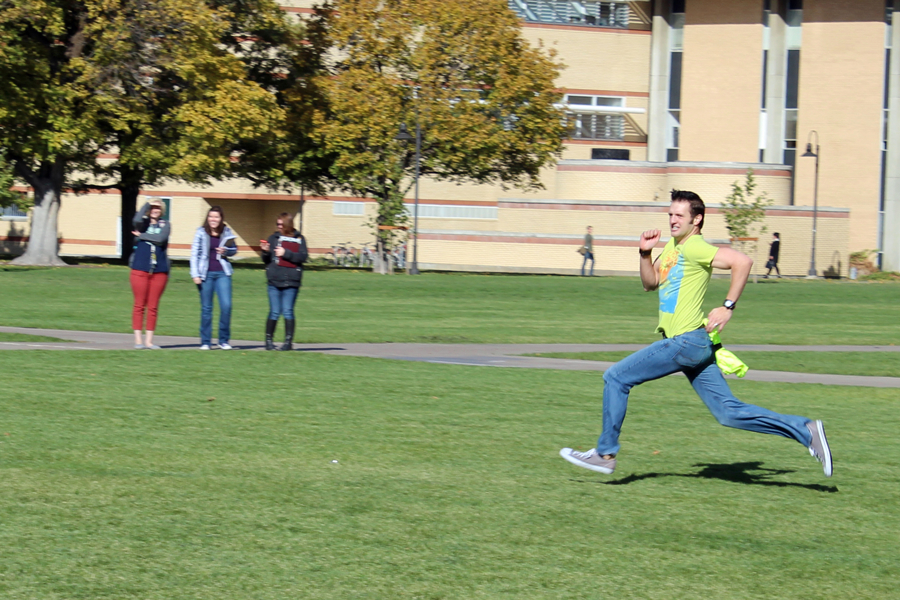 In muggle Quidditch the snitch is a neutral position, identified by the tennis ball and sock stuffed in a back pocket as played here by Jordan Thompsen.

Once a registered university club, Quidditch was “promoted” to be a new Club Sports team in 2017 and is now part of the university’s Campus Recreation Program. The team, seen above in spring 2019 practice, has moved from the Quad to Legacy Field and competes nationally. (Photo courtesy Doris McGonagill)