At what cost? JCOM professor lauded for putting lives ahead of headlines 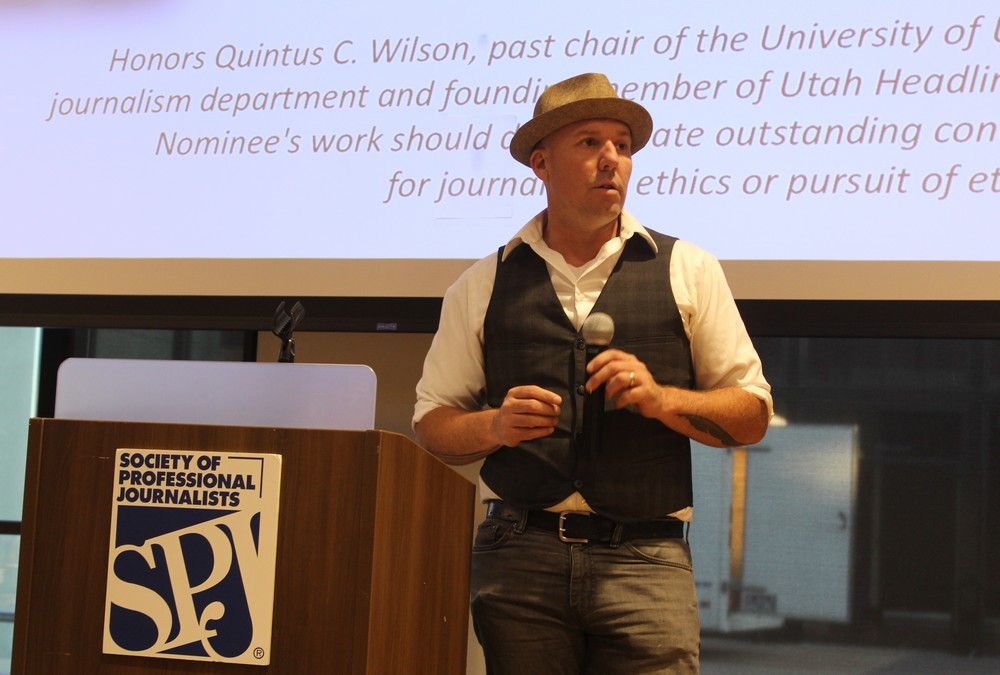 Matthew LaPlante, associate professor of journalism, explains the quandary that earned him the Quintus C. Wilson Ethics Award from the Utah chapter of the Society for Professional Journalists.

You’re a reporter talking to frightened and desperate Salvadoran parents who are sending their children into the unknown, away from a land that is awash in gang violence.

You tape record the many chilling details they provide of dark nights filled with the blasts of gunshot.

The killers may have no conscience. But this is where a reporter may pause. Wait, how ethical is it to report these chilling stories of people who, in retaliation for the interview, may be chased down by ruthless gangsters?

Is it humane to identify the locations of ordinary people?

After all, these sources never said you couldn’t. They never once told you to not write down their names, to not take photos of their children, to not report on their travel plans.

That was the dilemma faced by journalist Matthew LaPlante. How, exactly, do you get the side of the story from people who are afraid for their lives?

That LaPlante, an associate professor of journalism, made the ethical choice was confirmed in May when he received the Quintus C. Wilson Ethics Award from the Utah chapter of the Society for Professional Journalists.

In accepting the award, LaPlante explained that the honor also belonged to Carolina Pena, the Salvadoran college student who, as his “fixer,” became his guide and voice.

LaPlante’s reporting was published in a May 2017 Deseret News story. The headline reads, “With her daughter facing certain death in El Salvador, a mother had to make ‘a terrible choice.’”

The story tells of one mother forced into the harrowing decision to send her teenage daughter, who’d been targeted by members of a local gang after they mistakenly assumed she was a police informant, away on a migration journey, alone, to safer shores in the United States.

LaPlante and Pena spent time with many parents who were initially happy to talk with them. The question he found himself asking, he says, was, “How much responsibility do we have to say, ‘Hey, slow down. Have you thought about the consequences?’”

When warned that details of their lives and decision would appear in international media, many did indeed clam up.

As a result, he lost their powerful stories. “It was hard to see our sources go away, but it was the right thing to do,” he said. “We wanted to make sure we were doing our utmost to not take advantage of people’s generosity and speaking to us without giving them ample time to consider.”

LaPlante’s news-writing class (JCOM1300) is legendary for the clarity it provides to students in deciding if they want to be career reporters. One student echoed others when he wrote on ratemyprofessor.com, “Most stressful, knowledgeable and inspiring class of my college career.”

(Another student wrote on what was another common theme. LaPlante “comes off as a jerk, but stick it out and he will become your favorite teacher too.”)

So, in the field, LaPlante took the advice he shares in the classroom with future journalists: Anonymous sources can be helpful, but mostly unhelpful.

“I very rarely provide anonymity because the consequence if that is that people will take you less seriously,” he says. “And this is not a story I want anybody to take less seriously. We’re talking about human lives.”

This 2018 honor is actually the second time LaPlante has earned the ethics award. The first was awarded for a story that appeared on CNN, specifically for circumstances he and a photographer faced when they traveled to Ethiopia to write about ritual tribal infanticide. What, they asked themselves, would they do if they actually witnessed such a deadly ritual?

“We had to agree ahead of time that we weren’t going to hold one another responsible if our humanity overcame our journalistic responsibility in that moment,” he said.

Fortunately, the two journalists never faced that choice. But such “ethical quandaries” aren’t limited to troubled countries far from the United States, he says.

“I don’t remember a single day I worked in a newsroom when there wasn’t some reporter facing a pretty serious ethical quandary, because our code of ethics compels us to consider multiple factors,” he said.

“Any time we’re reporting a story, we want to balance the minimization of harm with the public’s right to know and the importance of seeking truth and reporting it.”

LaPlante is, typically, juggling a dozen projects, many of them related to one of his favored types of writing: science reporting. Scheduled for publication in April 2019 is his new book, “Superlative: The Biology of Extremes.” The book, he says, is “about what scientists are learning by studying record-setting organisms, like the world’s largest land mammal or the world’s fastest bird.”

The show, to be called “Undisciplined,” will air Friday mornings.

The premise, LaPlante says, is to bring together scientists from disparate disciplines and “force them to talk to each other and explain their research to each other.”

Read LaPlante’s Deseret News reporting on the plight of Salvadoran parents. (Opens in a new tab.)