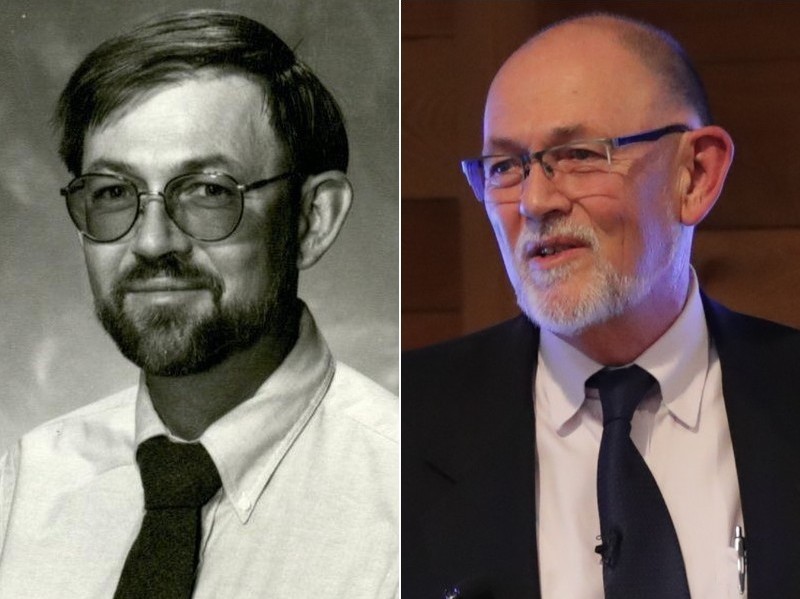 Dr. Norman Jones, professor of History (then and now) is retiring this semester but will continue in an emeritus role. Students and colleagues are invited to reconnect with him during two upcoming celebrations.

In 1978 – some 40 years ago – assistant professor Norm Jones stepped into Old Main on the Utah State University campus and prepared to teach his first history class.

He’d achieved his Ph.D. in history that same year from Cambridge University. But at heart he was that young man who’d attended College of Southern Idaho in Twin Falls and he earned his B.A. in history from Idaho State.

At the end of spring semester 2019, Professor Jones will retire from the classroom – and this big transition will be much more heralded. That student from Idaho now has an international reputation as a scholar of the Reformation who specializes in Tudor legal, constitutional and religious history. And as a teacher, he has four decades of testimonials from students.

In his emeritus capacity, Jones will continue to be active in research and intellectual life, so one can quibble about the definition of “retiring.” Still, the Department of History and the College of Humanities and Social Sciences are taking this opportunity to host two gatherings to celebrate his many achievements and allow his now-scattered students to reconnect with him.

Jones has been instrumental in building today’s Department of History. As department head for 18 years, for instance, he founded the Classics and Religious Studies programs. His colleague, Jamie Sanders, now interim head of the Department of English, puts it this way: "Norm Jones has guided and shaped the USU History Department for decades, while also working as one of the most published and respected scholars of Elizabethan-era history.”

The gatherings, he added, enable his colleagues and students “to honor his commitment and dedication to the History Department, our students, and the profession as a whole."

To celebrate and honor Jones’ career , former students are invited to reconnect with him during upcoming events: 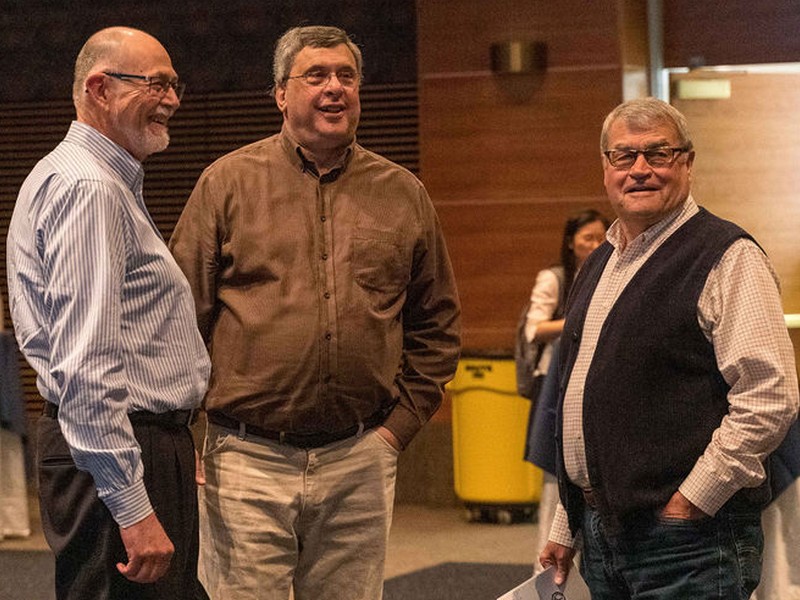 Norman Jones chats with two other influential history professors, Len Rosenband and Ross Peterson (both emeritus), at the 2019 CHaSS Awards celebration last month. Jones will join them in emeritus status as he retires at the end of spring semester.

Jones leaves the college with an example of the generosity and compassion his students have encountered. He’s established the Norm Jones Faculty Benefice to recognize and reward  history faculty members who are effective teacher-scholar-mentors. The benefice also includes a student fellowship program to recognize undergraduate and grad students.

Jones’ international research and acclaim is unmatched.  He’s the author of 11 books and more than 60 refereed journal articles. His most recent book is Governing by Virtue: The Management of Elizabeth England (Oxford University Press, 2015), while another book, Being Elizabethan: Understanding Shakespeare’s Neighbors, is due this year from Wiley/Blackwell.

He’s also held a lifelong passion in improving the teaching of history. At USU, he is a former chair of the President’s Task Force on Curricular Integration and, on a state level, provided years of service in many capacities to the Utah Board of Regents.

English professor Steve Shively offers a description of Jones likely shared by many colleagues and students. “I love oxymorons,” said Shively. “So I’ll just say that Norm is a model of calm energy.”

The many former students who have offered their appreciation for Jones in recent months focused more on the professor’s influence. Here’s a sampling:

“Norm is headed out, but stops to talk in the hallway for 20 minutes, hat on, always making time for others.” – Michael Torrens

“I met Norm my first week as an undergraduate at USU. He welcomed me into the major and we gossiped about my high school teachers. There could have been no better emissary for the history department, or for history as a discipline, than Norm.” – Christopher Hodson

“I worked with Dr. Jones during both my undergraduate and graduate degrees. Despite his MANY students, he took the time to help me work through my school and career plans and was a huge part of why I chose to become a teacher. He always encouraged me to follow my passions, find my own answers, and become better than I was before.” – Alicia Leitch