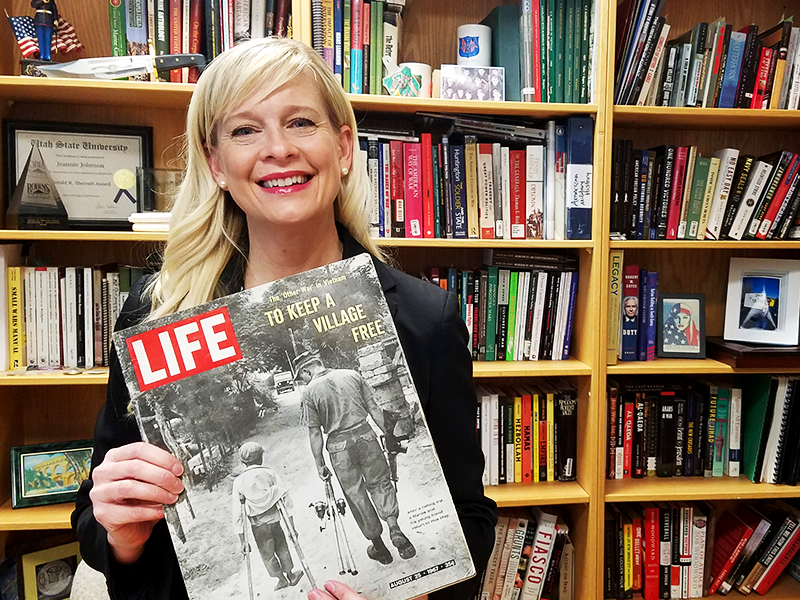 Political Science assistant professor Jeannie Johnson holds an issue of  Life magazine circa 1965 that features a cover story about the Marine CAPs program. Johnson relates the history of the Marines in a new book, "The Marines, Counterinsurgency and Strategic Culture." The magazine's cover text summarizes the CAP mission: To keep a village free.

Tim Duffie is a hero. That’s according to political scientist Jeannie Johnson, and she doesn’t throw that term around lightly.

As evidence, she relates this story: During the Vietnam War, Duffie was a Marine stationed in a small Vietnamese village rather than in a line unit. He was part of an experiment tasked with “defending the village from the inside out,” Johnson said.

One day, Duffie made his regular stop at a small corner market to buy a Coke. When he entered, two officers from the South Vietnamese army had the teenaged daughter of the store

“Tim didn’t think twice about it,” Johnson says. “He and another Marine launched on those officers, picked them up, chucked them out the door, had them on the ground, threatened them with their lives and then marched them out of town.”

Somehow, Johnson is “happy to report,” the paperwork for the resulting court martial (for assaulting a superior officer) was mislaid.

To this day, a half century later, Johnson says, “That village and that young girl in particular hold him in  the highest esteem.”

Johnson, an assistant professor of Political Science, describes Duffie’s company, the Combined Action Platoon (CAP), in a new scholarly book. CAPs is a chapter of Marine history little known by the public, which was then enthralled with evening news filmstrips of flame and guns.

In The Marines, Counterinsurgency and Strategic Culture (Georgetown University Press), Johnson explores the ideals, culture, peculiar mindset and history of the U.S. Marines Corps, beginning in 1915 and continuing through the Iraq War. She’s researched “lessons learned on the battlefield,” particularly the Corps’ strategy of counterinsurgency — the art of protecting a population from terrorists and guerrillas. 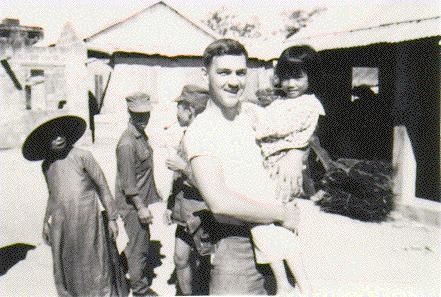 Marine Lance Corporal Tim Duffie circa 1967 in the Vietnamese hamlet of Phuoc My. His story is among many included in a new history of the U.S. Marine Corps highlighting the Combined Action Company. The CAP program embedded Marines in local villages to better protect the residents. Duffie is a native of Alexandria, Va. Photo courtesy capmarine.com

As a particularly timely and intriguing flourish, the book contains a forward by Marine Gen. Jim Mattis. Mattis served as commander of U.S. Central Command (CENTCOM) from 2010 to 2012, overseeing the conflict in Afghanistan, Syria and Yemen. He was recalled to federal work in 2017, when he was named U.S. Secretary of Defense, a position he resigned early this year.

So, here is Johnson’s studious, thoughtful assessment of these warriors: “They’re rogues,” she said, “lovable, terrible rogues. They love themselves. They deeply love their service. They are unapologetic about who they are. They’ve been absolutely steady entertainment over 10 years of research.”

But in the 1960s the idea of embedding Marines in poor villages was seen as far out. The CAP Marines, said Johnson, were trained to “patrol and guard the villages from the Viet Cong. They learned local customs, ate on the local economy, and knew every tree and twig and water buffalo in the entire village.”

The result was they “developed a sixth sense,” she said. “They could tell when the VC had been through without any villager having to utter a word because things in their village had shifted.”

And, in what Johnson describes as “the height of irony,” CAP Marines sometimes protected villagers from their fellow fighters. “These Marines would often stand bodily in front of  U.S. Army trucks and say, ‘You don’t come in here and mess with my villagers’,” she said. 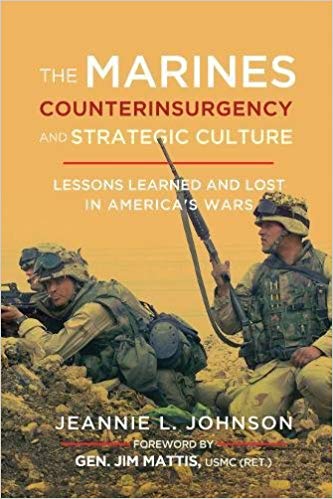 The CAP Marines made up just a sliver of the Marine presence in Vietnam, Johnson said. Of the 80,000 Marines in Vietnam at any given time, only 3 percent, some 2,000 men, were in the Combined Action Platoons.

Westmoreland “thought it was exactly the wrong way to go about fighting this war,” says Johnson. “He publicly derided Marines in the CAP program, saying they weren’t real men fighting in the real way.”

The program and its ideology languished in the years following the Vietnam War. This was largely, Johnson believes, because of the America’s own cowboy creed. “Some of these lessons learned, even though they were very effective, just didn’t synch with the way we like to fight as Americans,” she said.

The lessons, however, were recalled by Gen. Mattis when he was a commander in the Middle Eastern theater. Mattis himself joined the Marines in 1969.

“The CAP Marines forged a means of fighting counterinsurgency that are the best practices we eventually adopted after learning many of the same lessons all over again in Iraq,” said Johnson. Indeed, many CAP lessons are found in the Small Unit Leaders’ Guide to Counterinsurgency, written under Mattis in 2006.

Johnson, a former intelligence officer with the CIA, is an expert on American intelligence agencies. She’s also a subject matter expert in her position on the Pentagon’s Close Combat Lethality Task Force. Her role, she said, is “to give input on the sort of cultural training that would be most beneficial to U.S. Army and Marine infantries across the board.”

The techniques are being adopted by other branches. She cites this example from her role of official observer of one U.S. Navy SEAL training class.

In a mock village set-up, the special-forces trainees “have to interact with six different cultures and do so successfully or they can’t pass the class,” Johnson said. “They have to do negotiations, work with interpreters, and learn a wide range of skills sets that are quite alien in the beginning to guys who mostly want to shoot thing, kick in doors and blow things up.”

For more information about the Vietnam War-era program, visit http://www.capmarine.com/.

At this site, Tim Duffie also gives a first-person recounting of his history with CAP. He also relates how he returned to Vietnam in 1996 to reconnect with the young woman he protected and her family