Spanish prof honored with the Peak Award for his mentorship 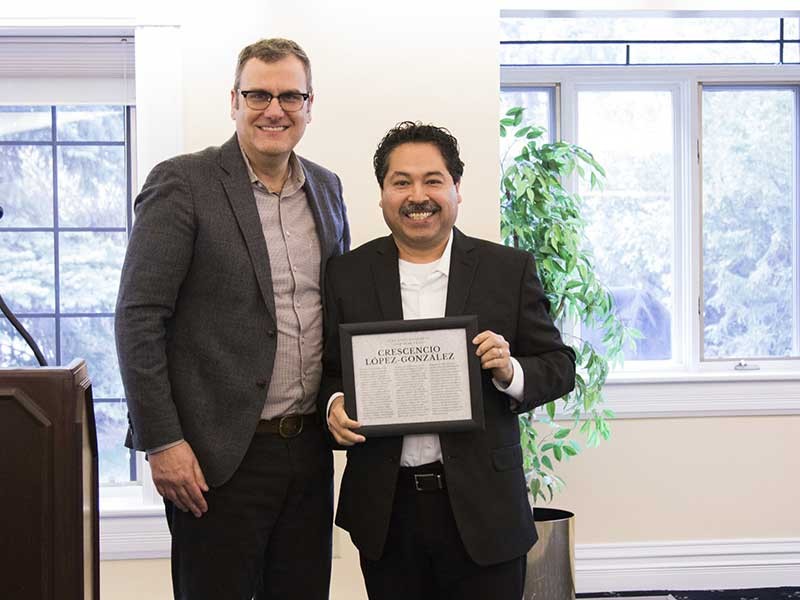 Scott Bates, associate dean of the Office of Research and Graduate Studies (left), presents Crescencio López-González with the Peak Prize for Undergraduate Research Faculty Mentor of the Year at the Faculty Mentor Breakfast.

Crescencio López-González is the 2018 recipient of the Peak Prize for Undergraduate Research Faculty Mentor of the year at Utah State University. Chosen from a pool of outstanding mentors from each college, López-González, an assistant professor of Latinx literature and culture, was given this honor to commemorate his exceptional mentorship of undergraduate students conducting their own research.

Scott Bates, associate dean of the Office of Research and Graduate Studies, presented López-González with the award at the Faculty Mentor Breakfast April 11, 2018.
In March, López-González was named by the College of Humanities and Social Sciences as its Undergraduate Research Mentor for 2018.

A native of Mexico, López-González has worked tirelessly throughout his career for the advancement of the Latinx community. His multiple publications and presentations reflect this, with topics ranging from literary analyses to examinations of urban conditions in Latinx communities.

In his classroom, López-González encourages his students to become involved, both in research and in the community. Through his guidance, his students have had the opportunity to receive funding and attended conferences to present their research. Just this year, López-González has had six students accepted to conferences across the United States. His students admire his passion and dedication for their research and talk frequently about how his mentorship has affected their lives.

“Professor López-González is an exceptional member of our faculty,” said Mark McLellan, vice president for research and dean of graduate studies at Utah State. “He devotes so much of his time to our students, and they have undoubtedly been able to see the benefits of his energy and passion for research.”

Outside of research, López-González has taken part in numerous student organizations on campus. Among these are the Undergraduate Spanish Club, the Honors Program, and the Latinx Creative Society, the latter of which works to document the Latinx experience in Cache Valley. The group recently released a film called “Logan iSomos tus Vecinos!” or “Logan, We are Your Neighbors!” a film directed by López-González. The documentary details the lives of Latinx people in Cache Valley, from new immigrants to Logan-born residents. The film was originally screened in October, with another viewing at Logan’s recent annual Martin Luther King Day celebrations.

López-González’s career has a history of land-grant universities leading up to his time at Utah State. With a bachelor’s in Hispanic literature from the University of California-Davis and his doctorate in urban Latina and Latino literature and culture from the University of Arizona, he has developed a great appreciation for the contributions to research that land-grant institutions can offer. In his time at Utah State, López-González has guided over 50 students to present at conferences at the local, state, national and international levels.

López-González previously taught at Cosumnes River College, Pima Community College and the University of Arizona before coming to Utah State in 2012. He jumped straight into research within USU’s Department of Languages, Philosophy and Communication Studies, drawing on a multitude of disciplines, from sociology to cultural geography, to guide his studies. Some of his specialties include urban U.S. Latinx literature and culture, Mexican and Mexican-American literature and culture and Hispanic and Latinx film studies. Much of his research focuses on how culture affects the Latinx community.

A member of the Logan Library Advisory Council and collaborator for The Block Art & Film Festival, López-González’s influence is felt in Logan outside of the classroom. In addition to his scholarly work, López-González has twice published in an advice column for the Latinx community in Salinas, Calif.

“Professor López-González has had tremendous impact on the university and the community,” said McLellan. “He truly deserves the title of undergraduate research faculty mentor of the year.”

López-González was honored at the Faculty Mentor Breakfast, an event held during USU’s Research Week to recognize the university’s Graduate and Undergraduate Mentors of the year. He was joined by other nominees from each college to recognize their achievements. For more information about the awardees, visit rgsawards.usu.edu. To learn more about Research Week, visit rw.usu.edu.