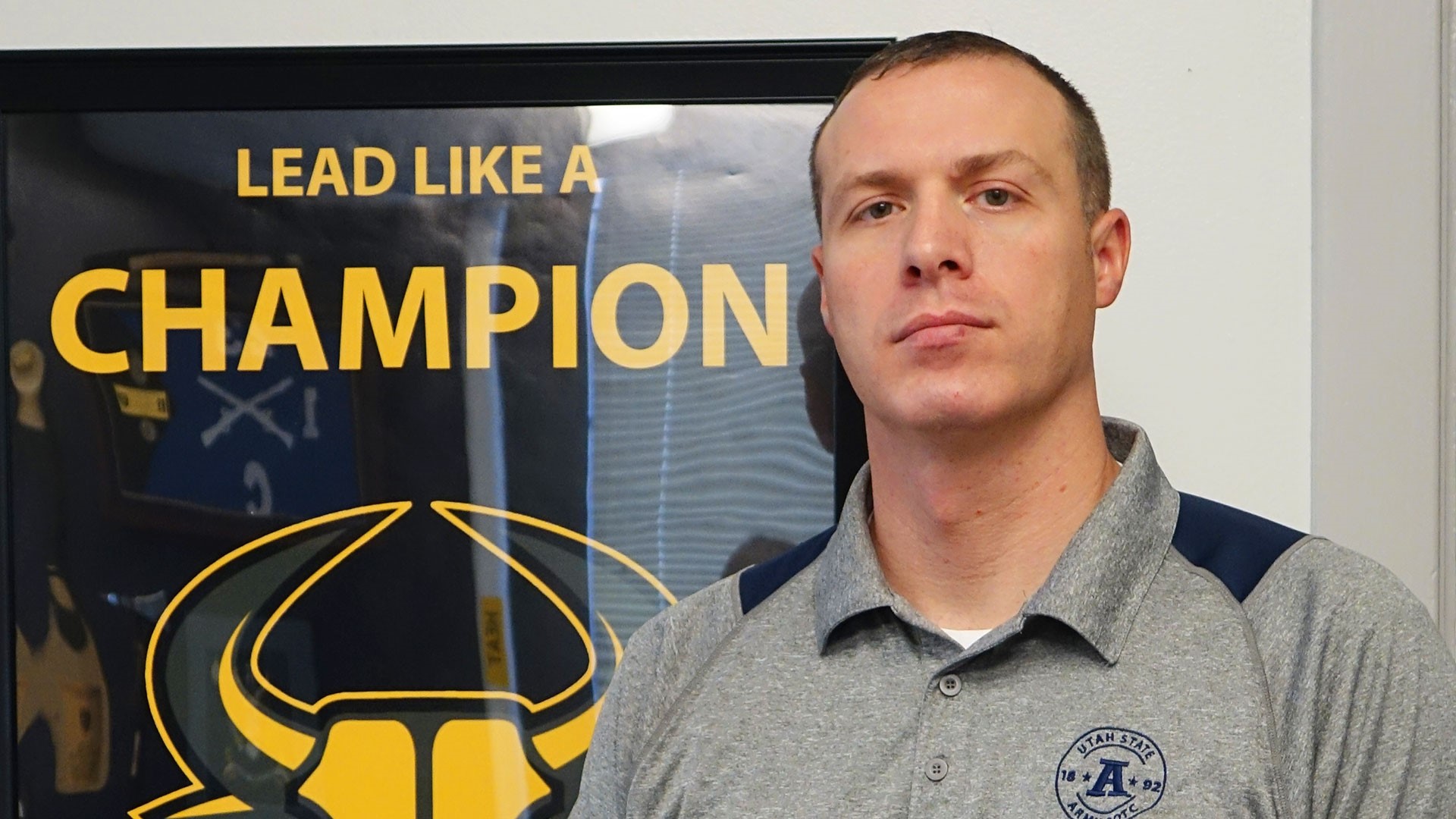 When Klint Kuhlman joined the U.S. Army in 1997 as a high school senior, the world was fairly tranquil. Russia had shed its Soviet Union-era restrictions. Desert Storm was already history, and the shattering attacks of 9/11 were still years away.

Now that he’s in a position to shape the next generation of Army leaders, Major Kuhlman considers our more dangerous and cynical world of 2018.

“Students who enlist now understand there is a higher probability they will be deployed and be called upon by the nation to go to war,” said Kuhlman, the new department head of Military Science and officer in charge for the U.S. Army ROTC at Utah State University.

“They understand they’re joining an army at war doing its part to support the security of the United States against active enemies,” he said. “They understand that we’re currently fighting in two different conflicts and that we are winding down a global war on terrorism. There’s something to be said for that. ”

The Army ROTC is one of two such programs on the Logan campus. It shares the World War II-era Military Science building with the U.S. Air Force ROTC. Both Military Science and Aerospace Studies are in the College of Humanities and Social Sciences.

Kuhlman says that we, as a nation, ask more of today’s soldiers than when Kuhlman was a new recruit. Not only are soldiers trained to be warriors, he said, they must also act as ambassadors. “One minute you may be fighting an enemy or insurgent force, and the next one you may be caring for a local population through medical support or security.”

In fact, that’s why Kuhlman says he’s pleased that his program of training Army officers is part of a college focused on the humanities. At first glance, CHaSS “may not be the best fit for military aspects,” he said. “But if you at it look through the lens of leadership, I’m in the business of producing leaders, and that’s a very people-focused profession.”

Kuhlman is a native of the Finger Lakes region of New York State. The high-school-aged Kuhlman chose the Army infantry, he says now, because “it’s the world’s premier fighting force.”

“My thing was, ‘Everything supports the infantry,’” he says. As for the dangers of battlefields, “That wasn’t a concern of anyone, certainly not me.”

World events soon intervened. Kuhlman was a cadet at West Point Military Academy when terrorists attacked the World Trade Centers in 2001. As a brand-new officer — a 2nd lieutenant — his first assignment was to command a National Guard infantry battalion from Fort Lewis, Wash., as it deployed to Iraq. Kuhlman and his troops arrived just three months after the December 2003 fall of Saddam Hussein.

In Iraq, Kuhlman patrolled Baghdad’s Green Zone, performing “patrols, raids and operations to support security there.” During the country’s first free election, he adds, “I remember patrolling just to ensure there was security so Iraqi citizens felt safe as they cast their votes at polling locations.”

In Utah, the infantry is not a common choice of a path for his nearly 100 ROTC cadets. Many of them remain in the state to serve in the Utah National Guard, which doesn’t have an infantry unit and specializes instead on field artillery, engineering and intelligence work. (The nearest Army ROTC with an infantry focus is in Montana.) One of the 12 cadets slated to be commissioned as officers this spring, however, will join the infantry branch as an intelligence officer.

Kuhlman, that young cadet who believed the infantry to be the center of everything, has grown to understand, he says now, that “every branch of service has a place in the arsenal.”

But regardless of computers and advanced air power, he says, there will “never be a time” when the foot soldier isn’t needed.

Ground forces, he says, “interact with populations you’re trying to secure or trying to defeat,” citing the increasing phenomenon of terrorists hiding among a country’s residents.

“A drone or some type of technological system is not going to be able to do that,” he said. “It can only be done by people.”

Kuhlman paraphrases Korean War historian T.R. Fehrenbach to explain, “You can fly over a nation, you can pulverize or bomb it; but if you want to own it or safeguard or create a future for it, you have to do it the way the Roman legions did — by putting your young men and women in the mud.”

Both the Army and Air Force ROTCs accept freshmen and sophomores. Following the three-year leadership program, the cadets will graduate with the degree of their choice and, as newly minted officers, accept roles in active duty or with National Guard or reserve units.

Students can take ROTC leadership courses without any future commitment, Kuhlman said. “I’d like to see students, whether they’re curious or committed, to be  a part of this program. Everyone has something to contribute.”