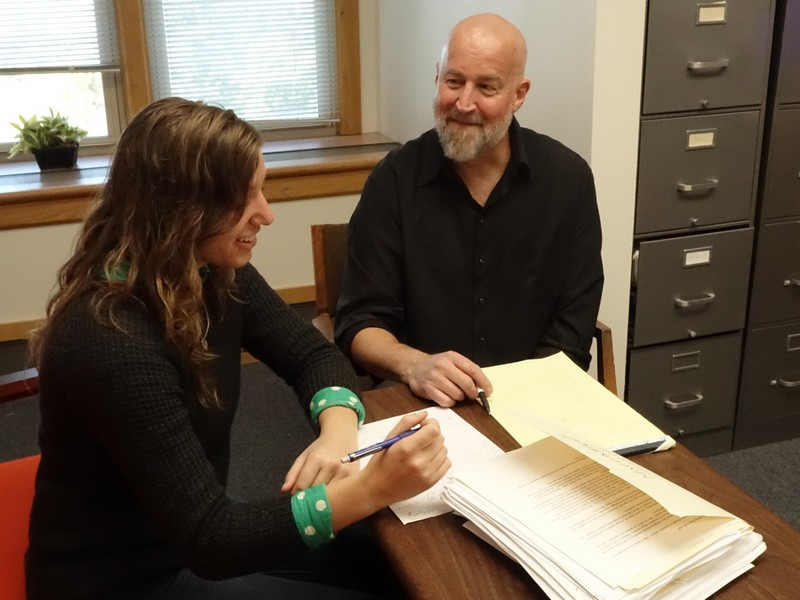 Dr. John Seiter, professor of Communication Studies, works with a student in this 2017 photo. Seiter has been named a Distinguished Professor for the College of Humanities and Social Sciences.

Dr. John Seiter, a professor of Communication Studies, has been named a Distinguished Professor of the College of Humanities and Social Sciences.

This honorary title is given to a faculty member who has performed “at a very high level in all areas of a faculty member’s responsibilities – teaching, research and service,” said Dean Joseph Ward.

Dr. Seiter does all that with a ready smile. “He exemplifies the scholar-teacher that all of us aspire to be,” said Ward. “His record at Utah State is remarkable for its consistency as well as its overall productivity.”

Seiter joined USU’s Humanities faculty in 1994, gaining full professorship in 2006 in the Department of Languages, Philosophy and Communication Studies. He teaches a range of communication courses from Interpersonal Communication to graduate-level Advanced Persuasion.

LPCS department head Bradford Hall said he’s pleased to have Seiter in the department, explaining that he is “a caring mentor for both the younger faculty and our students.”

Seiter, he adds, is “consistent and productive in his research, effective and creative in his teaching, and always willing to do more than his share of service.”

A native of Garden Grove, Calif., Seiter earned his Ph.D. in Communication Arts and Sciences from the University of California, Los Angeles. His master and bachelor’s degrees, both in Speech Communication, are from California State University Fullerton.

Seiter is widely known as an expert on the subjects of persuasion and social influence, the hospitality industry and detection of deception. This year saw the sixth edition of the textbook, Persuasion: Social Influence and Compliance Gaining (2018, Routledge), co-authored by Robert H. Gass of California State University, Fullerton. The book explores the persuasion techniques of such grassroots groups as the Tea Party and Occupy Wall Street, as well as the influence of today’s social media.

Seiter is also known for his focus on what is often an underappreciated relationship: that of a restaurant customer and the wait staff. In just one example, he published a 2015 article in the Journal of Hospitality Marketing & Management titled “The Effect of Mutual Introductions and Addressing Customers by Name on Tipping Behavior in Restaurants.”

In online ratings, his students describe him as a funny and engaging teacher who expects much from those in his classes. “You have to work your butt off,” said one reviewer, “but he has a lot of good insights into life and good advice.”

And there’s another thing for which Seiter is known. As one student explained, “He probably talks about NutRageous candy bars every day of his life.”

Seiter will be recognized at the CHaSS Awards Ceremony next March.