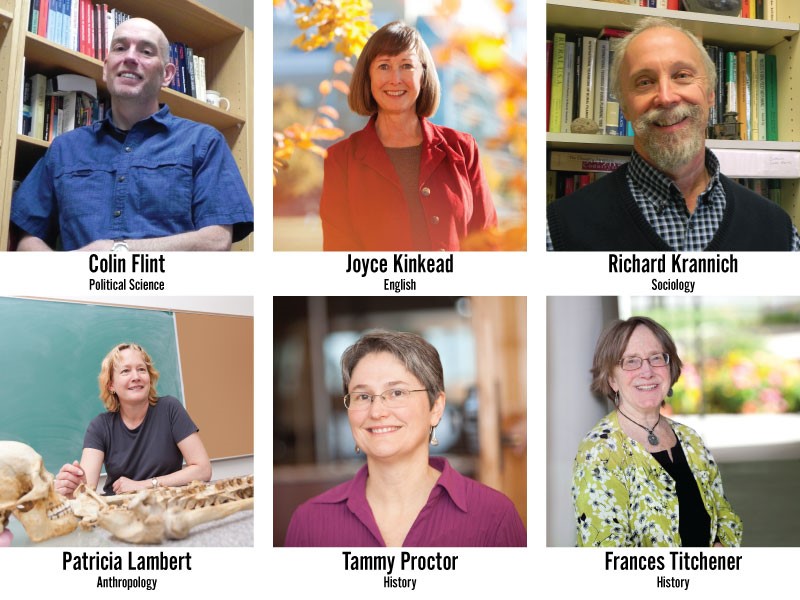 Dec. 7, 2017 — In what he hopes will be a new tradition in the College of Humanities and Social Sciences, Dean Joseph Ward has announced that six members of the college faculty will be granted the honorary title of Distinguished Professor.

The award is “a way of recognizing that these are colleagues who have continued to perform at a very high level in all areas of a faculty member’s responsibilities – teaching, research and service ,” he said.

The Distinguished Professor title is an award, not a promotion, for senior faculty members who continue to work fulltime, he said.

Ward said he was reluctant to limit the number of awardees “because we have many more than six who are highly professional and accomplished.”

“This is the beginning,” he added, “of what we hope will grow into a longer-term program to recognize faculty,” he added.

Colin Flint earned the rank of Professor of Geography at the University of Illinois at Urbana-Champaign in 2011, and he joined the USU faculty as a Professor of Political Science in 2013.  He has been the Director of the International Studies Major since 2015.  He has been the editor ofGeopoliticssince 2014.

Joyce Kinkead joined the USU faculty in 1982 and achieved the rank of Professor of English in 1990. She served as the Associate Vice President for Research at USU from 2000-2011. She was named Professor of the Year for Utah by CASE and Carnegie Foundation in 2013.

Richard Krannich  joined the USU faculty in 1980 and earned the rank of Professor of Sociology in 1990. He served as the department head from 2002-2011, and he has directed the Center for Society, Economy and the Environment at USU since 2012.

Patricia Lambert joined the USU faculty in 1996 and achieved the rank of Professor of Anthropology in 2007. She served as the Associate Dean of Research and Graduate Studies for the College of Humanities and Social Sciences from 2010-2016. She was the Anthropology Program Director from 2004-2009.

Frances Titchener joined the USU faculty in 1987 and achieved the rank of Professor of History and Classics in 2002.  She has been the secretary and co-editor of Ploutarchos, for the International Plutarch Society, since 1987.  She has directed the USU Undergraduate Teaching Fellows program since 2014.

Along with a committee of senior, tenured members of the college’s faculty, Ward said he selected these individuals from among a very strong group of applicants.  "They are noteworthy because of their continuing high level of productivity in all areas of a faculty member’s responsibility," he said.