Professor's life work has been safeguarding, advocating for victims of abuse 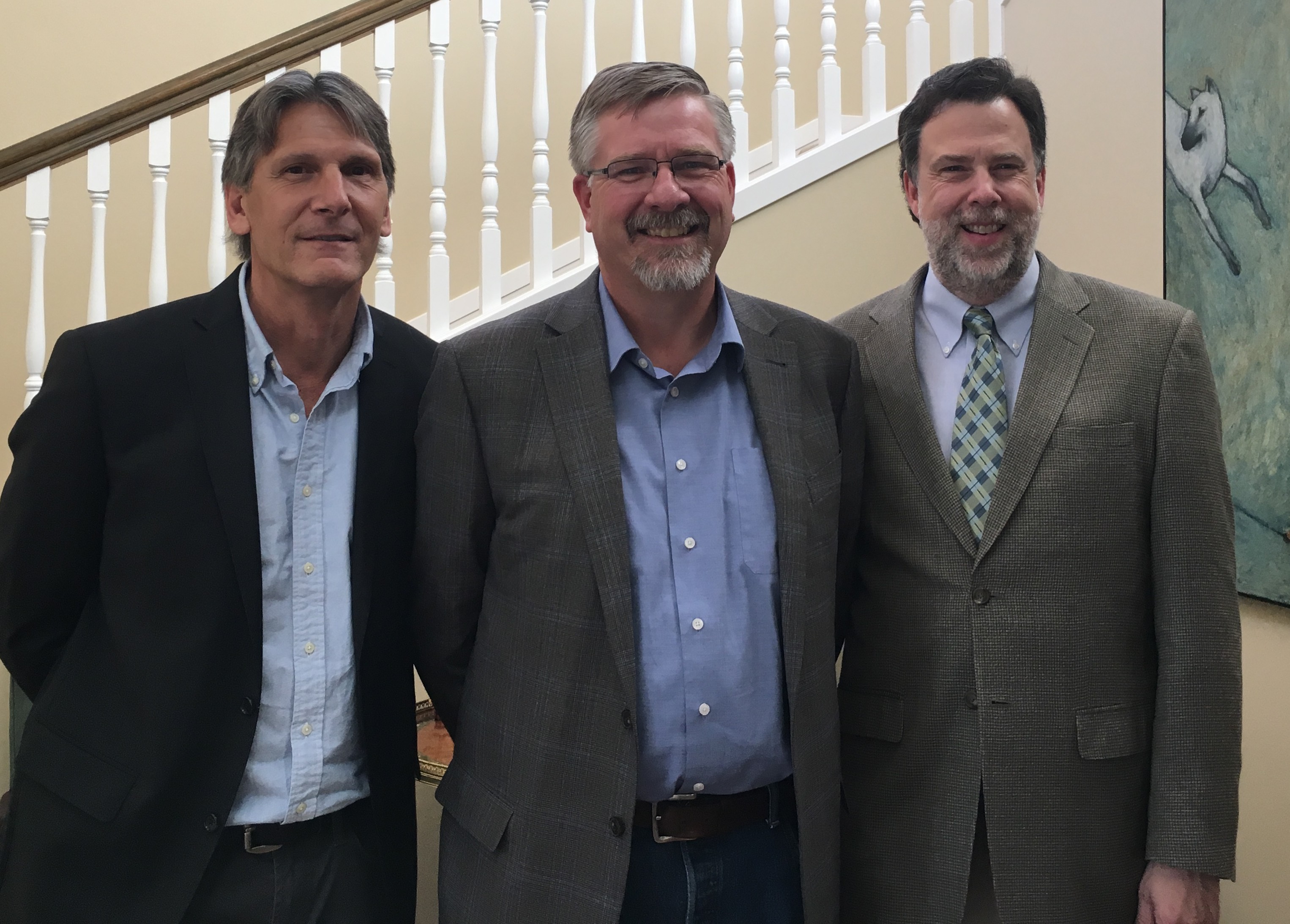 Derrik Tollefson (center) was recognized for his promotion to the rank of professor during his Inaugural Professor Lecture presentation. With him are USU First Gentleman John Cockett and Joseph Ward, dean of the College of Humanities and Social Sciences.

It’s always been about the children.

Derrik Tollefson’s life work is finding ways to protect vulnerable youngsters, strengthen their families and develop treatment for those who perpetrate abuse.

His resolution began when he was a Utah State University undergraduate studying social work in the early 1990s. And now, as head of the Department of Sociology, Social Work and Anthropology, he teaches others to do the same.

More than 20 years since his 1994 commencement, social work remains his passion, he told family, colleagues and friends who gathered recently to commend Tollefson for his promotion to professor.

In his Inaugural Lecture, Tollefson related what host Mark McLellan, vice president for research and dean of graduate studies, was later to describe as a “wonderful journey.” The lecture series, traditionally held at the USU president’s home, celebrates and acknowledges a faculty member’s advancement to full professor. Such a promotion, said McLellan, is “the pinnacle of an academic career.”

Tollefson, a licensed and practicing social worker who holds a Ph.D. in social work, has been instrumental for two decades in driving Utah’s increasing awareness of family violence and the best practices for ameliorating it.

Yet, there’s been one familiar thread through such milestones as founding the Utah Association for Domestic Violence Treatment, creating USU’s master’s of social work program and expanding it statewide: his threads. For Tollefson, it’s always cowboy boots and a tie-less shirt and blazer.

Tollefson says he’s “a cowboy at heart,” a lifestyle he practiced and near-perfected while in his former position as associate dean at USU Uintah Basin in Vernal. And, during the Inaugural presentation, an anecdote about Tollefson retrieving a calf from an irrigation ditch prompted this reaction from McLellan: “Well, Derrik, we’ve seen a whole new side of you.”

Tollefson’s professional side, though, began with his first field training — required for his social work degree — at the Vernal office of the Utah Division of Child and Family Services (DCFS). After detouring to the University of Denver to earn a master’s degree, he returned to Utah’s DCFS to create a domestic violence offender treatment program.

It was a time, he recalls, of “a lot of energy going around,” thanks to the passage of the Violence Against Women Act of 1994.

Since the 1970s, grass-root agencies in Utah had provided shelters for battered women. This was the among the first programs, however, to address the question of “what do we do with men who are abusing their domestic partners,” said Tollefson.

“It was all brand-new territory in terms of taking offenders seriously and providing treatment,” he said. More importantly, he added, it was the first time the state “put financial resources behind” those efforts.

“We were breaking new ground,” he says now.

Then he adds, “We had no idea what we were doing.” To remedy that, Tollefson began researching what treatment methods worked, and why. His follow-up dissertation at the University of Utah was titled, “Factors Associated with Batterer Treatment Success and Failure.”

“This was an effort to try and create a knowledge base around who’s coming to these programs, what are their characteristics and how are they doing in treatment — are they finishing or not?” he said.

Twenty years later, the issue is still being debated by professionals nationwide.

Regarding the effectiveness of treatment programs, he added, “We’re still digging deeper and pulling that question apart.”

Another open question in the family violence field is whether abused children thrive better in foster homes or by remaining with their families while receiving services. Tollefson’s continuing work on that issue resulted in a partnership between the University of Utah, USU and Utah’s DCFS, funded by a $500,000 grant from the U.S.  Children’s Bureau.

The 2005 grant funded $10,000 stipends for undergraduate social work students who committed to work for DCFS after graduation. The program targeted social work students because they are shown to have the longest careers as child-welfare workers. According to Tollefson, the program, which has morphed into an ongoing partnership between USU  and DCFS, has been widely used by USU students.

Working with USU to implement the grant actually prompted Tollefson’s move to USU in 2007. He settled in as the MSW program director and an associate professor at the Vernal campus. In 2016, named as the new SSWA head, he moved his family to Wellsville and USU, where three of his four children attend classes.

While on the Vernal campus, he focused his attention on the eight-year process of creating a MSW program that offers a full-time, two-year program as well as a three-year part-time program for students who hold down full-time jobs.

Today, the program is thriving in Logan and at regional campuses across the state, this year seeing a record-breaking number of applicants. His long-time colleague in managing the MSW program is Susan Egbert, coordinator for the state-wide part-time MSW program. Egbert is a clinical associate professor of social work at the USU Kaysville Center.

He credits such mentors as social work professors Diane Galloway-Graham and Terry Peak, who since Tollefson’s days as a student have been the framers and guardians of USU’s social work program.

Tollefson has also devoted much of his scholarly focus on integrating mindfulness into domestic violence treatment programs. In addition to workshops and other presentations, Tollefson has described the program in the article “A Mind-Body Bridging Treatment Program for Domestic Violence Offenders: Program Overview and Evaluation Results,” published in the Journal of Family Violence.

Over his years at USU and as a professional focused on family violence, Tollefson has produced a tremendous amount of research and published work on the gamut of family violence issues.