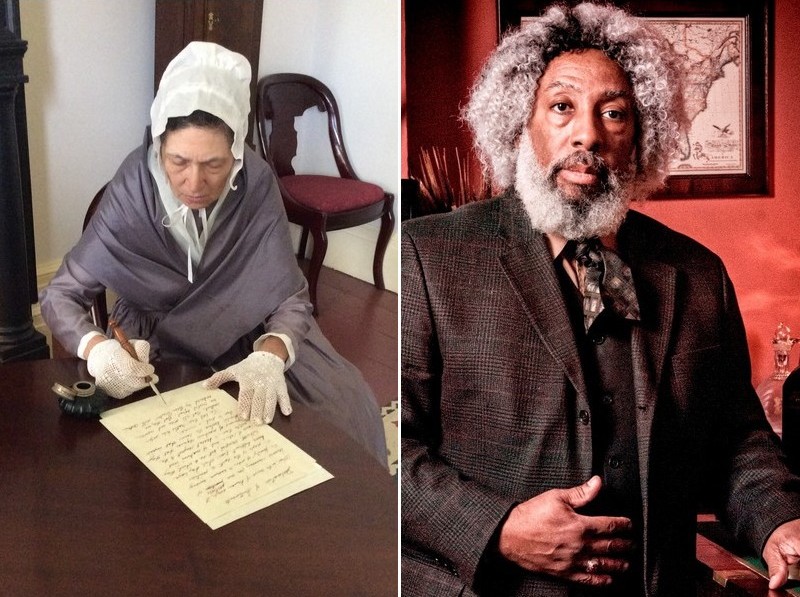 'Living historians' will portray two larger-than-life persons from the suffrage/abolitionist movement of the 1800s: Orator Frederick Douglass and suffragist Lucretia Mott. The free and public event, "Forward Out of Darkness: A Conversation with Frederick Douglass and Lucretia Mott," will begin at 7 p.m., Monday, June 10, in the Eccles Conference Center on the USU campus.

Don’t think of them as reenactors. They call themselves “living historians.” That’s because history is indeed alive. And it repeats.

Nineteenth-century abolitionist Frederick Douglass and suffrage activist Lucretia Mott (as depicted by Nathan Richardson and Renée-Noelle Felice) will have a conversation with Cache Valley residents on Monday, June 10, on the Utah State University campus.

If you’re up on today’s headlines, their insights about the rights of oppressed groups won’t seem that out of date, says Cathy Bullock, a Journalism and Communication professor and an organizer of the event.

“Forward Out of Darkness: A Conversation with Frederick Douglass and Lucretia Mott” begins at 7 p.m. June 10 in the Eccles Conference Center, room 216. It is free and open to the public.

This is a rare opportunity to ask abolitionist Douglass (1818-1895) about his journey from escaped slave to national anti-slavery activist and advocate for broad voting rights, or to quiz the Quaker orator Mott (1793-1880) about her lifelong quest to gain women a larger place in society. (Unfortunately, Mott died well before the 19th Amendment, which gave women the vote, was ratified in 1920.)

“This public event is going to be something special,” said Bullock. While in character, “The historians will start conversing with each other and eventually invite the audience to ask questions. It will be tailored to the audience. I can’t wait to see them in action!”

The event is sponsored by the Mountain West Center for Regional Studies in the College of Humanities and Social Sciences, as part of its annual Bennion Teachers’ Workshop. Each year, the workshop for public school and higher education teachers focuses on a theme related to democracy. During the day, participating educators themselves will “study past suffrage struggles within the context of today’s struggles for voting rights and women’s rights and consider how to teach this rich history in their own classrooms,” said Evelyn Funda, director of the Mountain West Center. Then, says Funda,  the Mountain West Center is sponsoring a public event on Monday evening, June 10, in conjunction with the workshop’s spotlight on “Gender, Media and Suffrage in the United States.”

This event and the Bennion workshop are part of a statewide effort to commemorate the centennial of the 19th Amendment. 2020 will see a number of such events happening in the state. (Utahns can be proud that Utah Territory gave women the vote in 1870, though the right was revoked on a federal level in 1887 and not restore until the 1920.)

At the June 10 event Richardson, of Suffolk, Va., and Felice, of Syracuse, N.Y., will portray the early civil-rights heroes.

Richardson is a performance poet who’s taken the Frederick Douglass Speaking Tour nationwide for five years. He “captures completely the physical and spiritual essence of the former slave, writer, orator, and abolitionist,” according to his site.

Felice has been a living historian for 20 years, often portraying Mott, an organizer, along with fellow suffragist Elizabeth Cady Stanton, of the 1848 Seneca Falls Convention in New York state, considered to be the first women’s right convention. Both Richardson and Felice will be interviewed on Tuesday, June 4 on UPR’s Access Utah (UPR is co-sponsor of the Monday night event).

Bullock, one of the co-directors of this year’s Bennion workshop, notes that abolition and women’s suffrage were issues often intertwined during the 19th century. Felice, for her part, “will represent the thinking and strategies back in the 1840s,” said Bullock. “She was involved in suffrage for decades.”

But as the decades progressed and the nation survived a brutal civil war, “there were periods where the causes diverged and people had to make choices — ‘Are we going to go for votes for black men first, or white women?’” said Bullock. In 1870, the U.S. Constitution was amended to give African-American men voting rights. However, those advances were soon largely wiped out by Jim Crow laws in the South.

“We’re hoping that many of the things they will bring out from the 1800s will resonate today,” said Bullock.