Bennion Teachers'  Workshop to explore beginnings of our democracy 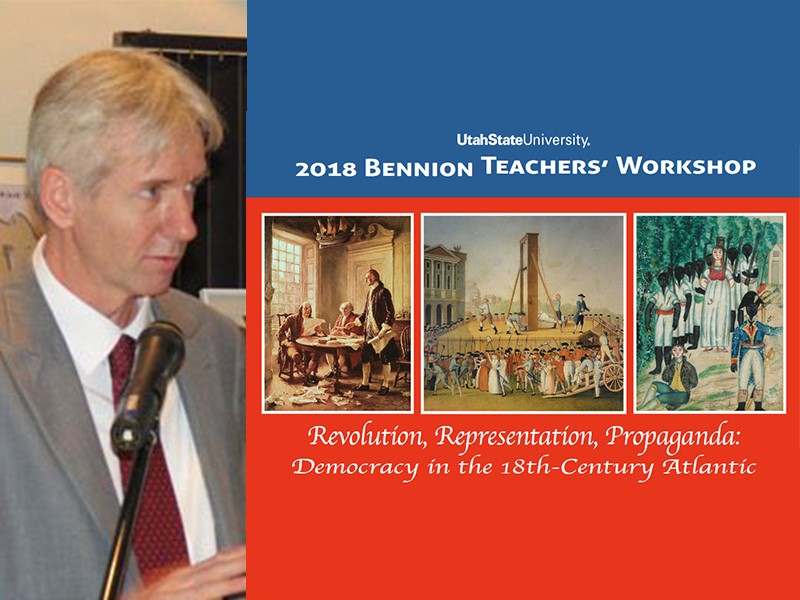 Wim Klooster, a professor of history at Clark University, will present the keynote speech for the Bennion Teachers' Workshop at 6:30 p.m. Monday, June 4.

Our images of the American Revolution often depict men in white wigs, so it may be a surprise to learn that many of our founding parents were actually twenty-somethings.

As Americans, we focus on this particular rebellion, but it was one of three earth-shaking revolutions within a period of just four decades. In 1789, Madame Defarge unpacked her knitting needles in front of the Bastille, and, in 1801, the Haitian Revolution ended with the creation of the world’s first-ever black republic.

One commonality these three revolutions share is something historian Julia Gossard wants to convey to her students. Each is “a moment of youth activism in the past,” she says. Because of the era’s penchant for white wigs and powdered hair, we view the participants as “old and wise and sage,” she says. But “some of these people are very young. Some were just starting out in their lives.”

That’s one of the message she’ll present as 2018 program director of the Bennion Teachers’ Workshop for the Perpetuation of Democratic Principles. Coordinated and sponsored by the Mountain West Center for Regional Studies in the College of Humanities and Social Sciences, the  June 4-8 workshop is in its 24th year. The title of this year’s gathering is “Revolution, Representation, Propaganda: Discovering Democracy in the 18th-Century Atlantic.”

Secondary-school teachers are the primary audience of the annual workshops that all explore some aspect of democracy. The public is invited to the keynote address on Monday, June 4.

Wim Klooster, a professor of history at Clark University in Massachusetts, will present a public lecture at 6:30 p.m. in room 207 of the Eccles Conference Center. It is free and open to the community.

Klooster, whose lecture is titled “Discovering Democracy in the 18th-Century Atlantic,” is an authority on comparative resolutions, says Gossard. He’ll speak about the newly released second edition of his work Revolutions in the Atlantic World: A Comparative History (NYU Press).

Evelyn Funda, associate dean and director of the Mountain West Center, said this annual gathering of teachers discussing democracy “is exciting in how, from year to year, it takes on the question of how we perpetuate democratic principles from such a rich variety of viewpoints.

“There’s a kind of energy that happens in the workshop when you see a middle-school social studies teacher engage with both a college-level composition instructor and a pre-service English teacher on a given topic,” she said.

These calamitous and revolutionary events of two centuries ago matter today because they were “a pivotal time in Western civilization,” says Gossard, an assistant professor of history.

Studying revolutions allows students to “see that questioning whether or not the status quo is appropriate for the current moment is a very good and important thing to do,” said Gossard. “That doesn’t always mean rebelling against power or hierarchy, but questioning whether or not forms of government and social contracts are working for the current era. Perhaps things have progressed in that enlightened sense to something that now needs more negotiation, more movement.”

Those attending the workshop will participate in a four-day role-play simulation of the choices by individual people that led up to the American Revolution. Gossard says students often carry a “nebulous concept” that, when it came to confronting the largest and richest military force of that era, all of the rebels’ hands were raised in favor.
That wasn't the case, says Gossard. Instead, Bennion participants will understand that it was individual choices that led to the collective decision to launch a revolution.

Each participant will be assigned an American Revolution-era character, with equal numbers of patriots and loyalists — labels that are themselves complex topics.  "They're hard concepts because people who are patriots may want reform but not necessarily independence," she said.

The workshop participants will form their arguments for and against war after they research the documents of the era, reading such authors as Thomas Paine and Jean-Jacques Rousseau, as well as the period’s newspapers and pamphlets. “Much like today,” says Gossard, “many of these pamphlets were highly biased and presented false or misleading information to sway citizens to the authors’ platforms and agendas.”

America’s early nation-builders “knew they were in a losing position, but they still made their decision,” she says. “It’s important to have students recognize there are were lot of different things going on here and that government is an experiment — a continuing experiment.”

Other experts from throughout the country will join the conversation by Skype, including Julia Gaffield, an expert on Haiti from Georgia State, and Jessica Grzegorski, a librarian of the Newberry Library in Chicago, and Liz Covart, host and creator of the podcast, “Ben Franklin’s World.” Workshop organizers are also relying on experts within the Department of History, including assistant professor Angela Diaz, an expert of the 19-century Civil War era and Gulf South.  She will speak about the ramifications of the revolution in an often overlooked area – the Gulf South and Caribbean – in the 19th century

For more information on the workshop visit http://mountainwest.usu.edu/bennion/bennion-workshop.