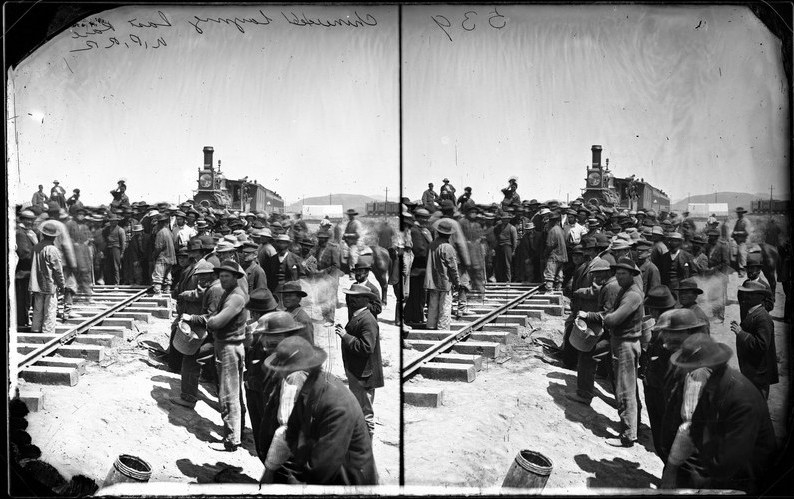 The May 8, 1869, celebration of the 'Meeting of the Rails' at Promontory Point. The photo is doubled because it’s designed for a stereoscope. The photo and antique stereoscope are part of a new exhibit, ‘Tunnels, Trestles, Track,’ created by the USU Museum of Anthropology and now being shown at the Blanding campus of USU-Eastern. Image courtesy of the Collection of the Oakland Museum of California.

“Official” photos of the driving of the golden spike on that spring day in 1869 show a crowd of congratulatory men in suits and hats.

But a modern analysis shows something is missing.

The photos of the May 8, 1869, linking of the transcontinental railroad are black and white — perhaps reflecting some of the black-and-white legacies left to us by history. Because what’s not shown, and subsequently neglected for many years, is the muscle behind the miracle.

A new exhibit at Utah State University-Blanding focuses on the tens of thousands of Chinese immigrants — the laborers who hacked, pounded, hefted and dynamited to bring the transcontinental race to a finish line at lonesome Promontory Point in Box Elder County.

“Tunnels, Trestles, Track,” now open through April 12, features large explanatory panels of the harsh conditions and relentless grind endured by the laborers. There are also artifacts of the material culture — gaming pieces, for example, and engraven rice bowls — they carried with them. The exhibit can be seen in the Health Science Library Building, 576 W. 200 South, Blanding, between 8 a.m. and 5 p.m. Mondays through Fridays. It is free and open to the public.

The exhibit was created by Molly Cannon, professional practice assistant professor and curator of the Museum of Anthropology at USU’s Logan campus. An archaeologist, she drew on her long experience searching for remnants of the immigrants and pioneers who once flourished — indeed, in communities of a thousand-plus people —  in the dusty stretches of west Box Elder County. Very little evidence of that life remains.

The exhibit offers a view into the lives of these Chinese men, who actually made up a majority of the rail crews in the West. They worked alongside Euro-Americans, said Cannon, but earned much less and, unlike their co-workers, had to pay the rail companies for their housing and food.

After its stop in Blanding, the exhibit travels in April to the museum at Silver Reef, a ghost town in Washington County, about 18 miles north of St. George.

“Tunnels, Trestles, Track” is based on research still ongoing by USU’s Anthropology Department, in partnership with the Utah Division of State History. A Utah Humanities grant funded the exhibit. Ken Cannon, USU’s archaeology director, was awarded the project to document immigrant occupations — “Chinatowns” on the fringes of larger towns — at three different sites along the railroad.

In Utah, Chinese workers could be found wherever railroads were being built, primarily in mining sectors. But the USU work focuses on three once-thriving towns you’ve likely never heard of: Lampo, Bovine and Terrace. Terrace, the largest of these towns in the Great Salt Lake Desert, at one point housed more than a thousand people.

Many Chinese men came to the United States in the mid-19th century, said Cannon, fleeing a chaotic political background in China and drawn by tales of free gold in California. It’s estimated between 100,000 and 200,000 immigrants arrived in the United States from China in the 1860s.

Records suggest that at least 10,000 Chinese worked in Utah, Molly Cannon said. They likely lived in segregated quarters, largely in “dugouts with tent structures over them,” she said. The towns themselves existed for decades to repair and maintain the railroad, basically completing work overlooked in the rush to Promontory. “The workers may have moved to more permanent structures,” she said. “We just don’t know the history well enough; it hasn’t been documented.”

What archaeologists did document was the East Asian material culture the Chinese left behind. In sites across the West, archaeologists have uncovered ceramic bowls, dice, toothbrushes and flat spatulas for wok cooking. Cannon displays a ceramic rice bowl with hanzi characters spelling out the phrase “double happiness.” There’s a ginger beer bottle and what look like coins but are likely gaming pieces.

“They were living in a communal setting that would have had a cook and a single kitchen where they’d eat together,” she said. “They lived communally, which I don’t think was forced — it was a choice.”

The 1882 passage of the Chinese Exclusion Act halted Chinese immigration and left many Asians isolated and unable to reunite with their families. It remained law until 1943 when Chinese people were finally eligible for American citizenship.

This year, as Utah and its neighbors honor the 150th anniversary of the “Meeting of the Rails,” the Chinese labor force has received an overdue spotlight. In fact, the perspective of many Utahns is likely represented by a comment Cannon received from one North Logan resident. “When I heard about the exhibit, I thought, ‘Oh yeah, I know all about that because I grew up here,’” the woman wrote. “Boy, was I wrong.”

Among the other ethnic groups working with Chinese were, for instance, Native Americans. And there were many newly converted Mormon men who’d arrived in Utah and were soon put to work by Brigham Young to repay their passage. “But,” adds Cannon, “that’s another exhibit.”

After the “Tunnels, Trestles, Track” exhibit’s stay at Silver Reef through June, is can be reserved to appear at other locations, said Cannon.