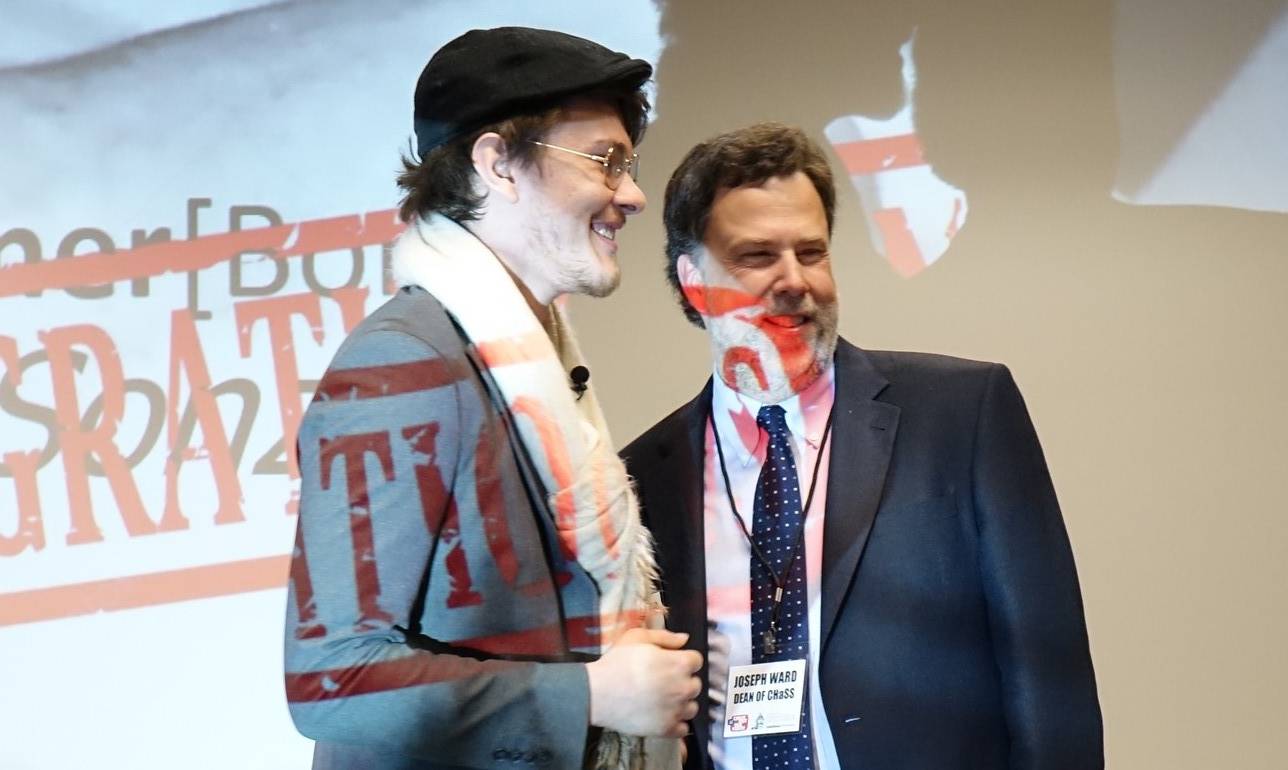 Conner Bond accepts his CHaSSy Award from CHaSS Dean Joe Ward. Bond's video, "Sonzai," was named the top video in the first-ever Check Out This Video! Film Festival, aka The CHaSSy Awards.

There was popcorn, red carpet and flashing cameras. Winning cinematographers showed off their statuettes (the CHaSSys). The tuxedoed emcee politely applauds.

That was the scene March 1 at the first-ever Check Out This Video! Film Festival, featuring short videos. CHaSSy Award winners were announced at the ceremony. The competition was hosted by the English Department and sponsored by the College of Humanities and Social Sciences. 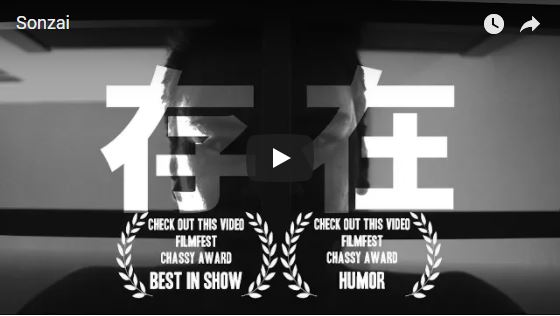 McNeill said it was the perception that “CHaSS students are often not  recognized for their digital and technological prowess” that inspired the three  to organize the festival.

In the end, however, more than 20 videos were submitted by students in disciplines throughout the university, from theater arts and marketing to biological engineering and dietetics.

English is well represented among CHaSSy competitors, though, and the judges came from English faculty and staff. In fact, says McNeill, the organizers’ first impulse was to call the awards the “Ray Bees,” thinking of the English Department’s location in Ray B. West Building. Thankfully, that didn’t happen.

Video is merely an evolution in writing, says McNeill, and many English classes have abandoned what she describes as “old school forms of essay writing and reports.”

Today, adds Colton, “we conceptualize writing as much broader than the traditional. We think of writing in web design, document design and videos. We can see many of the things we learn about writing playing out in videos.”

Students who are pros at social media often don’t associate their thumb-racing with formal writing, said Colton, who reaches technical writing.  “They’re shocked” to learn they’ll be going beyond the five-paragraph essay, he adds. “But usually by the end of the class they’re like, ‘I love that this was part of English’. Or, ‘This is humanities? This is so cool.’”

McNeill points to the paradox now faced by faculty members who teach communication. “We’re at an interesting, in-between point societally, where there’s still enough people around who are old enough to see social media as a fringe thing. But now it’s a necessary part of every business, promotions, outreach, anything. It’s a skill set that students need to learn.”

Check out Sonzai and the other winning videos